While there are many adjectives that could be used to describe Roger Waters and his Us + Them Tour, triumphant would certainly have to be at the top of the list. 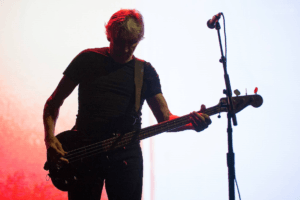 As thousands of faithful Waters and – inevitably – Pink Floyd fans trooped through the doors of Spark Arena, expectations were high. By the end of the evening it would have been impossible to have found a single person who felt that those expectations had not been met; in full. Waters, now seventy-four may have a new solo album under his belt; Is This The Life We Really Want? delivering some outstanding material – but tonight was all about a mix of the old and the new, with many of the more well-known and revered tracks being given a polish and a more present-day feel to them. But then again, when coupled with the absolutely mind boggling visuals and lighting effects that accompanied them, it soon became evident – sometimes almost heartbreakingly so – that the themes and indeed those thought provoking lyrics are just as relevant now as they were thirty and forty years ago.

As the fans took their seats, one was reminded of the calm before the storm; a serene image of a woman, her head covered, her back turned to the screen as she sat staring out to sea. But as the sky turns red an ominous feeling creeps in, hinting that all is not well in this world in which we live. The stage laid out with an array of instruments was soon occupied by Waters’ accompanying band who remained note perfect throughout the following [just over] two hour set; the arrival of Waters, dressed simply in a black tshirt and jeans heralded by the crowd as if God himself had walked onto the stage, not that Waters believes in God of course, a fact he reminds us of during the final moments of the show. Happy to slink back and just be part of the band to begin with, Waters quickly proved that he can still play bass with a swagger that belies his humble exterior, leaving many of the Gilmour lead songs to the outstanding Jonathan Wilson, who next to Waters was an absolute stand out with impeccable guitar playing and a voice that quite literally brought a tear to the eye.

Animated clocks slowly turned and then sped towards the audience from the depths of the back screen, their ticking disturbingly crystal clear as the sound was pumped through well thought out single speakers stands placed around the arena. A slightly sickly reminder that time is fleeting and should not be wasted. But as Waters stepped up to the microphone for the first time and sang the opening line, time stood still. He’s still got it; the audience collectively inhaling for a split second before erupting in shouts of delight and applause.

While it was easy to become entranced with the theatrics of the show, two band members in particular had a skill set that demanded attention each and every time they opened their mouths to sing. Jess Wolfe and Holly Laessig of the band Lucius with their matching black shimmering attire and platinum bobs; often affixing their Cleopatra styled eyes on the audience and unleashing vocals that soared the lofty heights of the arena with both grace and ease. Barely quarter of the way into the evening and already the show was beyond world class; this was not a concert and yet not theatre either. This was a once in a lifetime experience.

‘Welcome To The Machine’ still gripped throats with long spindly fingers of dread, the animation of a beheaded figure still as confronting as it ever was; the hordes of upstretched arms drenched in red mimicked across the arena as red lights from a specially made carriage high above the heads of the fans suddenly came on, creating an astounding effect and prompting the audience to begin singing along to the track, egged on by Waters himself. With a curled lipped sneer, he paced back and forth along the stage, his tall frame easily recognisable even from a distance; his image projected onto the screen behind him as he gestured again and again to the audience. This wasn’t just about a good ole sing along to your favourite tune, this was an invitation to mentally examine much of the material being laid out by Waters himself and to consider your future decisions.

Nestled nicely back to back were three tracks from Waters latest offering, ‘The Last Refugee’ a noteworthy highlight; it’s lyrics bittersweet as they speak of ‘loves sweet ache’. Yet while his new work is more than worthy of taking the centre stage of his production, Waters ever so slightly plays it safe, leaning more on the work that millions across the world have come to know and love. From the affecting ‘Wish You Were Here’ delivered with heart and soul the audience were plunged into the depths of school days horror as children suddenly appeared along the edge of the stage. Dressed in orange prison style jumpsuits, black bags over their heads, the audience were transported back to the days of roaming the halls of education. As the children tore the bags from their heads the stage lit up, fans springing to their feet as the kids ripped the jumpsuits from their slender frames revealing the word ‘RESIST’ in bold white lettering across black t-shirt’s. Collectively, stage performers and fans chanted those words of rebellion, fists pumping the air with the exhilaration of the moment; the kids from Auckland’s Variety Charity thanked by Waters himself, who from the smile on his face absolutely delighted in their performance.

An intermission gave the audience the chance to scoop their jaws from the floor; prematurely perhaps for Waters had certainly not finished with them yet.

As the crackling of police calls filled the arena, the sound of a helicopter zoomed overhead – the overall sound quality of the entire show easily the best that has ever been heard in this arena – red lights flashing from the carriage above drawing the attention of fans as it slowly descended, coming to rest mere meters above those seated in front of the stage. Before everyones eyes the animals powers station slowly began to take shape, the towering smoke stacks (yes complete with actual smoke!) growing towards the ceiling as multiple screens descended displaying the building itself. 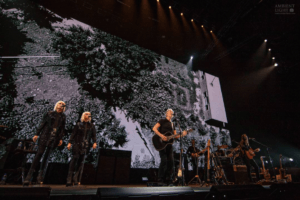 From here it cannot be denied that the show took on a political edge, the words “Please help we are trapped in a dystopian nightmare” and “None are so hopelessly enslaved as those who falsely believe themselves to be free” challenging one and all to consider the current climate we inhabit. ‘Pigs’ (Three Different Ones) saw the audience bombarded with images of Trump, the word ‘charade’ emblazoned across them. Waters looking almost maniacal, sneered and seethed with an inner rage obviously directed towards the POTUS himself, the images of Trump as a toddler and as a pig mocking in their nature; a giant ‘war pig’ drone lazily making its way around the arena. From here we are plunged into ‘Money’, an overlap of Trump’s voice stating that he won looping over the top. Waters may have copped some flak for his obvious distaste of Trump, but tonight it seemed he had most of Auckland on his side. ‘Us And Them’ delivered more thought provoking images, reminding each and every one present to be thankful for what you have, as many have nothing at all; ‘Smell The Roses’ again one of Waters new songs pairing with it perfectly.

The end of the night was drawing near, but Waters still had a few surprises up his sleeve; kicking it off with ‘Brain Damage’ which saw a drone powered silver orb move about the room to the saccharine chords, the lunatics laughter echoed as ‘Eclipse’ saw the arena slowly fill with gentle puffs of smoke. A prism of laser lights stole the breath from the thousands in attendance, rainbow colours springing out from its point; the iconic album cover of The Dark Side of The Moon coming to life in 3D glory. By now, everyone was on their feet, Waters taking a few short moments to thank the audience for making their first show of 2018 something truly special, while praising us for not having a nuclear bomb secretly tucked away somewhere. An acoustic version of ‘Mother’ once again saw Wolfe and Laessig shine, while ‘Comfortably Numb’ saw arms raised and sway in time with Waters as he moved from the left to the right of the stage, arm across his chest, he appeared quite emotional. Taking a few short moments to briefly clasp the hands of those along the front row, Waters returned to the stage for one final bow as pink coloured confetti with the word ‘resist’ printed on it in black rained down from the ceiling.

Beg, borrow or steal a ticket to the remaining dates of this tour – this is a show that must not be missed. 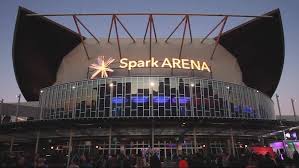 Named for sponsor Spark New Zealand, the venue is located at Quay Park, Parnell, very close to the former The Strand Station. The arena cost approximately $94 million, and of this sum ratepayers contributed $68 million for the facility to be managed by QPAM, the NZ operator, in New Zealand’s first big public-private partnership. This runs for 40 years before ownership is transferred to the city.

After delays due to construction-related issues, the arena’s first concert was Rock Star Supernova on 24 March 2007.