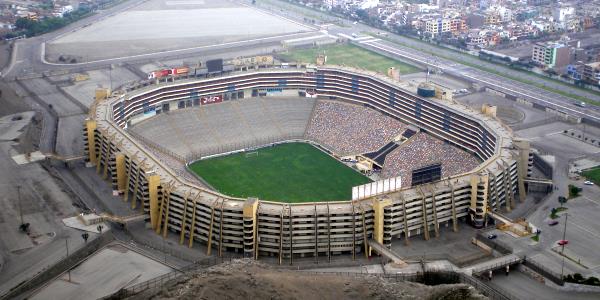 The Estadio Monumental (Monumental Stadium), is a football stadium in the district of Ate in Lima, Peru, home ground of the football Club Universitario de Deportes, which opened in 2000 to replace the Estadio Teodoro Lolo Fernandez. Designed by Progreso International and Gremco S.A., Uruguayan architect Walter Lavalleja Sarriés led the construction of the stadium. It is Peru’s largest stadium and also the largest in South America. It has a spectator-capacity of 80,093; 59,177 seated in the four stands and 20,916 in luxury box suites known as palcos. The stadium was built in accordance with FIFA’s manual of technical specifications for World Cup finals.

The stadium has hosted some of the Peru national football team’s international matches including FIFA World Cup Qualifiers. It also hosted the final stages of the 2008 Copa Perú. However, the Monumental was absent from the organization of the 2004 Copa América because of conflicts between the club and the organizers. In addition, between its opening in 2000 until 2007, only one edition of the Peruvian Clásico was played due to security concerns; however, in late 2008, the derby returned to the stadium.