A sellout crowd at Perth Arena, last night, gladly welcomed the return of Roger Waters to it’s stage, it’s been six years since his last visit, with the amazing “The Wall” tour, and now he’s back for the final leg of his Australia/New Zealand  “Us + Them” tour.

As the crowd filled the arena, the enormous video screen at the back of the stage, showed a girl sat on a beach looking out to sea, and as the sky turned pink, and the lights went down, there was a massive cheer as the set started with “Speak to Me“, merging in to “Breathe” from the classic “Dark Side of the Moon“. Most of the songs came from this era of Pink Floyd, with a few songs from Waters latest album, “Is This the Life we Really Want?”

Throughout the evening the video screen bombards us with images, which are both beautiful and mesmerizing, this is a show is that really is a joy for all of our senses!

My personal favourite “Time” had 3D images of clocks coming out of the screen, and is sung by the guitarist Jonathan Wilson, and with backing female vocalists Holly Laessig and Jess Wolfe, all with amazing voices, it really was a stunning version of the song. The crowd got to participate with the song “Welcome to the Machine” and then followed three songs from Waters latest album, complete with graphic images of war, refugees, and some smiling children.

To finish the first set “Another Brick in the Wall“, is aided by 12 kids from a local choir. All walked on with orange jump suits and black hoods, and as the hoods get ripped off, they sing, and next, off come the suits, and they are all wearing black t-shirts with the word RESIST written boldly on the front. They looked like they were having a great time, as they danced and put their fists up in the air! At the end of the song Roger Waters finally speaks, and we are told he uses local kids for that song on every leg of his world tour, and just how amazing they all are.

Time then for a 20 minute intermission, so we can all have a breather! As this comes to an end and people are returning to their seats, there is the deafening sound of alarms, police sirens, shouting and helicopters, booming out of all the speakers positioned all around the arena, and it goes very dark. The second set begins with “Dogs“, as red lights down the centre of the arena, change to images of buildings with smoking chimneys, and images of big dogs appear. As the guitar solo plays, band members go to a table set up at the side of the stage, and drink glasses of champagne, and put on pig masks! As the drummer and 2 keyboardists continue to play, Roger Waters toasts the audience, to huge applause! This leads to the next song “Pigs” (three different ones), replete with pictures of Donald Trump on the screens, needless to say it was quite obvious what Roger Waters thinks of him! At that point the floating pink pig appears, and floats high around the whole arena. On it’s side another image of Trump and the words “I won” and on the other side the words Piggy bank of war. an amazing piece of technology, the pig finally leaves through the exit door. as the song ends there are numerous quotes from Trump emblazoned on the massive video screen, showing us what kind of a man he really is! The political theme continues as the next song “Money“, sung by Wilson, continues with more images of the US president as well as other world leaders.

The “obligatory Scottish person” Ian Ritchie, saxophone player makes his first appearance for the next song “Us and Them“, again images of poverty, immigrants, and protest marches appear on screen. Roger Waters continues with “Smell the Roses” and the amazing “Dark Side of the Moon“, “Brain Damage” and “Eclipse“, meanwhile a large floating black, silvery orb floats around above us and the lazer lights turn on, to form a beautiful 3D prism, complete with rainbow colours, the unmistakable image from the album! The crowd love it, there is a big standing ovation and applause. It really was mind blowing, and I must confess to having a few tears in my eyes!

There follows a big “Thank You” from the man himself and the words “breath catching time, what shall we do now?” he tells us the audiences here and in New Zealand have been great. He also tells us there’s a lot of love in this room, and that’s what the world needs right now. How true! After the band is introduced, he plays three songs from his last album, “Wait for Her“, “Oceans Apart” and “Part of me Died“, three songs only played here in Perth, and only played once before on the last leg of his US/Canada tour in Vancouver. And, finally for “Comfortably Numb“, the crowd is on its feet and singing. The band take a bow, and the lights go on.

To sum it all up: a visually stunning show, great songs and possibly the best gig I’ve been to for ages! 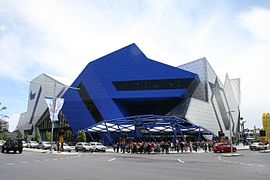 Perth Arena is an entertainment and sporting arena in the city centre of Perth, Western Australia, used mostly for basketball matches. It is located on Wellington Street near the site of the former Perth Entertainment Centre, and was officially opened on 10 November 2012. The Perth Arena is the first stage of the Perth City Link, a 13.5 hectare major urban renewal and redevelopment project which involves the sinking of the Fremantle railway line to link the Perth central business district directly with Northbridge.

The Perth Arena was jointly designed by architectural firms Ashton Raggatt McDougall and Cameron Chisholm Nicol. With its design based on the Eternity puzzle, the venue holds up to 13,910 spectators for tennis events,14,846 for basketball (the arena’s capacity is capped at 13,000 for National Basketball League regular season games) and a maximum of 15,000 for music or rock concerts. The venue has a retractable roof, 36 luxury appointed corporate suites, a 680-bay underground car park, 5 dedicated function spaces, and touring trucks can drive directly onto the arena floor.