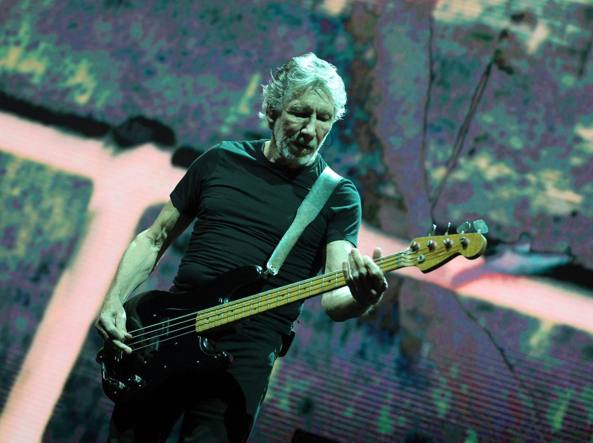 The huge video that stands on the stage is several minutes that shows us a girl sitting on a beach while looking at the horizon. Suddenly the sky turns red blood, turning into a cosmic glow that condenses giving life to the Earth.

“Speak to me” and “Breathe” are the alarm sirens to warn us that it all started. On the stage everything runs perfectly, the sound is clean and dry like never before. Voices, effects and noises bounce from one side of the Unipol Arena to another.

“One of these days”, which the oldest and most football fans will remember as the theme song for “Dribbling”, emphasizes the sound of Waters’ instrument, while we wander the lanes of a supermarket. It’s time to “Time”, dozens of clocks twirl across the screen, to the choirs, the two platinum blondes with sixties make-up, they move at a dance pace.

“For the talented girls,” as Waters called them when presenting the musicians on stage with him, the time has come to confront “The great gig in the sky” and their voices come out without broken bones. With the following «Welcome to the machine» Waters has already folded all the public present in the building to him. Music and images travel with a maniacal synchronism, the changes of position of the musicians happen descending from the back of the stage and not walking on the stage as in a school trip. After three songs extrapolated from Waters’ solo career, it is time to “kill” all those present with “Wish you were here”.

On the screen hands move slowly until they touch and explode into a thousand pieces. The air is missing. The beauty of this song literally takes your breath away. The sound of a helicopter that seems to be ten centimeters from our heads announces the beginning of “The Happiest Days of Our Lives” and “Another brick in the wall”. A dozen teenagers dressed as in the Guantanamo prison camp create a barrier on the stage, removed the uniform and show a t-shirt labeled «Resist». Ending another piece of history Waters thanked the boys and announces a twenty minute break.

With the second part of the concert the technological aspect of the live shows itself in all its majesty.

Huge screens fall on the parterre and create the famous London power plant immortalized on the cover of «Animals», complete with steaming chimneys. «Dogs» anticipates «Pigs (Three Different Ones)», on the screens appears Donald Trump revisited in different artistic versions, while a huge pig, with his face, starts to fly on the heads of the public.

Waters continues with “Money” that sends on the screens images of the powerful of the Earth, obviously there are also Italian representatives, the piece ends in “Us and them” and the powerful are replaced by the faces of kids, pacifist demonstrations, walls erected borders that end up in the sea, tanks that shoot, helicopters that spew fire and flames, hundreds of people rummaging through the waste.

See and listen, while you feel empty inside. A roar of the audience accompanies the appearance of a pyramid made of beams of light that overhangs the parterre, the prism entered in the legend reminds us of an epoch-making record. “Eclipse” echoes as a huge silver ball hovers over our heads.

We have arrived at the end. «Mother» and «Comfortably numb» close the concert. Waters introduces the songs with a long thanks to the public, with a story of how beautiful the landscape is seen by traveling the distance between Milan and Bologna, exhorting the audience to remain human.

Dozens of beams of light intersect, a shower of luminous confetti covers the audience, Waters and his musicians bow to the audience. We arrived at the terminus. This concert will enter my personal list of the most important live shows of life.

Unipol Arena (previously known as Futureshow Station and PalaMalaguti) is an indoor sporting arena located in Casalecchio di Reno, Province of Bologna, Italy. The seating capacity of the arena for basketball games is 11,000 people, and the seating capacity for concerts is 18,000 people. It was opened in December 1993. It is currently home to the Virtus Bologna basketball team.

During the year 2008, the arena had restyling works, which included a new museum dedicated to Virtus’ history, four new JumboTrons, new white seats and black stairs, and new white parquet. In October 2011, the arena changed its name to the current Unipol Arena, in a name sponsorship marketing deal, which was scheduled to last through 2016.