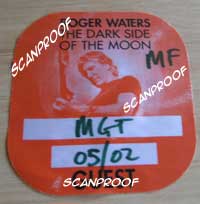 Having seen Roger perform in Sydney the week before, I set off to the Brisbane concert with my wife (Chris), knowing that I was in for one hell of a show. However, this night was a bit different, as I was going with Back Stage passes, and an invitation to meet Roger himself! 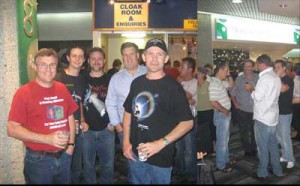 Some of the AFG forum members

We arrived at the venue a few hours early, as we had arranged to meet with a bunch of AFG site visitors & forum members prior to the show. We were supposed to meet at the duck pond near the venue, but that turned in to a bit of a joke, as people were scattered about all over the place. We eventually managed to have some sort of get together inside the foyer, which was nice & handy to food & the bar. Pretty hard to tell, but I estimate that about 40 – 50 people turned up for the meeting.

After greeting as many members as I could, we set off to find where we had to go to meet Roger. Finally making our way to the entrance to back stage.

There were only two other people waiting at the entrance, and it just turns out that they were friends of ours! John Elliott and his lovely partner Jill were waiting to meet their friend PP Arnold. John was AFG’s long time main UK correspondent, but a short while ago, saw the light, and now lives in Australia!

Not so long after, PP Arnold appeared at the door, and John introduced me to her. I managed to grab a quick pic of course! 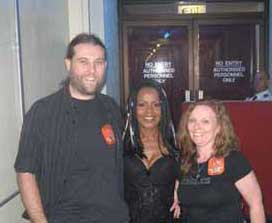 After that, we had to cool our heels a bit, as we had arrived a bit early, and had time to kill. Eventually Darryl Ives, head of Roger’s security came out and met us, and gave us instructions on how we would get to meet Roger & some of the band, and how to get back into the auditorium after our meeting. He then left us in eager anticipation. 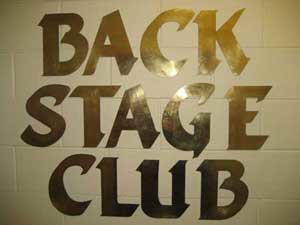 A short time later, Darryl came back to pick us up, and we were quickly ushered through the doors, and suddenly found ourselves backstage!

Suddenly, the world turned surreal. There I was surrounded by people I have been writing about for years, and it was just like a dream.

Jon Carin walked passed and gave us a quick nod, and as we moved on a bit further, Snowy White was standing in a doorway, drinking a cup of tea or something! I just had to stop and clapped him on the shoulder, and had a quick yarn to him. Nice unassuming sort of bloke!

Then we were ushered into a private area and asked to wait. I was looking around to see who else had been invited backstage. I remembered when I first met Roger backstage in Sydney in 2002 that there were quite a number of people there, but this time it was only my wife & myself!

Then a very distinguished chap approached us, and introduced himself. I nearly did a backflip, as it was Roger’s Manager, Mark Fenwick. Mark & I have been corresponding for years, and to finally meet him was an absolute thrill. (Not only is Mark Roger’s Manager, but he is also a very wealthy & well respected businessman in his own right).

I have to say that Mark was very affable & approachable. He thanked me for the work I do on A Fleeting Glimpse, and said that Roger would be along soon, and was looking forward to meeting me!

By now I was floating about 6 inches off the floor, but we still had a bit of a wait in front of us. We overheard somebody say that Roger was having some pictures taken. Now I was starting to get a bit edgy, as I was watching a monitor of the auditorium, and heard the taped opening music starting up, so I knew it wasn’t long to show time!

Then suddenly Roger appeared from around a corner, came straight over to us and shook my hand. I introduced him to my wife, whom he also shook hands with. I have to say that the first thought that I had was that he looked unwell. In fact he was very gaunt, and looked a bit hassled. He also appeared to have lost a lot of weight since the last time I met him in 2002.

Roger apologised that he was running so late, and said that he didn’t have time for too many questions, as he was due on stage. He then told me to keep up the good work on the site! By now I was a complete mess, and blurted out something about seeing Set The Controls performed at UFO 40 years ago, and that I would be seeing it again tonight. I’m not sure he caught all I said, but he did say “oh UFO, yes”.

Darryl then snapped the picture you see here. 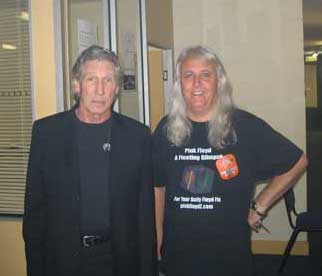 Roger then saw I had a couple of CD covers that I wanted signed. He grabbed hold of them, handed them to Darryl Ives, and told me he didn’t have time to sign them then, but to call back at ‘half time’* to pick them up.

With my heart still pounding, we took our seats, and settled back. There was a sudden commotion in the crowd, and the word was spreading that Eric Clapton had just walked in. (He performs the next night to Roger) but it turned out to be a false alarm, and in fact the crowd were getting excited, and had started up a Mexican wave! 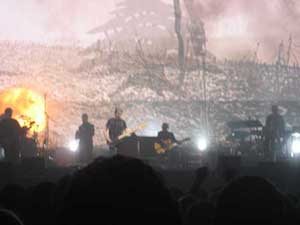 And then the show begun.

The Brisbane crowd were a lot more vocal than in Sydney, and got into it straight away. Many of the songs in the first half received standing ovations, and a few were out of their seats sometimes just getting carried away with it all.

Unlike Sydney, this time we had really good seats, and could experience the surround sound to full effect.

Quite a few mistakes though. Snowy murdered the intro to Shine On, missing just about every opening note, and it took him a few bars to recover. Dave Kilminster also hit a couple of bum notes during Comfy Numb, and there was a bit of feedback during that as well. Roger’s guitar lead came out whilst he was performing Fletcher, which saw a frantic stage hand trying to plug it back in, while Roger was still trying to play it. However, I am being super critical here, as most of the crowd didn’t notice the mistakes, and it certainly didn’t spoil the show one bit. 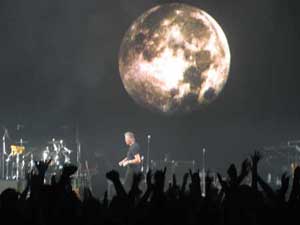 There is no doubt that this is the slickest show in town. The musicianship is brilliant, the visuals mind blowing, and Roger had the crowd eating out of his hands. I really can’t stress enough that this is just a wonderful show to go see, even if you are not a Roger Waters fan, you will still be impressed.

So, there ends the story of an unforgettable night.

I am so grateful to have been given the opportunity of meeting one of my heroes once again. It’s the sort of thing dreams are made of.

* We went backstage again during the interval to pick up my CD covers. Alas, we didn’t get a chance to speak to Roger again, but he did sign them for us! 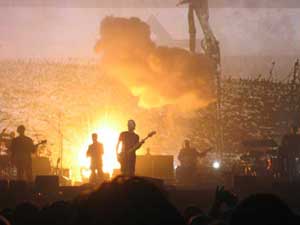 Review/Story & pictures thanks to Col Turner