As the stadium lights dimmed, the sound of a voice, claiming to be mad, crazy laughter, plane engine and helicopter blades reverberated round the packed auditorium, climaxing in the primal scream that opens Dark Side of the Moon. Then I experienced that moment of bliss as Roger Waters and his band launched into Breathe. I was instantly transported back to my youth. Dark Side of the Moon had just been released and it was my introduction to a band that was to become my all-time favourite.

Breathe was followed by One of these Days from the album Meddle, an earlier release, but an album that ultimately spent a lot of time spinning on my turntable. Roger Waters was playing all my old favourites. I couldn’t have been happier.

The show was divided into two sets. The first drew largely from Dark Side Of the Moon, Wish You Were Here, The Wall and Roger Waters latest album Is This The Life We Really Want? released in 2017. Behind the stage, a huge screen displayed ever-changing visuals that added another dimension to the experience of the show. During Time, clocks faces spun and whirred as if they had a life of their own. The audience was lured into euphoria during The Great Gig in the Sky as the accompanying female twin singers launched into the famous, operatic-like vocalization. Sounds and effects of all types darted and echoed around the stadium; a voice from the left, a climatic chord from the right, all in perfect quadraphonic sound.

Set 2 got down to the ‘guts’ of the show. Roger Waters has always spoken out against injustice, the senselessness of war and promoted power to victims. During this set, a row of huge screens descended above the audience seated on the floor of the stadium, stretching from front to back, so people at the sides actually got the best view. Onto these screens, the famous buildings with factory chimneystacks featured on the Animals album cover, were projected and transformed before our eyes.

The messages projected onto the screens were quite confronting and thought provoking, with lots of anti-Trump statements. Many of Trump’s ‘famous’ twitter quotes were projected in huge bold letters, accompanying the songs from the album Animals. The band donned animal masks at this point and of course there was the obligatory flying pig doing rounds of the stadium. Back to the Dark Side, the song “Money” aptly followed quotes about Trump gloating about being rich.

Many of the projected visuals, both still and in direct video form, were postarized, or used the tone-drop effect in bold, complimentary colours. This style of art was at it’s height in the 1970s and has stood the test of time.

During Us and Them, the title of this Australian tour, images of bombs exploding and children scavenging through garbage dumps were graphically displayed. I found the visuals very contrasting and confronting, compared to the melodic nature of the song, but it gave me new eyes through which to view it’s meaning.

The final visual spectacle came in the form of a giant lazar beam pyramid formed above the audience during Eclipse. Spectrum colours echoed the theme of Dark Side of the Moon and it remained suspended in time for what seemed like an age. A huge inflated ball also circled around the stadium, unlit. Of course it was also a symbol for the dark side of the moon. This was the climax song, end of the show.

However, of course the crowd was not going to let the concert end there. Roger Waters and the band came back with Mother, and finally Comfortably Numb, both from The Wall. What a fitting end to an amazing concert. Roger Waters has aged well, like a well-cellared red wine. He only keeps on getting better. His final tribute was to hold aloft the Aboriginal flag. No more words are needed. 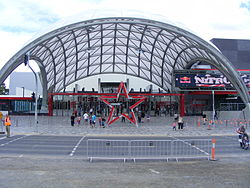 Adelaide Entertainment Centre (AEC) is an indoor arena located in the South Australian capital of Adelaide, and is used for sporting and entertainment events. It is the principal venue for concerts, events and attractions for audiences between 2,000 and 12,000. It is located on Port Road in the suburb of Hindmarsh, just north of the Adelaide city centre.