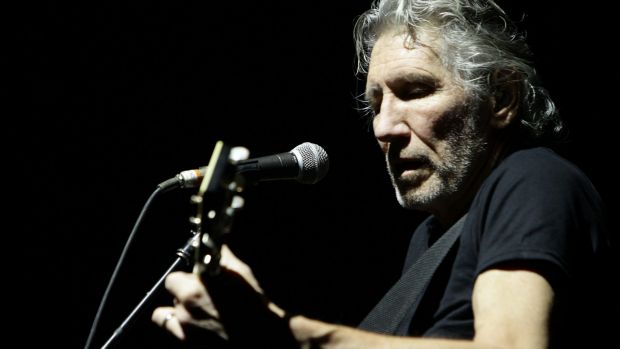 Roger Waters’ Us + Them concert toured the US for six months last year. Its centrepiece is a ruthless takedown of Donald Trump that casts the US President as the “big man, pig man” of Pink Floyd’s 1977 song Pigs (Three Different Ones).

So hostile are the depictions and brilliantly bitter is Waters’ performance, you wonder: how did it feel last May in New Jersey’s Meadowlands Arena when the tour’s first show was played on the three-month anniversary of the Trump presidency?

Waters was last in Australia in 2012 for The Wall Live. Us + Them eschews the single album approach to tap all four of Pink Floyd’s classics: Dark Side Of The Moon, The Wall, Animals and Wish You Were Here.

Each album comes yoked to an iconic stadium spectacle – and no theatrics are overlooked.

There’s the row of locally-sourced schoolkids drolly chanting Another Brick In The Wall and the inflatable pig bobbing around the stadium. And, rising magically, to slice the arena in two, we get the factory edifice from Animals, complete with steaming chimneys.

The arena dims for the Dark Side Of The Moon pyramid, etched out by lasers and refracting rays of prismatic light.

David Gilmour’s parts are sung faithfully by guitarist Jonathan Wilson, who Waters tells us is “the hippy every band needs”. Jess Wolfe and Holly Laessig, meanwhile, bring a subtle Celtic tone to gospel backing vocals that can otherwise be overwrought.

The surround sound kicks in on Welcome To The Machine. Though even aural gluttony is best in moderation. Had Waters done an encore I’d have left with the ear equivalent of the furry teeth and sugar crash you get after bingeing on junk food at the 3D movie.

Combined with the visual extravaganza and the $100 tour hoodies, you wonder if Waters, who’s maintained a decades-long disgust for greed and hypocrisy, might not turn the occasional blind eye to excess. Become comfortably numb, maybe?.

Amid all the sharp and shiny production, all Waters really need do is strap on his bass and sing lines such as “Hey you, White House/ha, ha, charade you are” in a voice that’s fallen to earth and grown gravelly with time. History keeps repeating for these silver fox rock stars and, with minimal legwork, their words of 40 years ago are relevant again.

Yet he does more. He doesn’t let his anti-war and anti-establishment themes merely “resonate” but gets behind modern protests such as Resist and Black Lives Matter. He shows footage of families rifling garbage to survive and aerial shots of bombed-out towns.

He shows “us and them”. So when he throws his fist in the air we can believe he believes it too. 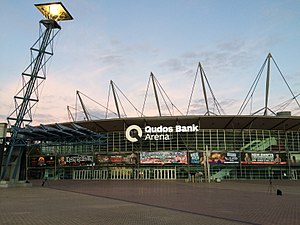 The Sydney Super Dome (currently known as the Qudos Bank Arena or The Q) is a large multipurpose arena located in Sydney, Australia. It is situated in Sydney Olympic Park, and was completed in 1999 as part of the facilities for the 2000 Summer Olympics.

The A$190‑million facility was designed by COX Architecture and Devine deFlon Yaeger; and constructed by Abigroup Ltd and Obayashi Corporation with environmental factors in mind; however, the air-conditioner unit for the facility used HCFCs and was said to be a breach of the Green Guidelines for the Olympics. Bob Carr, premier of New South Wales, officially opened the stadium in November 1999.

The arena is ranked in the top 10 arenas worldwide. It is currently managed by AEG Ogden. For three consecutive years the venue has been a finalist for the Billboard Touring Awards in the top venue category.