Roger Waters is not an artist like the others. At home, each agreement is a committed act. His new album, Is This the Live We Really Want? , it is elsewhere. And the bass player, during his media interventions, on the big waves, especially on BFMTV, takes a position on geopolitical issues (Trump, Palestine, Ecology, animal protection). Yes, to go to a Roger Waters concert in 2018 is a little to attend a political rally …

The Grand Stade is therefore arranged as it should be to welcome the musician. Nevertheless, against all odds, only a quarter of the stadium serves as a pit. No explanation has been given on this subject. However, the part of the stadium allocated for the show did not have a hard time filling up … And now the giant screen projects a short film of a girl contemplating the horizon, a real nod to the title ” The Last Refugee “from the latest bassist album.

The show can begin. And the musicians respond directly to the expectations of the fans. Roger Waters follows the great standards of Pink Floyd , namely: “Breathe”, “One Of These Days”, “Time”, “Welcome To The Machine” and “Wish You Were Here”, all illustrated by audiovisual animations linked with the themes addressed by these songs. One example among many others, giant screens display clocks on “Time” … The singing parts formerly performed by David Gilmour find buyers at the talented Jonathan Wilson , and the animations are very pleasing to the eye. In short, it’s a kind of cine-concert that the bassist – who never takes the floor – offers us. That said, the whole remains excellent bill. The septuagenarian alternates the bass and the guitar (when he interprets some of his solo tracks) and leaves his two singers, squaring the same plummet, steal the show during the vocalisms of “Time” and “The Great Gig In The Sky” “. They have no difficulty climbing in the treble. The latter also provide some rhythmic parts and some choreographies, when they are not placed behind their microphone …

The first part (we will learn later that the concert is well separated into two distinct parts and that intermission will allow time for the audience to eat …) is so can not be more classic. The musician’s “political” demands are evoked through songs from his solo album, “Déjà Vu”, “The Last Refugee” and “Picture That,” but this is still measured. In these are discussed the issues facing our society (related to immigration, in particular). The return is rather mixed. The title “Picture That” is perhaps the closest to the standards of Pink Floyd , but it is still very far from the reception that is reserved for the tandem “Another Brick In The Wall (Part 2 & 3)”, the moment the most unifying of this first part. Indeed, some kids from the suburbs of Villeneuve-d’Ascq could push the song during the cult chorus and play the stars for a few short moments … 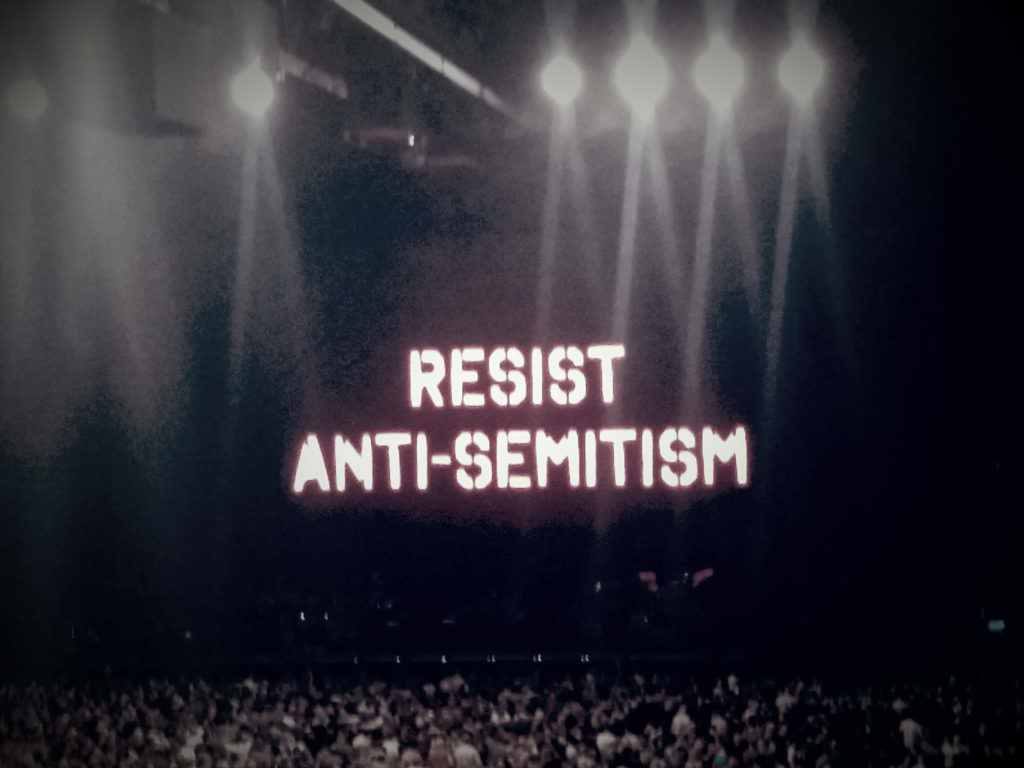 The first part comes to an end when Roger Waters launches: “This is your kids! And that he announces that he and his troops are coming back after twenty minutes of break, well deserved. Without going out of the ordinary, the first part of this “cine-concert” is happy … The acoustics are excellent (samplers come from everywhere in the room), and the group releases a lot, a lot, a lot of emotions, joy, melancholy, confusion and above all, a feeling of revolt …

The entr’acte is in fact a “disguised” break since the director and Roger Waters take the opportunity to bludgeon their audience (who did not ask anything!) Of political messages, thus announcing the color for the following. The musician calls his fans to “resist” and denounces all kinds of fascism and discrimination. It is particularly aimed at the terrible news of the Middle East (and the religious problems that are the cause, and let us say it clearly, the musician calls for the boycott of the State of Israel), but not that …

Among these claims, one could read several other objects of denunciation, like the famous “Big Brother” (in a nod to the work of G. Orwell). The animal cause is defended to end on the projection of the word “DOGS”. The alarms sound, a mini-war scene bursts in our ears – and the configuration of the room evolves. 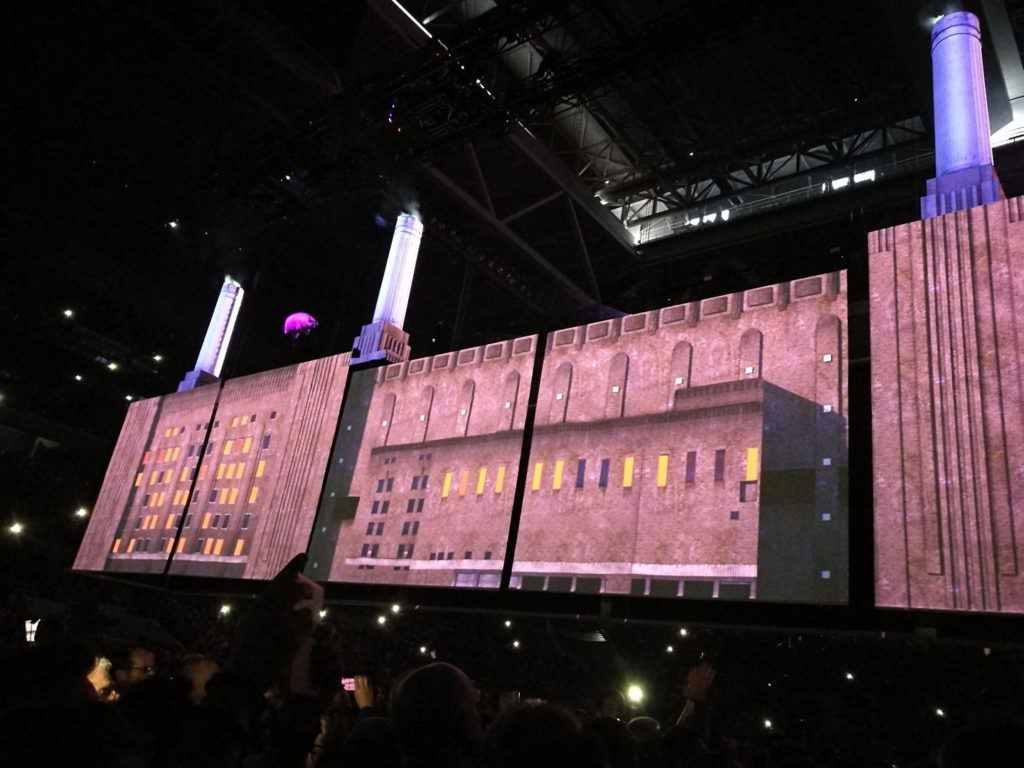 The factory that was used for the artwork of Animals (The famous Battersea Power Station ) is reproduced in 3D way before our eyes, and no detail is left out! The little “mammal”, too, is gaining height … And the thundering “Dogs” succeeds “Pigs (Three Different Ones)”, perhaps the strongest moment of concert – where all the politicians (especially the president of the United States) – take it for their rank. The facade of the factory diffuses committed images, where all policies are indirectly compared to “pigs”. Behind the big screens, Roger Waters and his band play the actors. The face obscured by pig masks, it monkey the fat of this world while a huge pig guided by drones hovers over our heads. Mimicry is absolute, almost disturbing – and the message is even more clear when Roger Waters puts an end to his trial by broadcasting a gigantic: “Trump Is A Pig”. The spun metaphor is extended during the interpretation of the interplanetary “Money” (which sax solo!) Where images of politicians (Le Pen family, in particular) were displayed under opulence.

The interpretation of this part of the album Animals was supported by that of Dark Side Of The Moon , interpreted in its almost complete tonight, with among others “Money”, “Us And Them”, “Brain Damage” for then lead to the grandiose “Eclipse”. He and his lasers reproduce in the hall the most emblematic prism of popular music! So, certainly, each of its tracks have undergone a reinterpretation of the most consistent to be in phase with the ever more political turn that takes the concert over the measures, but the musicality and visual slap is at the rendezvous. 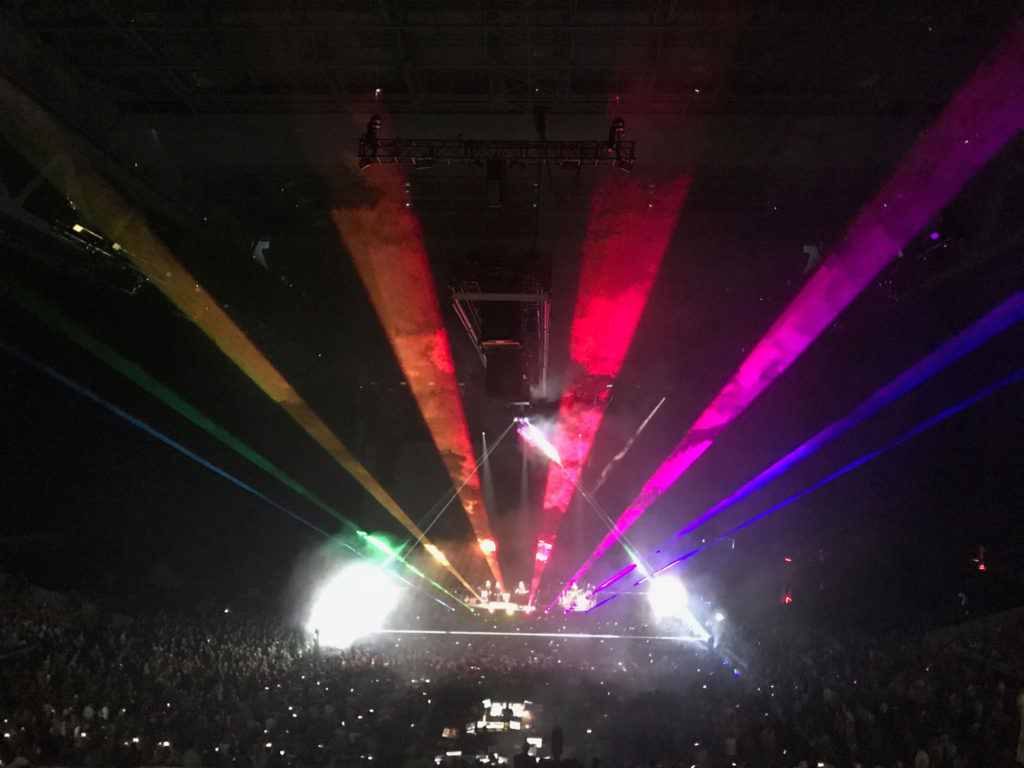 After a political speech (during which the musician tried to have the most total silence), preceded by a short presentation of his talented musicians, Roger Waters brings us a last title, “Comfortably Numb”, transpiring emotion for miles, sung in chorus by an audience that has a hard time saying “goodbye” to a musician for whom the benefits at home are very rare. Last big picture, the father takes his son in his arms, and – always more symbolic – the last projected images call for reconciliation, tolerance and acceptance. The two handles tighten and the loop is looped.

A real lesson of life! The British gave us a concert in the image of his career: great. And although the political turn taken could displease, Roger Waters in Lille, it was THE concert which it was necessary to attend, a show where professionalism never rubbed the superficial.

Stade Pierre-Mauroy has two floors or main levels. The full stadium level or Grand Stade reaches a height of 31 m (101 feet) and has a total capacity of 50,186 seats including 4,965 business seats, 1,842 luxury-box seats, 448 protocol seats and 326 reserved for the press.

The stadium has also a peculiarity: half of the Grand Stade field is situated on hydraulics lift and massive tracks that raise and slide it above the other half of the field in three hours. This creates a second lower level floor plan and surrounding seats called Boîte à Spectacles, where basketball, tennis or music shows can take place. The Boîte à Spectacles can be configured to have a variable capacity, from 6,900 to 30,000 seats. In November 2014, it hosted the 2014 Davis Cup finals between France and Switzerland, where an attendance record was broken for the highest ever officially-sanctioned competition tennis match. In 2017 it hosts the Davis Cup final again.