The show began on “The Dark Side of the Moon,” opening with – like the album itself – the ethereal double-shot of “Speak to Me” and “Breathe.” The musicians then jumped back one album to “Meddle” for a hair-raising take on “One of These Days,” a song that crashed like an avalanche upon the listeners, before returning to “The Dark Side” for hypnotic takes on “Time” and “The Great Gig in the Sky.”

Waters and company sounded particularly great on the “Dark Side” material, reviving the sounds that propelled the album to 45-plus million in worldwide sales and kept it on the charts for a staggering 741 weeks (from 1973 to 1988).

Yet, sound is only part of the story when it comes to any proper journey into the Pink Floyd songbook. It’s also about the visuals, which this tour delivers in breathtaking fashion, mainly through the use of an incredible high-def video screen that runs behind the band, for the width of the arena floor. (Even more video screens come into play for a spell in the second set.)

Add in an old-school laser-light show, which made me wish I’d remembered to wear my bell-bottom jeans, as well as plenty of props and you had the makings of a fully engaging concert experience.

Waters’ one questionable move was playing so much of the new album in one single block, delivering four “Is This the Life We Really Want?” cuts in a row during the first set. But all of that was easy to forgive as Waters drew the first set to a close with such gems as “Another Brick in the Wall Part 2,” which came complete with a guitar solo that proved, without a shadow of a doubt, that Waters don’t need no David Gilmour.

Hope you caught that double negative there. Yes, Gilmour – Pink Floyd’s genius guitarist – will be missed anytime this music is played. He’s one of the truly great ones, as responsible as Waters for the success that this band achieved in its heyday. (Gilmour also occasionally tours, but unfortunately didn’t make it up to the Bay Area during his last trek in 2016.)

Still, Waters had just the right solution to the problem, once again turning to longtime tour mate Dave Kilminster to compensate for Gilmour’s absence. Killminister stole the spotlight repeatedly, as he rose to meet the challenges presented by such fan favorites as “Time,” “Another Brick in the Wall Part 2,” “Money” and, of course, “Comfortably Numb,” a tune that some consider to contain the finest guitar leads in rock history.

Not surprisingly, Waters got a bit political, usually at Donald Trump’s expense. He bashed the 45th president of the United States early and often during the second set, using the big video screens to show Trump in a variety of unflattering ways. Then it was flying swine time – an occurrence that fans have come to expect from Waters/Floyd shows – only this time the barnyard animal had Trump’s face plastered on its side, prompting hundreds to take out their phones and document the moment for later Instagram/Facebook posting.

A mix of “Dark Side” and “The Wall” material brought the evening to a close, putting an exclamation point on a show that all Pink Floyd fans should check out

Thanks to Jim Harrington for the review 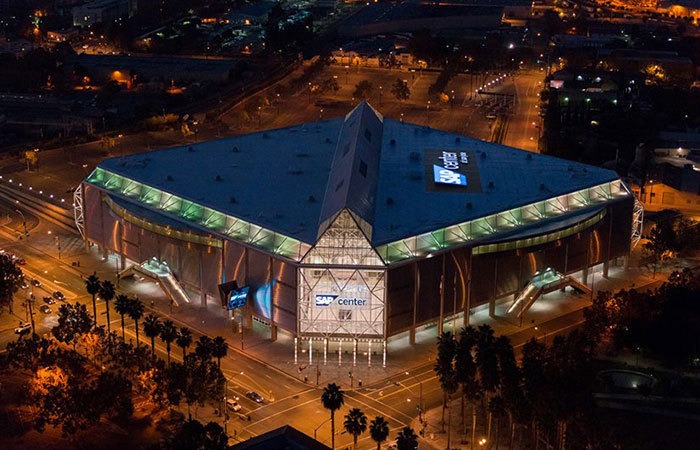 The Venue was known as HP Pavillion until June 2013, When German software company SAP (co-founded by Sharks managing partner Hasso Plattner, who is also SAP’s chairman of the board) purchased the naming rights to the facility in a five-year deal worth $3.35 million per year. The arena was renamed “SAP Center at San Jose” following the approval of the San Jose City Council.

(Thanks go to Robert Carbonaro for sending the ticket scan in.. Enjoy the show !!)