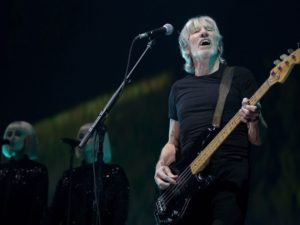 By intermission time at the Bell Centre Monday — the first of three nights at the arena on Waters’s politically heated Us + Them tour — the former Pink Floyd commander had aired a generous number of his old group’s staples and a handful of cuts from his first solo album in 25 years, played by an expansive, impeccable band in front of state-of-the-art widescreen visuals. But when he advised 14,350 acolytes “Do not miss the beginning of the second set,” it wasn’t an idle warning.

Centre Bell (also referred to as the Bell Centre in English language media) is a sports and entertainment complex in Montreal, Quebec, Canada. It opened on March 16, 1996 after nearly three years under construction. It is best known as the home of the National Hockey League’s Montreal Canadiens ice hockey team. It was previously called Centre Molson.

It is currently owned by a partnership group headed by Geoff Molson and his brothers, Andrew and Justin. The same ownership group also owns the Montreal Canadiens and Evenko, an entertainment event promoter. Since it opened in 1996, it has consistently been listed as one of the world’s busiest arenas, usually receiving the highest attendance of any arena in Canada. In 2012, it was the fifth-busiest arena in the world based on ticket sales for non-sporting events.