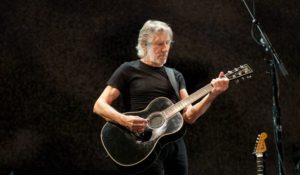 The crowd was roused to its feet when the arena went black, a spotlight from the stage scanning the crowd, and “You! Yes, you! Stand still, laddy!” filling the arena as Mr. Waters began “The Wall“‘s “The Happiest Days of Our Lives” and “Another Brick in the Wall” (parts 2 and 3). A group of children lined the front of the stage, marching in time, all wearing orange prison jumpsuits with “Maggie’s Farm” on the back, to sing the “We don’t need no education” kid’s chorus in “Part 2” — a protest against rigid schooling and complacency.

When the song hit Mr. Gilmour’s guitar solo, the kids tore off the suits to reveal black T-shirts with the word “Resist” on them — a none-too-subtle jab at President Trump — and proceeded to air-guitar and dance with abandon.

“We met those kids today; they’re all from D.C.” said Mr. Waters when the song concluded.

Though almost half of the setlist (10 of 23 songs) comprised cuts from “Dark Side of the Moon,” the big extravaganza of the show was the second half, pulling from Floyd’s record “Animals” (1977). The audience was brought back from a 20-minute intermission to the strains of a police radio, riot alarm and flashing red emergency lights from a rectangle descended from the arena’s ceiling. The large rectangle that spanned the floor spawned working smokestacks out of its top, and the sides became the Battersea Power Station, as on the the cover of “Animals,” with a small pig hanging in its corner.

The songs “Pigs (Three Different Ones)” and “Money” were never subtle commentary on those animals that are “more equal than others,” and this tour, Mr. Waters used it as a visual commentary on his thoughts on Mr. Trump. Mr. Trump was shown in cartoon form as words from the song like “charade,” “joker” and “fat chin” were superimposed over his face. The images included Mr. Trump with Russian President Vladimir Putin holding him, with the U.S. president bearing a cartoonish head attached to a pig’s body.

As the famous Pink Floyd pig floated around the arena with “First Bank of War” on its side, various Trump quotes like “this is more work than my previous life” and “if Ivanka weren’t my daughter, I might be dating her” were displayed. At the song’s end, the factory displayed “Trump is a pig,” to which the crowd let out a giant roar and stood on its feet applauding.

This show has come under some criticism, but the District audience clearly ate it up. As Mr. Waters said later, “Some said we’re going into the lion’s den, but, in fact, we see the audience is lion-hearted.”

It could be hard to top something so bold and brash, but Mr. Waters did, this time in a calmer approach. He wrapped up the set with the hypnotic sounds of “Brain Damage” and “Eclipse,” a silver orb floating over the heads of the band and the audience, as did a giant hollow prism of white light. During the songs, the prism filled with a rainbow of color. These same colors bathed the audience during “Comfortably Numb,” as electric hands on the big screen, which had been shown reaching toward each other and disintegrating at various points in the show, finally joined and held together tightly.

As his final trick of the evening, a mass of confetti with the word “Resist” filled the Verizon Center, just so you remembered not to dwell in that sweet complacency — to not go gently into that good night, regardless of what type of animal you are.

Thanks To Erica Bruce For The Show Summary

The Verizon Center, formerly known as the MCI Center, is a sports and entertainment arena in Washington, D.C.