A year and a half ago, Pink Floyd bassist-songwriter Roger Waters brought his inspired production of “The Wall” to the Pepsi Center in Denver. At the time, my capable colleague Candace Horgan covered the show with aplomb, saying, “At the Pepsi Center, Waters melded elements of musical theater into the performance, and used updated technology to create something even grander than (Pink Floyd’s) original.”

On Monday, Waters again brought the spectacle-filled show to the Pepsi Center – the same show. Same pyro at the beginning, simulating aircraft fire. Same floating pig with the message “Everything will be OK, just keep consuming” on its belly. Same political and corporate imagery of Shell Oil, hammer and sickle and Mercedes logos falling from the sky like bombs.

And again, Waters’ show was masterful. Waters and his team are unstoppable in this quest to remind us of Pink Floyd’s impact in the live arena. His band plays fairly faithful to the original work. He and an additional singer toy only a small amount with the source material. And the creative team took Pink Floyd’s original idea of constructing a towering, menacing, multi-story wall during the band’s performance and later tearing it down – and pushed it over the top.

This titular wall, in all of its forms, is one of the greatest, most artful movie screens of our time.

But because the show was a repeat performance – and because I found it as captivating as my colleague did 18 months ago – let’s stray a little from traditional music writing to talk about one of live music’s most important jobs.

Live music should make you feel. It should fill you with emotion and transport you to another place. From the guitarist’s finger and the singer’s breath, these instruments should move you, emotionally and physically, and that is rarely truer than it is with the music of Pink Floyd.

Of course the band’s music has its reputation with college kids and stoner dads: “The Wall” and “Dark Side of the Moon” were made with marijuana consumption in mind, some might argue. And while countless dudes around us lit up as soon as the lights went out – at the beginnings of both acts, and plenty during – we saw the show completely sober and were really taken out of our seats, out of the arena, in what became one of the most transcendent musical experiences of my life.

Sometimes it was as simple as a costume change. Waters first hit the stage wearing a tight-fitting black T-shirt and matching jeans, triumphantly holding his hands in the air like a boxing champ to the audience that flanked his incomplete stage at each side. But then he donned the floor-length leather trenchcoat and sunglasses of a fascist dictator to start “In the Flesh?,” the first song on “The Wall,” and the mood changed. The half-built wall around this dictator seemed like a metaphor for his people.

During “Another Brick in the Wall, Pt. 1,” a fake helicopter spotlight came out over the audience and a giant marionette of the teacher (a monster with red, glowing eyes) dominated stage left. As Waters points with his, “Hey, Teacher,” you find yourself pointing as well, feeling beaten down, oppressed – until a chorus of 15-plus kids came out for the song’s children’s chorus. The kids, wearing “FEAR BUILDS WALLS” T-shirts, saved the day and the teacher receded – and emotions were calmed when Waters finished off the song on an acoustic guitar.

It was an emotional night. As Waters sang a duet with himself (a 1980 video of him at Earls Court), it was such a triumph that you cheered both of them on. As he sang “Goodbye Cruel World” from the one open spot in the wall at the end of the first act, you felt constricted, surrounded, watched over.

“Hey You” was played entirely behind the wall to start the second act, a potent and smart creative choice that left you feeling disconnected and absent – especially because you could see above the wall that the intense stage lights were going full force, even though the audience couldn’t see anything. “Comfortably Numb” was the most striking moment of the night with Waters pacing in front of the completed wall and the occasional vocal or guitar soloist spotlighted above the wall – and the rest of the band behind it, unseen.

It felt like it sounds: Lonely, with occasional communion and collaboration. It was so powerful that you weren’t surprised to look at the guy next to you in the faded “Dark Side” shirt and see an unexpected tear falling from his reddened eye.

The only disconnect in the show was “Young Lust,” which is also one of the weakest songs on the double-album. Each song had an intimate, often literal connection with the multimedia that scored it, but “Young Lust” and its black-and-white visuals of a desirable, naked woman didn’t connect with each other. Not being a prude here. But the relationship between song and graphics just missed the mark on that one song.

One last shout out to Waters for his very high standards. The band, which randomly included former “Saturday Night Live” bandleader G.E. Smith, was all top-notch. The sound inside the arena was the best I’ve ever heard. And the trip was unlike anything I’ve ever experienced before, sober or otherwise.

Thanks to Ricardo Baca for the review 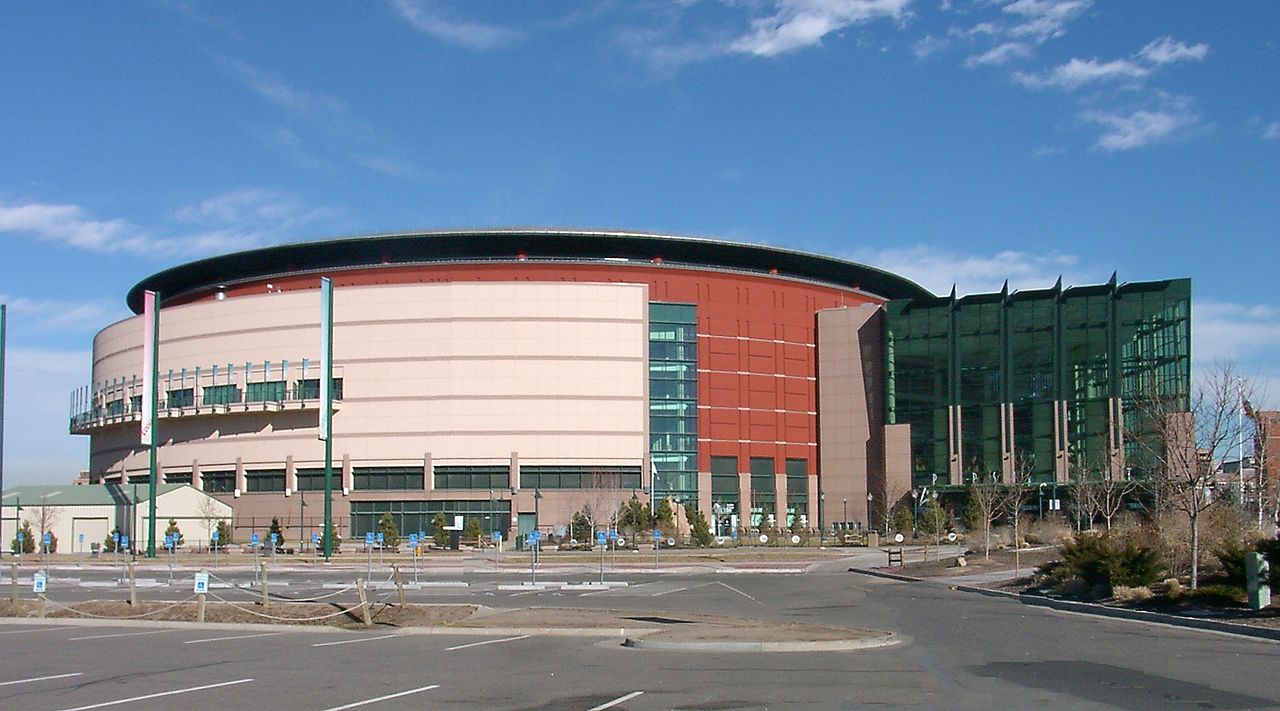 Roger Waters last played this venue on 7 May 2012

Pepsi Center is an American multi-purpose arena located in Denver, Colorado. The arena is home to the Denver Nuggets of the National Basketball Association (NBA), the Colorado Avalanche of the National Hockey League (NHL), and the Colorado Mammoth of the National Lacrosse League (NLL). When not in use by one of Denver’s sports teams, the building frequently serves as a concert venue.