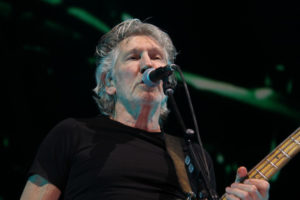 Given the anti-authoritarian themes that circulate through Pink Floyd’s music and founder Roger Waters’ solo albums, it shouldn’t come as a surprise that Waters doesn’t support President Trump. At last night’s epic three-hour show before a near-capacity crowd at the Q, he directed some of his ire at the country’s arrogant leader during a visually arresting and provocative performance.

The concert opened with “Breathe,” a song that included pristine vocal harmonies that would remain constant throughout the show.
“Time” found Waters not only singing the song but also emanating the emotion in the song’s message. His body jolted and he sneered as he spat out the lyrics to this classic track, which speaks about a waning existence.

Former Berklee College Of Music students Jess Wolfe and Holly Laessig, who sing together in the band Lucius and are now touring with Waters in his band, captivated the audience during their version of “Great Gig in the Sky.” The power and emotion in the live rendition rivaled the studio version on Dark Side of the Moon.

The band then launched into the prodding and pulsating “Welcome to the Machine,” before showcasing the first four songs from Waters’ solo release, Is This The Life We Really Want?, his first solo offering in 25 years.

The crowd erupted at the beginning of “Wish You Were Here” and sang each note at such a thunderous level that, at times, it drowned out the lead vocals.

The set ended with “The Happiest Days Of Our Lives” and “Another Brick In The Wall – Parts 1 & 2. A group of ecstatic School of Rock students joined the band for “Brick 2.”

At the end of the first set, Waters told the crowd how the kids ended up on stage on very short notice. Waters recruits local kids to sing with the band at every stop on the tour. Students from the Shaker Dance Academy were originally scheduled to perform, when WKYC taped a segment about how “controversial” and “politically incorrect” Waters is.

The pot stirring proved to be too much for the conservative types running the academy and they quickly pulled out. A call was put in at 3 p.m. to the forward-thinking School of Rock. The group gathered a group of kids, rehearsed the routine into the evening and performed flawlessly. The kids didn’t appear to care about politics; they basked in the once-in-a-lifetime opportunity of performing with rock royalty.

In the show’s second half, during Waters’ rendition of the Floyd tune “Pigs,” a giant video screen behind the stage and another one that hung over the arena floor depicted unflattering images of Trump pointing and gesturing emphatically. The heavy percussion and plodding bass riffs gave the song an ominous feel, and a blimp in the shape of pig with Trump’s picture on it floated through the arena. At the song’s conclusion, the words “Trump is a Pig” flashed in huge print on all of the screens.

“Pigs” gave way to the sound of a cash register that signaled the start of “Money,” another song that included video clips of Trump showing off his wealth. The woozy sax riffs punctuated the tune and nicely set up “Us and Them,” another sax-driven song that included a video treatment of protestors clashing with police.

Waters took to the mic to effectively sing “Brain Damage,” and the song escalated into the soaring “Eclipse.” A giant laser-lit pyramid dramatically emerged at the tune’s conclusion.

Waters’ band meticulously delivered the set’s final song, “Comfortably Numb,” complete with all the exaggerated screams and sinister vocals. The ultraviolet lights that illuminated the arena effectively brought the concert to a climactic close.

As much as the show provided a commentary on war, corruption and false idols, Waters didn’t dwell on the negative. Rather, toward the concert’s end, he congratulated fans for showing him so much devotion. He appeared truly touched by the ovation he received. “In these troubled times, it is good to know not just in Cleveland but throughout the country there is so much love,” he said as he advocated “speaking our minds” in opposition to repressive governments. 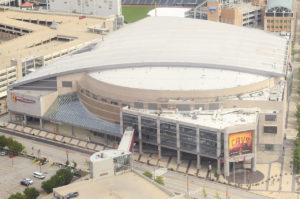 Quicken Loans Arena, commonly known as “The Q“, is a multi-purpose arena in downtown Cleveland, Ohio, United States. The building is the home of the Cleveland Cavaliers of the National Basketball Association (NBA), the Cleveland Monsters of the American Hockey League, and the Cleveland Gladiators of the Arena Football League. It also serves as a secondary arena for Cleveland State Vikings men’s and women’s basketball.

The arena opened in October 1994 as part of the Gateway Sports and Entertainment Complex with adjacent Progressive Field, which opened in April of that year. It is named for the retail mortgage lender Quicken Loans, whose chairman and founder is Dan Gilbert, the majority owner of the Cavaliers, Monsters, and Gladiators. From its opening until August 2005, it was known as Gund Arena, named for former Cavaliers owner Gordon Gund, after he paid for the naming rights. The Q replaced the Richfield Coliseum as the primary entertainment facility for the region and the home of the Cavaliers, and supplanted the Wolstein Center at Cleveland State University, which opened in 1990, as the primary concert and athletic venue in downtown Cleveland.