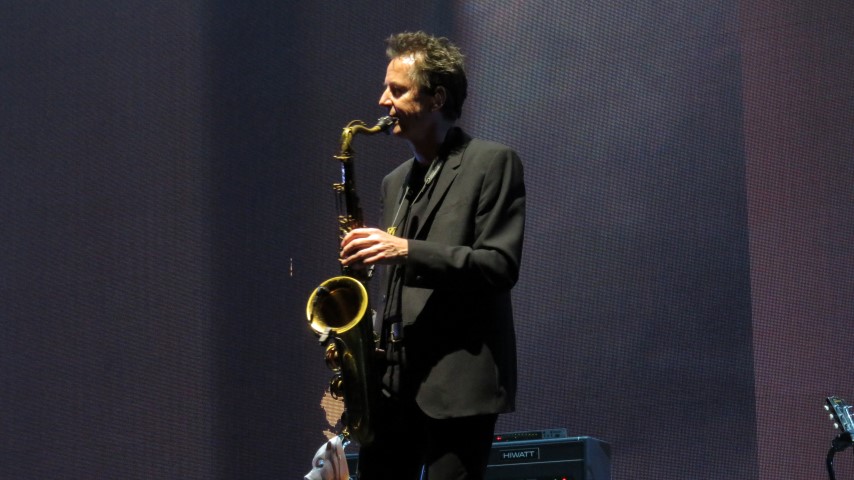 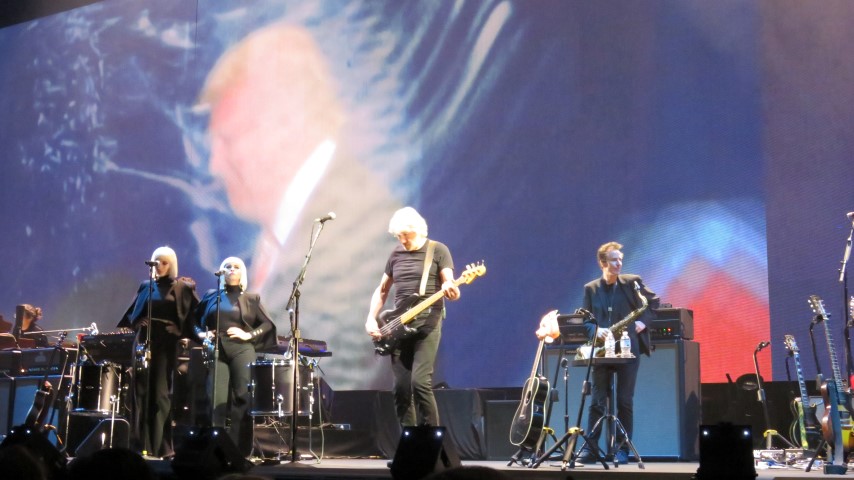 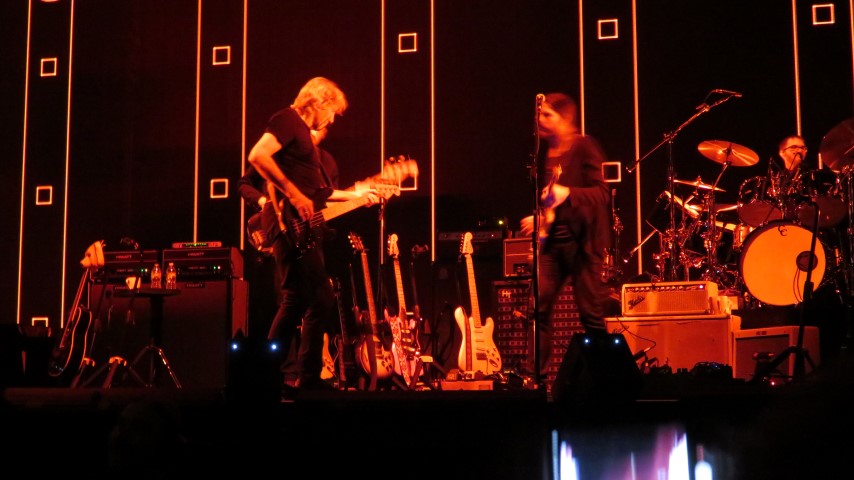 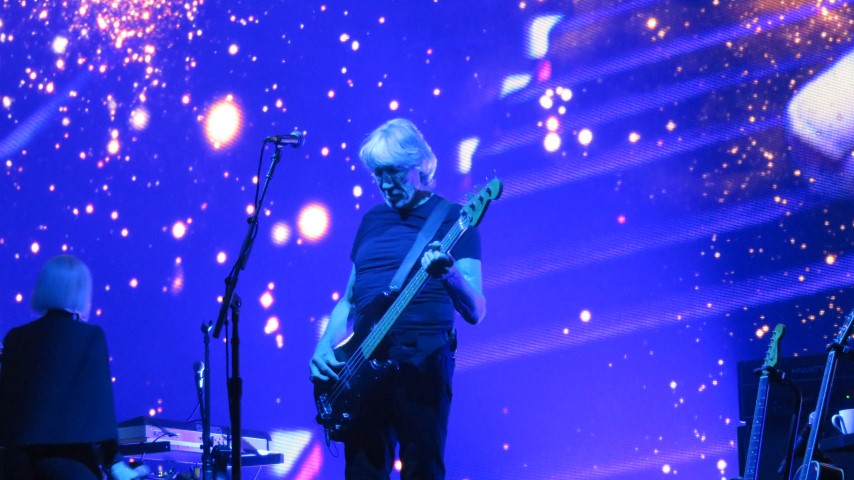 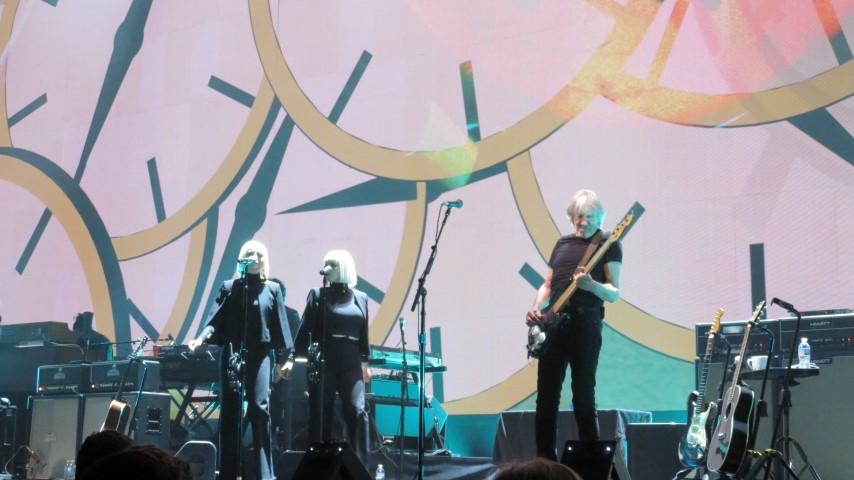 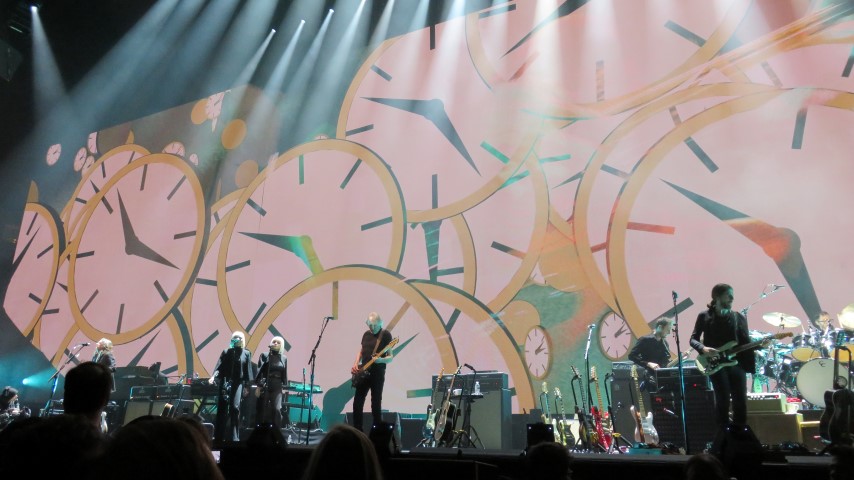 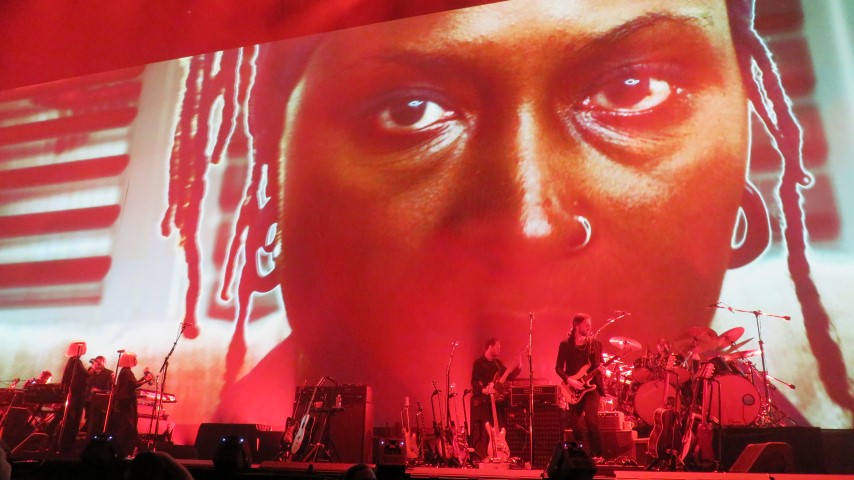 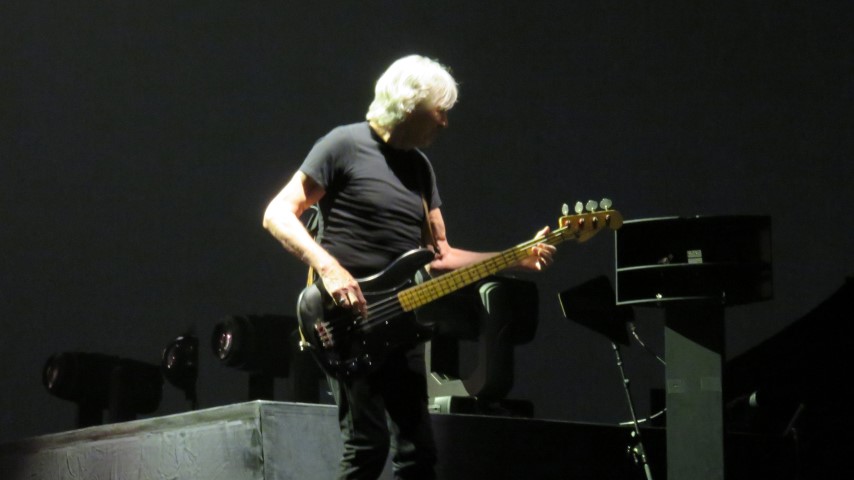 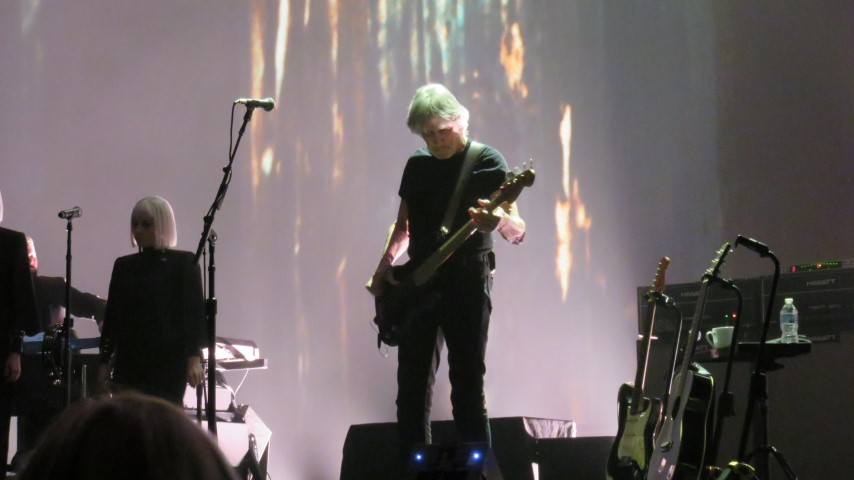 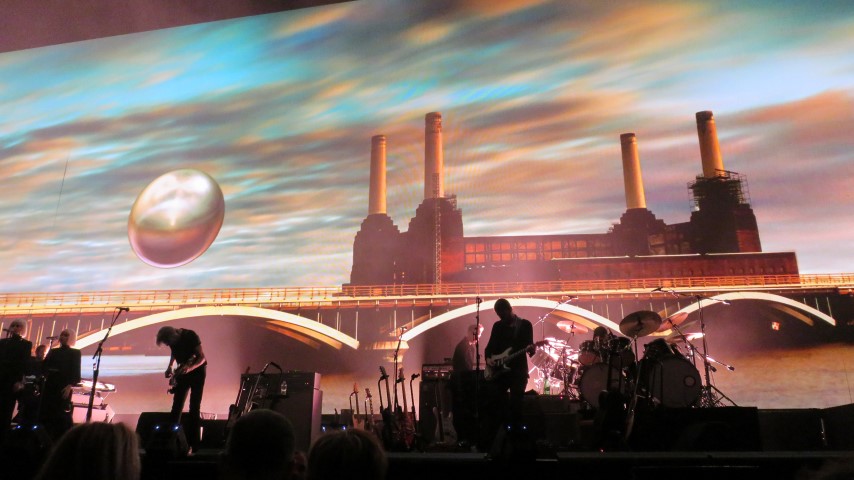 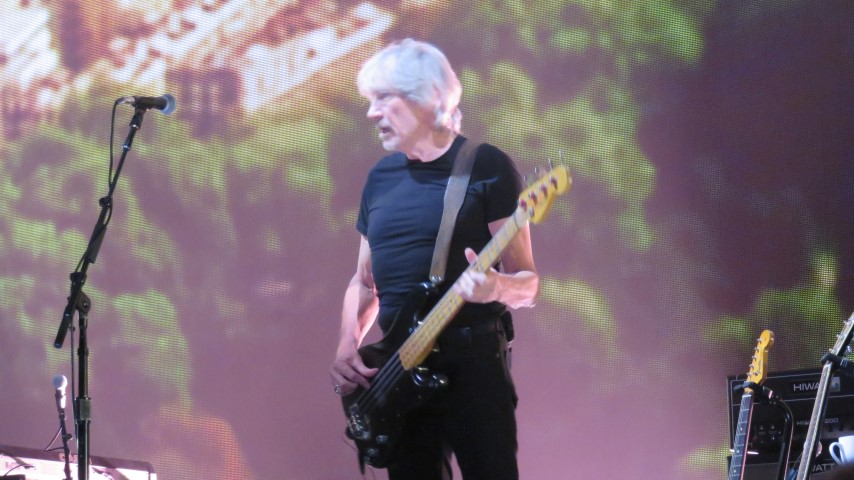 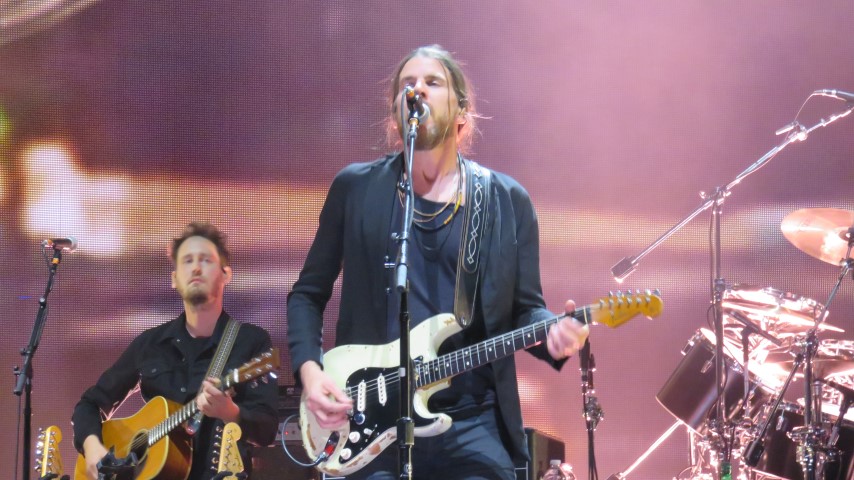 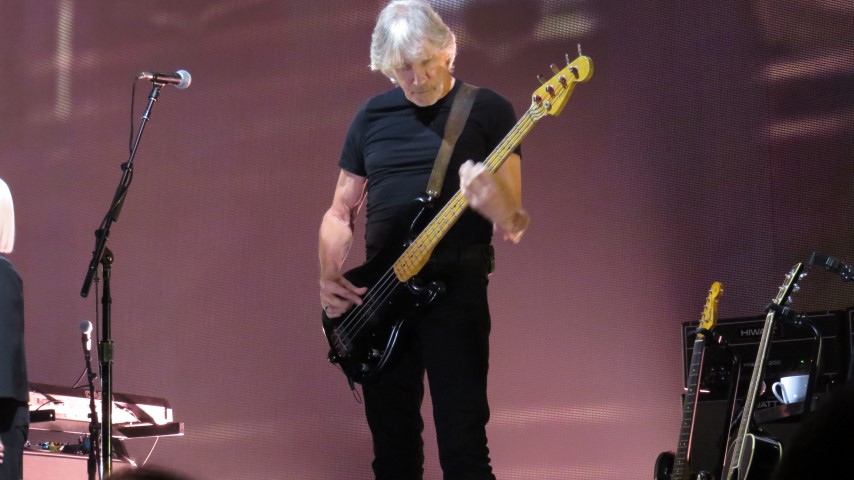 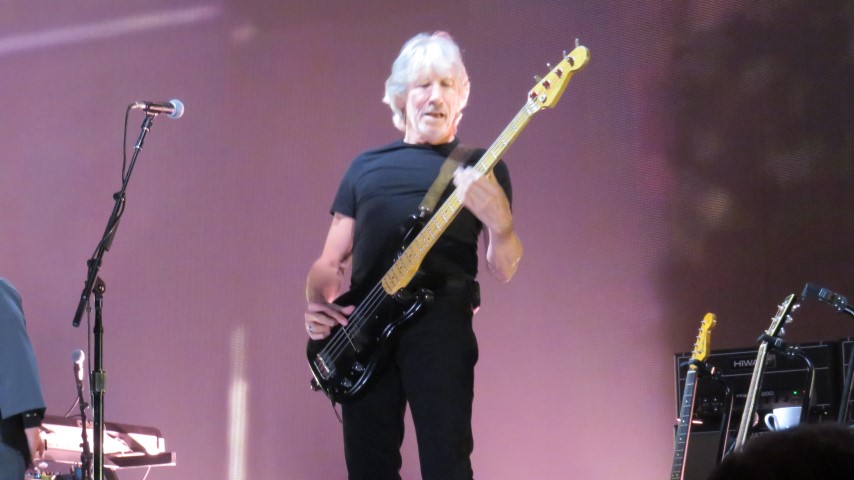 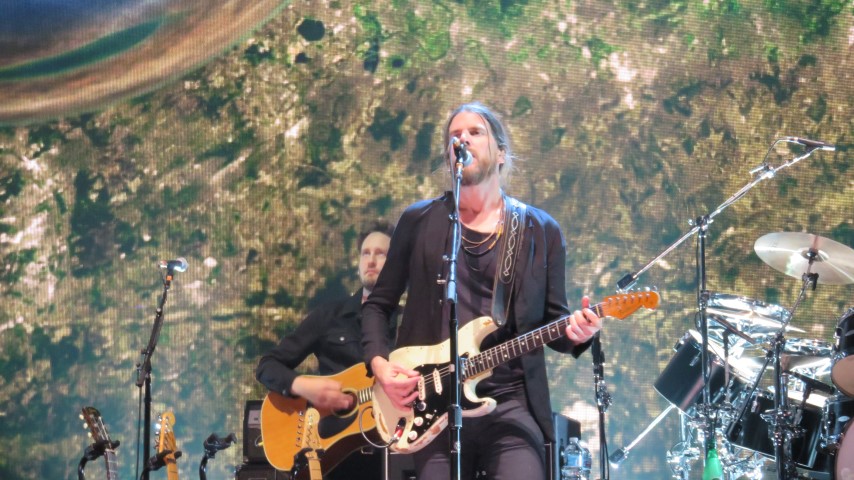 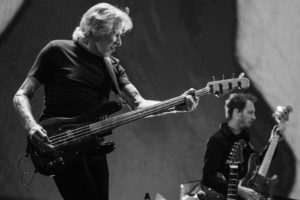 Hanging on in quiet desperation is the English way,” goes a lyric of Pink Floyd’s “Time,” from the band’s fabled album “The Dark Side of the Moon.” But that is not Roger Waters’ way these days, as the veteran English rocker proved Tuesday night at Scottrade Center, performing a concert that rocked and raged, diving headlong into the catalog of his former band, and eviscerating a number of political targets, from U.S. drone warfare to President Donald Trump.

That he did so with material that was mostly on the order of 40 years old speaks to the staying power and prescience of Pink Floyd’s music and to the notion that the more things change in the world, the more they stay the same.

The show was a veritable feast of visuals and sonics, featuring a surround-sound speaker system, a massive LED screen nearly twice as wide as the stage, a laser pyramid that re-created the iconic “Dark Side” album cover, flying inflatables and more.

Another video screen that was to have rolled down over the audience during the second set malfunctioned at rehearsal and was scrapped for the performance. It left inflatable smokestacks meant to help re-create the Battersea Power Station, another familiar Floyd visual, hanging incongruously from the rafters. No matter, since the plant was also depicted onstage. And besides, safety first.

The first set began as a time capsule of classic Floyd material, including “Breathe,” the bass-heavy instrumental “One of These Days,” “The Great Gig in Sky,” with its ecstatic, wordless vocals sung by Holly Laessig and Jessica Wolfe (of the band Lucius), and “Welcome to the Machine.”

Waters dropped in a quartet of new songs from his forthcoming album, “Is This the Life We Really Want?” which sounded of a piece with the Floyd material but didn’t have the impact they might have a week from now, after the album is released and fans become familiar with it.

But the new songs began the evening’s political content, with Waters railing against drones raining down death from above in “Déjà Vu” and offering the line, “Picture a leader with no (expletive) brains” in “Picture That.”

Pink Floyd’s “Another Brick in the Wall” continued in that vein, as a group of local children in orange prison jumpsuits filed onstage for the song’s “We don’t need no education” chant. Later, they removed the jumpsuits, revealing t-shirts emblazoned with the slogan “Resist,” as they danced with abandon.

It was Waters, after all, who, decades ago with “The Wall,” suggested tearing down such barriers rather than building them.

The second set was even more stridently political, especially “Pigs (Three Different Ones),” which featured unflattering (which is putting it mildly) depictions of and odious quotes from the president. Musically, the band was at its most intense, led by guitarist Dave Kilminster, who delivered a long, impassioned solo while, overhead, an inflatable pig with the phrase “piggy bank of war” printed on its side flew a lap around the arena.

The visuals for “Money” paired Trump with Vladimir Putin, failed Trump casinos with the Kremlin and so on.

Subtle it was not, and there were some boos, though it’s fair to question whether people were booing the strident political content or that which was being depicted. If the former, one wonders if those purported fans of Waters’ music are or have ever been at all familiar with it.

The highlight of the set may have been an emotional “Us and Them,” which featured visuals of protesters clashing with police and soldiers. But it was the music itself that packed the greater punch, with vocals by guitarist Jonathan Wilson and the Lucius ladies, and a mournful saxophone solo by Ian Ritchie.

Waters spoke sparingly during the show but near the end thanked the crowd for its overwhelmingly positive response. “Some suggested we would not receive such a warm welcome here in St. Louis,” he said. “Well, we did.”

Thanks To Daniel Durcholz for the review 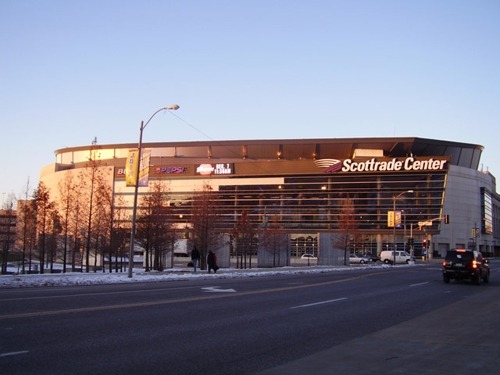 Scottrade Center is a 19,150 seat arena located in downtown St. Louis, Missouri, United States. It is the home of the St. Louis Blues of the National Hockey League. The arena opened in 1994 and was known as Kiel Center until 2000 and Savvis Center from 2000 to 2006. The current name comes from financial firm Scottrade, based in St. Louis, who purchased naming rights in 2006. With the announced acquisition of Scottrade by TD Ameritrade, it is anticipated the arena will be renamed TD Ameritrade Center in late 2017.