At the start of Roger Waters’ second set Sunday at XL Center in Hartford, a message flashed on the video screen suspended above the crowd, spanning the length of the arena: “Please Help We Are Trapped in a Dystopian Nightmare.”

That’s familiar territory for Waters: elements of that theme underpin Pink Floyd’s albums “Dark Side of the Moon,” “Wish You Were Here,” “Animals,” “The Wall” and “The Final Cut,” and a dystopian vision colors the four solo rock albums he’s released post-Floyd, including this year’s “Is This the Life We Really Want?”

Maybe it’s a testament to Waters’ deep skepticism about the nature of people who seek to wield power, or maybe some things simply never change — or both—but songs he wrote 35 or 40 years ago felt as relevant Sunday as new tunes savaging the would-be authoritarian in the White House. With a band that included powerhouse singers Jess Wolfe and Holly Laessig of Lucius, Waters spent nearly two and a half hours mining the Pink Floyd catalog, with a handful of new songs mixed in. (Here’s the set list.)

The singer and bassist stocked the relatively straightforward first half with favorites from “Dark Side of the Moon” and “Wish You Were Here,” which showcased Wolfe and Laessig. They handled the spiraling wordless vocals on “The Great Gig in the Sky” with such mastery that Waters might as well have written the song for them. They at once sweetened and solidified “Welcome to the Machine” and “Time,” adding harmonies on the latter while guitarist Jonathan Martin sang Richard Wright’s part on the chorus. Wolfe and Laessig also added power to a four-song sampler of music from Waters’ latest album (“Picture a shit house with no fucking drains/Picture a leader with no fucking brains,” Waters snapped on “Picture That”), and shepherded a group of local children who came onstage for “The Happiest Days of Our Lives” and parts two and three of “Another Brick in the Wall” to end the first half of the show.

Things really got pointed in the second set. After starting the set with “Dogs,” from 1977’s “Animals,” Waters turned “Pigs (Three Different Ones)” into an excoriation of just one person: Donald Trump. As an inflatable pig floated around the arena, images of Trump as a baby, wearing a Klan hood and cuddling with Russian President Vladimir Putin flickered on the video screens. Every chorus — “Haha, charade you are” — was accompanied by a picture of Trump’s head with the word “charade” stamped over it, and in case the meaning wasn’t clear, “Donald Trump is a pig” appeared onscreen as the song ended.

Waters & Co. stripped away the bombast on the mournful, acoustic “Mother,” which posed an all-too-pertinent question: “Mother, do you think they’ll drop the bomb?”

Most of the visual effects waited until the second half: the screen over the crowd sprouted smokestacks to look like Battersea Power Station from the cover image on “Animals,” and on “Brain Damage” and “Eclipse,” lasers arrayed on the floor of the arena created a pyramid with a prism effect that cut through dry-ice smoke.

After Waters sang “Vera” and did the refrain from “Bring the Boys Back Home,” he and the band brought the show to a close with “Comfortably Numb,” which included a transcendent outro solo from guitarist Dave Kilminster. Perhaps in solidarity with kneeling NFL players, the musicians lined up along the front of the stage on one knee, before climbing back to their feet and waving goodnight. 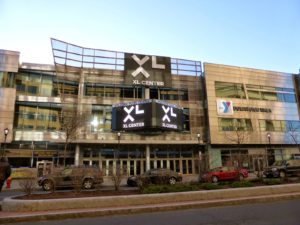 The XL Center (originally known as the Hartford Civic Center) is a multi-purpose arena and convention center located in downtown Hartford, Connecticut. It is owned by the City of Hartford and operated by Spectra. In December 2007, the Center was renamed when the arena’s naming rights were sold to XL Group insurance company in a 6-year agreement. The arena is ranked the 28th largest among college basketball arenas. Opened in 1974 as the Hartford Civic Center and originally located adjacent to Civic Center Mall, which was demolished in 2004. It consists of two facilities: the Veterans Memorial Coliseum and the Exhibition Center.