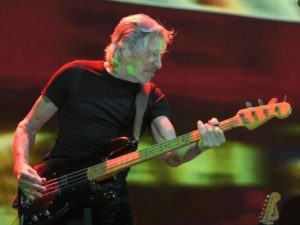 Uniondale – On September 16, Rock and Roll Hall of Famer Roger Waters (formerly of Pink Floyd) performed at the newly renovated Nassau Coliseum on Long Island as part of his “Us + Them” tour, for an excellent turnout.

His entire show was a technological masterpiece from start to finish, with visually striking scenery, as well as creative and psychedelic backgrounds. Waters took the stage promptly a little after 8:10 p.m., and it began with ambient music in the background, with a peaceful scene of a beach with “Spoke to Me.” The stage immediately broke into galaxy scenery for “Breathe.” His guitar player Jonathan Wilson delighted on the smooth vocals of the latter tune.

It was followed by the more aggressive “One of these Days,” where green and red lights dimmed from the stage. This was well-received with a tremendous response from the Nassau Coliseum audience.

The clocks background on the televised screens was appropriate for the percussion driven “Time,” which Waters showcased his crisp, lead vocals. Jessica Wolfe and Holly Laessig of the indie group Lucius, who served as his backing vocalists, were superb on “The Great Gig in the Sky.”

“Welcome to the Machine” was one of the highlights from the first set, which featured an animated background. He managed to get the fans to put their hands up in the air, and he incorporated it as a crowd singalong.

After switching guitars from electric to acoustic, Waters treated his Nassau Coliseum concertgoers to “Déjà Vu” from his latest Is This The Life We Really Want? album, where he showcased his rich, baritone voice on the haunting tune.

“The Last Refugee” featured the song’s music video playing in the background, which began with an expressive, interpretive dance. The iconic rocker was not afraid to speak his mind on the vituperative “Picture That,” which was raw and authentic. Once he lifted up his acoustic guitar at the end of the song, the audience gave him a raucous round of applause

Just when one thought that Rogers could not possibly get any better, he proves everybody wrong again with an empowering version of “Wish You Were Here,” with Lucius’ Holly Laessig and Jessica Wolfe on background vocals.

The first half of his show concluded with “Another Brick in the Wall,” where 10 children took the stage (joining the ladies of Lucius), and the kids were dressed in orange prison jumpsuits, and towards the end, they uncovered themselves (by getting out of the orange jumpsuits), thus revealing their “Resist” black T-shirts. “There are your kids,” Roger Waters said. “They are amazing. You should be proud of them,” he added, complimenting them. They were from the Prodigy School of the Arts from Hempstead.

He noted that they will take a 20 minute break, and then he and his band will do another set.

In the second part of his show, the technology got even more elaborate, with on screen projects at both sides of the stage, with several smokestacks and a giant Anti-Trump pig that was floating around. Waters opened with Dogs,” and continued with “Pigs (Three Different Ones)” and the witty, sassy tune “Money.” “Please help we are trapped in a dystopian nightmare,” one of the quotes read.

He even poked fun at several of Trump’s inaccurate quotations on the televised screens, where he confused 9/11, with 7-11, among others (including his high IQ).

Waters closed his set with “Brain Damage” and “Eclipse,” which featured the gorgeous pyramid, as he took his fans on a trip down memory lane to the early 70’s and the Pink Floyd Dark Side of the Moon album.
For his encore, he performed “Vera,” as well as the sultry “Bring the Boys Back Home” and “Comfortably Numb,” with neat laser lights gracing the venue, which was a beautiful spectacle.
Review Courtesy Of Markos Papadatos

Nassau Veterans Memorial Coliseum, commonly known as just Nassau Coliseum, is a multi-purpose indoor arena in Uniondale, New York, United States. It was open from 1972 through 2015 and is currently undergoing renovation with an expected completion in 2017. The Coliseum is located approximately 19 miles (31 km) east of New York City on Long Island.

Opened in 1972, the Coliseum occupies 63 acres (25 ha) of Mitchel Field, site of a former Army and Air Force base. The facility is located in the Town of Hempstead, within the Uniondale 11553 ZIP code. The Coliseum was used for sporting events, concerts, large exhibitions and shows of various kinds, as well as trade shows — 44,000 square feet (4,100 m2) at the main arena, 60,000 at the Expo Center.

The Coliseum was one of only two venues in the United States where Pink Floyd mounted their limited run of shows for The Wall Tour. Five concerts were performed from February 24 through 28, 1980 one of which was filmed and only appeared as an underground tape. In August 1988, they recorded and filmed the Delicate Sound of Thunder over four nights at the Coliseum.