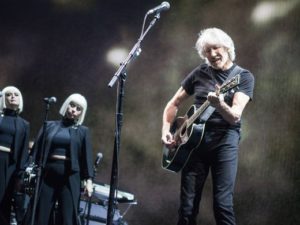 Did Roger Waters even mention Donald Trump by name Wednesday night in the course of his epic performance of classic Pink Floyd songs and new solo material at Gila River Arena in Glendale?

I don’t think he did.

He gave no speeches, no long-winded sermons nor rants.

With apologies to Mr. Springsteen.

Waters’ disgust with the 45th President of the United States of America was fully integrated into the performance, much like last October’s show at Desert Trip while Trump was on the campaign trail.

He’d been on stage roughly 45 minutes Wednesday night before Trump’s image made its first on-screen appearance, during “Picture That,” a track from Waters’ latest solo effort, a concept album whose title asks “Is This the Life We Really Want?”

It was during the part of the song that invites you to “picture a leader with no f–king brains.”

He brought the first set to a rousing finish with a selection of songs from “The Wall,” local schoolkids emerging in orange prison jumpsuits during the “The Happiest Days of Ours Lives.”

The kids removed their jumpsuits during “Another Brick in the Wall” to reveal the word “Resist” emblazoned on their T-shirts, a word that also flashed across the screen behind the stage in giant letters.

The second set was more political than that.

Illustrations of Trump filled the screens during “Pigs (Three Different Ones),” including one of the president’s head on the body of a baby being held aloft by Vladimir Putin while clutching a banner with the Trump-Pence logo on it. Another showed Trump in a car meant for toddlers.

When the legendary flying pig appeared to float above the crowd, one side displaying an illustration of the president with dollar-sign makeup on his eyes, shouting “I won!” The other side read “piggy bank of war” and “bombs and death come out here” with an arrow pointing to the pig’s behind.

That portion of the concert ended with assorted Trump quotes, from “My IQ is one of the highest – and you all know it! Please don’t feel so stupid or insecure: It’s not your fault” to “The point is, you can never be too greedy.”

The concert began with the opening tracks on Pink Floyd’s masterpiece, “The Dark Side of the Moon.” And by the time he followed “Brain Damage” with “Eclipse” in the second set, he’d made his way through nearly every song on that collection.

Other highlights from his Pink Floyd days included “Welcome to the Machine,” “Wish You Were Here” and “Dogs.” And he ended the concert with the suite of songs that closes side three of “The Wall” – “Vera,” “Bring the Boys Back Home” and “Comfortably Numb.”

That still left Waters time to shine a spotlight on a handful of selection from his latest album, including “Déjà Vu,” “The Last Refugee,” “Picture That” and “Smell the Roses.” And it felt like they were written to be featured in that context with those songs from Pink Floyd’s catalog as part of that production. They were of a piece, thematically and musically, allowing the production to flow seamlessly from track to track to track. 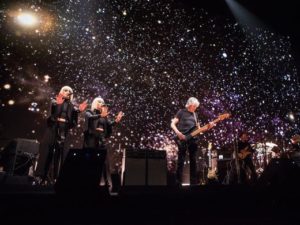 His nine-piece backing band did a great job of bringing the music to life, from the cavernous majesty of guitar leads that managed to channel the magic David Gilmour brought to those original recordings to Holly Laessig and Jessica Wolfe wailing the high notes on “The Great Gig in the Sky” in their matching blonde wigs and black dresses.

Of course, it helped that they were being filtered through a 3D surroundsound speaker system.

Anyone going in looking for next-level rock-and-roll theater of the sort he brought to Desert Trip last fall? We got that, too.

As dazzling as the video production in the first set may have been, he saved the more impressive bells and whistles for the second act. That’s when the Battersea Power Station pictured on the cover of Pink Floyd’s “Animals” appeared above the crowd, its smokestacks as it sliced through the heart of the venue, allowing for even more video images to be projected.

As he prepared to launch the tour, the bassist promised, “It’ll be spectacular like all my shows have been.” And he delivered on that promise with a concert that felt as conceptually unified as any of his albums. 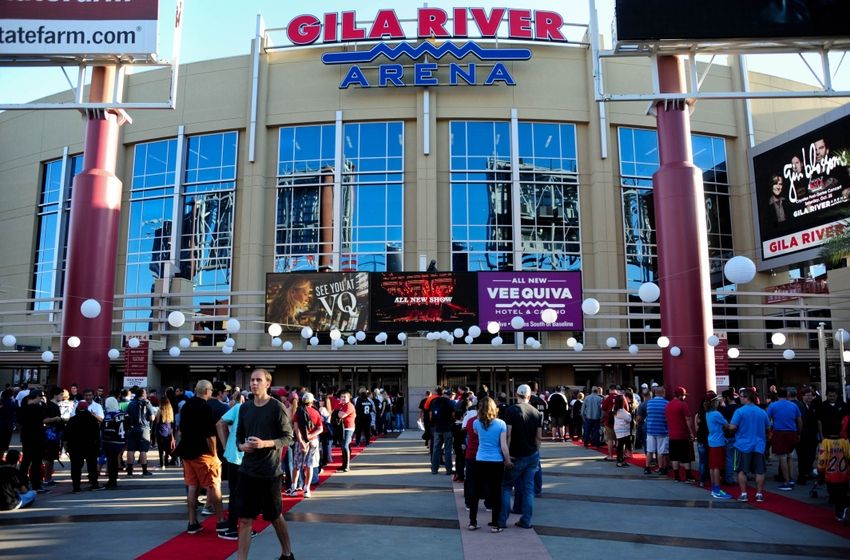 Gila River Arena (originally Glendale Arena and formerly Jobing.com Arena) is a sports and entertainment arena in Glendale, Arizona. It is located about 12.5 miles (20.1 km) northwest of downtown Phoenix.

The Arizona Coyotes of the National Hockey League (NHL) has been the primary tenant since the building opened on December 26, 2003. It sits on the north side of West Maryland Avenue across from University of Phoenix Stadium, home of the National Football League’s (NFL) Arizona Cardinals. The venue anchors the City of Glendale’s Westgate Entertainment District just east of Arizona Loop 101.

Completed at a construction cost of US$220 million, it seats 17,125 for hockey and lacrosse, 18,300 for basketball and about 19,000 for concert events. The arena has 3,075 club seats and 87 luxury suites (including two Luxury Tower Suites). It also features a completely integrated video, scoring and advertising system from Daktronics.