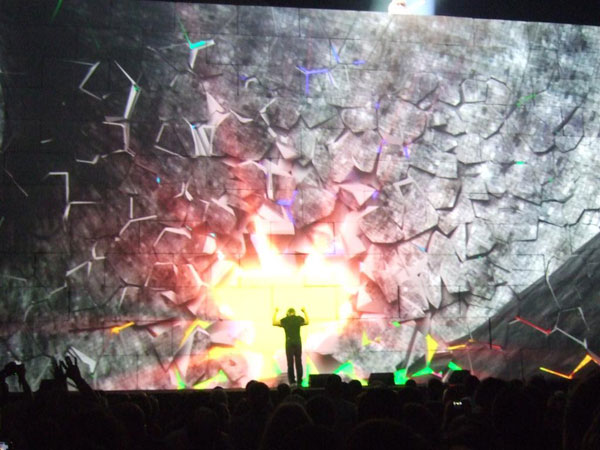 Its getting kinda hard to review the gigs now due to their not been much new for the last few shows and the performances all being fantastic with very few if any mistakes! tonight’s show was no different, the first half was flawless and the second half was just as good as ever! There was one difference tonight though, the crowd! unlike last night where the crowd were up and down all night and couldn’t decide whether to sit or stand tonight’s crowd were up on their feet and didn’t sit till the end of the show!

Roger wasn’t in as good a mood as he was last night but he was in good humour, his actions during the second IN The Flesh were great, pointing to the crowd telling them to sit down at the sides and using his hand as a gun at the crowd shooting at them then pointing to them and dragging his hand across his throat

The wall fall at the end was good, better than last night for sure. It still amazes me to look round at the crowd during and after the walls falling and seeing the reactions on their faces, its always too ark to take pictures of people but I’m gonna try real hard the last few shows to capture their faces with a couple of pictures. 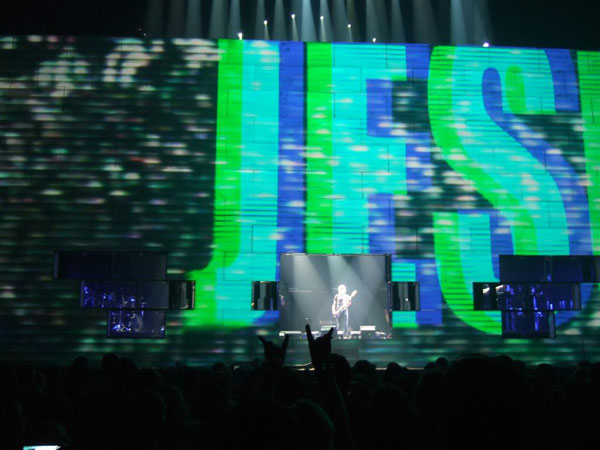 The two shows in San Jose definitely rank up near the top as the best I’ve seen so far, and I suppose alot of that can be attributed to the great city and vibe that San Jose has to offer, along with all the great people I was able to hang out with. Great art museum, beautiful cathedral, historic downtown area, dozens of great restaurants and bars, and the weather itself was fantastic for the first two days up there (although it did rain a bit on the third day). Prior to getting to San Jose, I did a google map search of the area and located a British pub called the Britannia Arms half way between the hotel and the arena. Knowing there were a couple of people in our group from England I thought it would be the perfect place for a meet-up, and after discussing our options, everyone agreed that Britannia was the place. Great pints, great food, and great fun…and even great Pina Colada’s! For those few hours at the pub before and after the two shows, it became clear that Britannia (the pub) indeed ruled the world again!

Started the morning of the first show with a full traditional English breakfast at the Britannia, and then had some time for the art museum, cathedral, etc. in preparation for the nights show. I had a great side view loge seat about 20 seats from the Wall and 8 rows up on the left side, and it was a new perspective that allowed me to see and things differently as well as experience certain elements that I hadn’t seen or noticed before, but then again that’s been the case for every show I’ve seen…there’s always something different to see. Being within a stones throw from the the hotel room scene during Nobody Home was very cool, it was as if I was in the same hotel room as Roger with 13 channels of shit on the tv to choose from. And I had a perfect view of the giant spiral wave during Comfortably Numb. As it was spiraling out of control, I couldn’t take my eyes off of it and I felt as if I was starting to get sucked into the Wall itself. Maybe it was the pre-show pints of Boddingtons, or perhaps the little bit of weed I’d smoked (or probably a combination of both)…but it was all quite hallucinatory and seriously sensory overload. And as I’ve mentioned in the past, Don’t Leave Me Now was very moving. Looking across the entire Wall to see the ‘babe’ on the other side with tears and paint dripping from her eyes and mouth was powerful. The wife puppet is always interesting to look at, but it’s the vision of the woman herself literally melting away under a cascade of green goo that hits me the most, and it’s hard to take my eyes off of her.

Night two was another phenomenal show, and I was seated 2nd row floor on the left side. As luck would have it, I was scouring ticketmaster in the weeks leading up to the show looking for mid-range priced seats, but when I saw this single eventually pop up I had to go for it. This was the closest I’ve ever been to the Wall itself, and it was a truly eye-opening and jaw-dropping experience. While some of the imagery on the Wall was hard to completely focus on and take in, and it was impossible to see the whole Wall in it’s entirety, being that close definitely has alot of positives. Seeing facial expressions of Roger and the band members, and also witnessing firsthand all of the nuts and bolts that drive the show itself, was all very cool. Being that this was December 8th – the 30th anniversary of the death of John Lennon, Roger had a moment of silence in John’s memory which was very appropriate and moving…rest In peace John. Again, Don’t Leave Me Now was dark and ominous, but this time by standing directly in front of the wife puppet it was hard to take my eyes off of her while still watching the nasty green goo covering the Wall. And if I thought I was close to the hotel room on night one, I was even closer on this night…an excellent perspective. The spiral wave situation on the Wall during Comfortably Numb was again mind-boggling, and being directly in front of the barrel of the “wave” where Roger comes over to stand on the platform was quite disorienting. During The Show Must Go On, In The Flesh, Run Like Hell, and Waiting For The Worms, you can really appreciate the theatrics that are going into this performance, and it has all become a well-oiled machine at this point with everyone onstage becoming as dark and nasty as the lyrics and songs themselves indicate. While all a bit campy and over-the-top, it’s still dark and disturbing and very thought provoking. Musically speaking, it was an excellent performance for the entire show as usual, and while DaveK nails every solo with perfection every time, and GE Smith is an absolute wizard without hardly any faults on guitar and bass, it is Snowy White who has always been and will always will be my favorite. There seems to be more heart and soul in his playing rather than just duplicating every solo he plays with absolute precision, and while that’s not knocking DaveK and GESmith, it’s nice to hear some fluid guitar playing from Snowy with a few warts and all. With that said, kudos to all of them and everyone else onstage for putting on excellent performances. 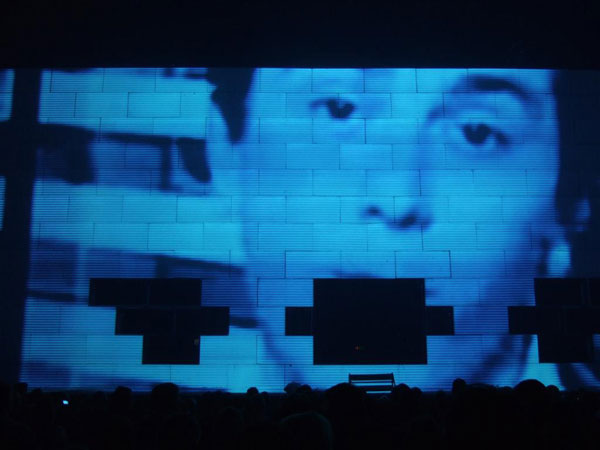 Special thanks to Matt, Maria, Simon, Kami, Gail, Joe, Brian, and others for making this part of the journey quite a memorable experience. All of you- along with everyone else I have met on this tour- have become family to me…brothers and sisters sharing in all of the excitement that this tour has provided for us. I now have a couple of days at home to recuperate and contemplate (and pay bills!), and then head back down to Anaheim for the grand finale two shows of the US leg. Looking forward to seeing old friends and meeting new ones, and experiencing the greatest show on Earth. It’s been an incredible journey and a hell of a ride, and one that will stay with me forever. I’m really grateful and appreciative that I’ve been able to experience it all, and must thank Roger for putting in all the time and effort for making this Wall tour happen. And aside from the fact that this is a Roger solo tour version of the Wall vs. the original Pink Floyd version, I don’t see how it could possibly be any better. And so it goes, the show must go on…I’ll be writing some final thoughts and impressions after the Anaheim shows to conclude my experiences of the US leg of the tour, and until we meet again, cheers to everyone! Stay tuned… 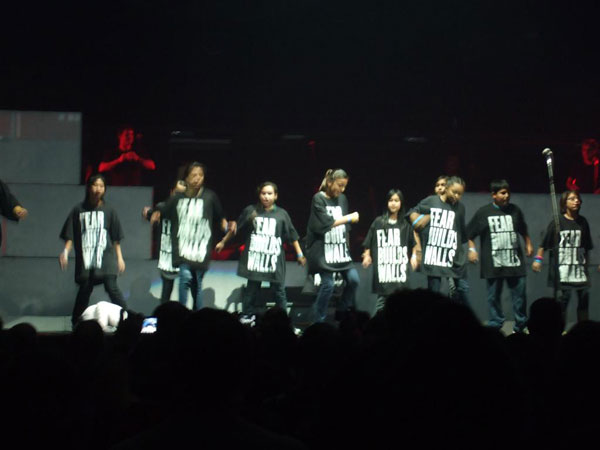 Saw the second night’s show from row 2 and I have to say… seeing this show that close was a whole new experience. As the date was 8 December it was the 30th anniversary of John Lennon’s death. Roger paid a nice tribute… and so too did the crowd. When The Wall came down it looked like it was aiming right for us! What a great night. Dave Kilminster raised a few notches higher for me; the guy is a monster guitar player! So is G.E. Smith. Also… I really love Graham Broad and his attack on the drums. The guy is a wonderful talent and I’m happy that he’s been Roger’s drummer every time I’ve seen him, dating back to 1987.

Was sorry I didn’t run into an Fleeting Glimpser’s but all in all, this was worth every penny and the travel. Now I am debating a trip to London…

Review thanks to Echoes71