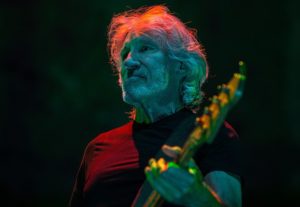 Here’s the not-so-subtle secret to Pink Floyd’s success and perennial popularity: By merging the grandiosity of progressive rock with the everyday concerns of the working man and the dorm-room philosopher, the unlikely English quartet struck a chord with just about anyone with a semblance of compassion or intellectual curiosity. If Floyd songwriter Roger Waters’ Thursday show at the AmericanAirlines Arena was any indication, the band’s reputation is not only intact but also thriving in these turbulent times.

There was some controversy. Children from the T.A.L.L. (Teens Are Lifelong Learners) program who had been slated to join the singer-songwriter onstage for “Another Brick in the Wall Parts 2 and 3” were pulled at the last minute. According to the Miami Herald , the group declined to participate because of concerns about Waters’ purported anti-Semitism. Waters, a Palestinian advocate, has long attracted such charges for his comments on Israel and Prime Minister Benjamin Netanyahu.

Attendees would have been none the wiser were it not for the artist’s own comments on the matter; “Another Brick in the Wall Parts 2 and 3,” which closed out the first half of the show, was pulled off without a flub. The kids onstage shed orange jumpsuits to reveal black tees with the word “Resist” printed on them. Both onstage and in an interview recorded before the show, Waters alleged the city had pressured T.A.L.L. to drop out of the show. (The City of Miami funds the group.)

In light of the outcry by the likes of the Greater Miami Jewish Federation around the show, the pullout seems plausible enough. But regardless of who made what choices on the issue, the fact remains that Miami children were deprived of participating in a show that captivated the eyes and ears of 20,000 eager locals.

And what a show it was: Performing a set list consisting of hits and cuts from Pink Floyd’s most popular material — the five-album streak from Meddle through The Wall — along with songs from his new solo record, Is This the Life We Really Want?, Waters and his band offered a spectacle that allowed the audience to lose itself. Kicking things off with “Speak to Me/Breathe” off The Dark Side of the Moon, the first half of Waters’ set kept it accessible, with well-known fan favorites such as “Time” and “Wish You Were Here” being played to rapturous reception.

For as great as Waters’ first set was, it was ultimately the second half of the show that proved revelatory. Ratcheting up the intensity of both the music and the accompanying visuals, the band returned after an intermission to an electrifying performance of “Dogs,” the 17-minute centerpiece of Pink Floyd’s 1977 album, Animals. With screens depicting the iconic BatterSea Power Station, chimneys billowing smoke, and an onstage champagne toast to decadence and capitalistic gain, the nearly 20-minute routine had all the makings of a show-stopper. That was until the band followed it up with “Pigs (Three Different Ones).”

Even with the knowledge that Waters would use the song as an opportunity to criticize Donald Trump, the audience was likely unprepared for the sheer vehemence and venom on display. To the loudest cheers of the night, Waters spared no expense in not only mocking the purported leader of the free world, but also underlining the horror of our current situation. Attention-grabbing, garish visuals depicted Trump holding dildos and driving Fisher-Price cars. And the most affecting moment came toward the song’s end, when Trump quotes, rendered in a stark white, were projected against a plain black background. Gems such as “I’ve said if Ivanka weren’t my daughter, perhaps I’d be dating her” were displayed alongside stunning examples of ignorance, such as “Why was there the Civil War? Why could that one not have been worked out?”

However, Waters understands the value of ending on a triumphant note instead of a dispiriting one, so he ended the show with Dark Side of the Moon closer “Brain Damage/Eclipse” before segueing into cuts from The Wall and ultimately its standout track, “Comfortably Numb.”

It was a night composed equally of anger and catharsis, all delivered through some of the most beloved songs of the past 40 years. It’s just a shame that some of Miami’s brightest and most promising weren’t along to enjoy it.

The AmericanAirlines Arena is a sports and entertainment arena located in Downtown Miami, Florida along Biscayne Bay. It was constructed beginning in 1998 as a replacement for the Miami Arena and was designed by the architecture firms Arquitectonica and 360 Architecture. The Arena is home to the Miami Heat of the National Basketball Association.

The AmericanAirlines Arena is directly served by the Miami Metrorail at Government Center station via free transfers to Metromover Omni Loop, providing direct service to Freedom Tower and Park West stations. The Arena is also within walking distance from the Historic Overtown/Lyric Theatre Metrorail station.

The AmericanAirlines Arena has 2,105 club seats, 80 luxury suites, and 76 private boxes. The Waterfront Theater is Florida’s largest theater which is housed within the arena, that can seat between 3,000 and 5,800. The theater can be configured for concerts, family events, musical theatre and other stage shows. American Airlines which has a hub at Miami International Airport maintains the AmericanAirlines Arena Travel Center at the venue.