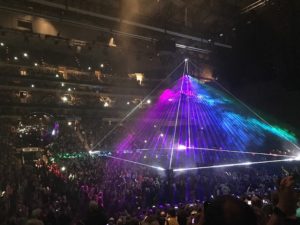 At 73, Roger Waters is one of the last classic rock icons still touring and recording new music, and on Monday night, the Pink Floyd bassist and eventual frontman brought his Us & Them tour to the American Airlines Center.

Unlike his contemporaries, Waters hasn’t adopted a cuddly, nostalgic persona as he’s aged. He played all the hits from his impressive body of work, but he also devoted much of the show to politics. Those who haven’t paid close attention to Waters or his political leanings may have come away with more than they bargained for.

The imagery Waters chose was not subtle. Inflatable pigs circled the arena as he and his band worked their way through “Pigs (Three Different Ones),” broadcasting anti-banking messages while images of President Trump in various comprising positions flashed across the screens.

Speaking of which, the show’s design was quite a spectacle. It featured an enormous projection screen onstage behind the band and a 10-paneled string of screens that dropped from the rafters right down into the middle of the floor seating.

During “Another Brick in the Wall,” a group of 10 schoolchildren dressed in orange prison jumpsuits danced with infectious glee before tearing open the suits to reveal black T-shirts emblazoned with the word “Resist.”

Later, during “Money,” various images representing corporate and government corruption filled the screens as coins and dollar bills piled up.

Waters’ father died in WWII when the singer was only 5 months old. He has been a longtime critic of the military-industrial complex, as well as a staunch supporter of the rights of veterans.

His newer material, like the authoritative “Picture That” and ethereal “Déjà Vu,” depicted war as an emotional struggle as well as a physical one. During the songs, grainy footage of drones dropping bombs on unsuspecting moving targets were interspersed with families fleeing a ruined village.

As more disturbing images proceeded across the screens — impoverished cities, a homeless mother and stacks of guns — we started to wonder if we might be able to find some antidepressants alongside the shirts, hats and posters at the merchandise tables.

But in the end, it wasn’t all doom and gloom. The show’s design made for some truly transcendent moments.
It was easy at times to zone out and admire the beauty, which was enhanced by a floating orb equipped with cameras that broadcast audience pictures in real time.

Later, a replica of the Power Station from the cover of Pink Floyd’s Animals appeared, and a hi-tech pyramid of lasers tented the stage and the front floor area in a scene reminiscent of the cover of Dark Side of the Moon.

Waters’ nine-piece band contributed to the beauty and grace of the evening’s performance. It was a surprisingly youthful and hip lineup. Southern Californian Jonathan Wilson (“the band’s resident hippie,” as Waters introduced him) had rhythm guitar and vocal harmony duties. Joey Waronker was on drums, and Jess Wolfe and Holly Laessig of the band Lucius brought the crowd to their feet several times with show-stopping harmonies.

Given Pink Floyd’s supremacy in the classic rock genre, the diversity of the crowd was unsurprising. During the three-hour show, which was wisely broken up into two acts with a 20-minute intermission, there were gray-haired fans wearing vintage Pink Floyd tees and boasting of shows long ago, as well as twenty-somethings singing to “Dark Side of the Moon” and proclaiming their excitement at hearing it performed live for the first time.

After the show, some folks were grumbling that they wished Waters hadn’t gotten “so damn political.” But, fortunately, as the masses filed their way through the concourses to the exits, there was no partisan jousting.

Waters’ music is powerful, timeless and universal. His final number was a rousing version of “Comfortably Numb,” and the chorus of voices singing along nearly drowned out the band. 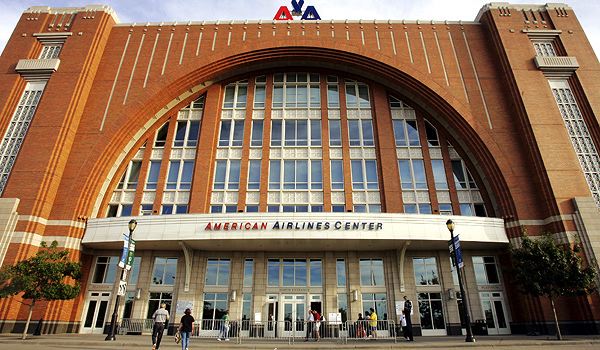 The American Airlines Center (AAC) is a multi-purpose arena, located in the Victory Park neighborhood, near downtown Dallas, Texas.

The venue serves as the home to the Dallas Mavericks of the National Basketball Association, and the Dallas Stars of the National Hockey League. The arena is also used for concerts and other live entertainment. It opened in 2001 at a cost of $420 million.

American Airlines Center was designed to be the heart of a new urban, commercial area designed to reinvigorate the city of Dallas called Victory Park. The facility itself features a conservative, traditional design with sweeping brick façades and smooth arches, and has been graced with a number of awards (below). The interior includes retractable seating, public art and a state-of-the-art technological arena. Because of the Quonset hut-like appearance of its roof and the fact that American Airlines holds the naming rights some fans have come to refer to it as “The Hangar”.