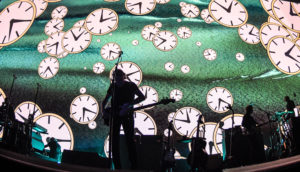 Roger Waters and the 2017 “Us & Them” tour over took the KeyBank Center on Saturday night bringing amazement and controversy.  It was a full house as Waters and his full band filled the stage.  As normal on his tours, the Pink Floyd alumni tipped the scales with an amazing production of light and sound.

Covering songs from “The Dark Side of the Moon”, “The Wall”, “Wish You Were Here” and more, the band quickly immersed the crowd back to the power house days of Pink Floyd.  Selects from Waters’ latest solo effort, a concept album whose title asks “Is This the Life We Really Want?” also filled in.

The first set remained mostly without political commentary, I did miss “Picture This” from the latest album while moving up to my seat from the photo pit, which I understand may have included some anti Trump images. Then, as in the past “Wall” tours, they welcomed a group of local school kids out to the stage during “The Happiest Days of Our Lives” and “Another Brick in the Wall Parts 2 & 3” The word “Resist” appeared large on the rear screen and the kids shirts after they ripped off the orange jump suits they wore onto the stage.

The second set took the production to another level as massive projection screens lowered from the ceiling and the Battersea Power Station pictured on the cover of Pink Floyd’s “Animals” appeared above the crowd, its smokestacks pumping as it stretched the length of the KBC floor. 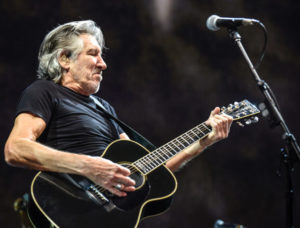 During “Pigs (Three Different Ones)” Mr. Waters really let the crowd know of his political feeling about the current President and his administration as very disparaging images of President Trump along with quotes were projected through the venue.

While I shy away from voicing my political views I could easily see how you could be very upset by this if you supported the Trump administration.  I chose to close my eyes and listen to the music for most of it.  I had friends, huge Pink Floyd fans, who chose not to attend the show based on those images and views.  While Waters never vocalized them himself it was very obvious where he stands.

During the final 2 songs “Brain Damage / Eclipse” the final piece of production showed itself with a laser generated pyramid over the crowd depicting the cover of their album “The Dark Side of the Moon”  This was truly a concert highlight.  The show ended with confetti being blown out and dropped from the ceiling with the word “Resist!” on it leaving the KBC clean up crew quite a task.

KeyBank Center, formerly known as Marine Midland Arena, HSBC Arena and First Niagara Center, is a multipurpose indoor arena located in downtown Buffalo, New York. It is the largest indoor arena in Western New York, seating 19,070 fans in its normal configuration, and was constructed primarily for the Buffalo Sabres of the National Hockey League (NHL), who have called the arena home since 1996, when it replaced the now-demolished Memorial Auditorium. The arena was renamed as KeyBank Center starting with the 2016–2017 NHL season.
It is owned by Erie County and operated by Pegula Sports and Entertainment (as Hockey Western New York, LLC).