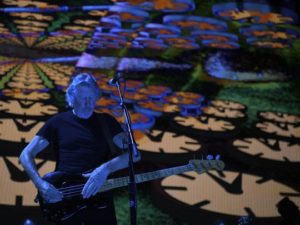 When they performed the Pink Floyd hit “Another Brick in the Wall” at the Prudential Center in Newark on Thursday night, Roger Waters and his band were joined by 10 children in prison jumpsuits. The children stood still at first, then sang and danced joyfully as the song’s message turned rebellious. At one point, they took off their jumpsuits to reveal T-shirts saying “Resist.”

That was just one of several swipes at the current U.S. president that Waters, 74, the main creative force behind Pink Floyd, took in the first of five area shows. (He also has two-night stands coming up at the Barclays Center in Brooklyn and the Nassau Coliseum on Long Island.) When he sang the line “Big man, pig man/Ha, ha, charade you are,” in “Pigs (Three Different Ones),” the word “charade” was superimposed over a photo of President Trump on the video screens. Later, he showed humiliating renderings of Trump naked and Trump as a baby, and flashed ridiculous things that Trump has said (e.g., “The beauty of me is that I’m very rich”) on the screens.

He continued with more videos of Trump and Vladimir Putin during “Money,” and videos of anti-Trump protesters during “Us and Them.” “Please help, we are trapped in a dystopian nightmare,” read a screen message during “Dogs.”

Waters’ tour, which began in May and is currently scheduled to end in February, is titled the Us + Them Tour. But even though it left no doubt who Waters considers the “Them” to be, the show  was not entirely political, featuring many of Pink Floyd’s signature songs (including “Wish You Were Here,” “Time,” “Welcome to the Machine” and a show-closing “Comfortably Numb”) in addition to four songs from Waters’ recent solo album, “Is This the Life We Really Want?”

In keeping with Pink Floyd tradition, there were some ambitious visuals as well, with movable screens hovering over the arena floor for most of the second half of the show; a laser reproduction of the “Dark Side of the Moon” album cover during “Brain Damage”/”Eclipse”; and a giant, flying pig during “Pigs (Three Different Ones).” At one point during “Dogs,” which preceded “Pigs,” Waters and some of his bandmates donned pig masks and sipped champagne together. 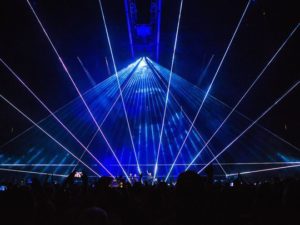 The songs from “Is this the Life We Really Want?” were notably more lyric-focused and less musically complex than the Pink Floyd material, which Waters reproduced with an absolutely first-rate nine-piece backing band, including singer-guitarist Jonathan Wilson (who handled the vocal parts created by Pink Floyd’s David Gilmour) and guitarist Dave Kilminster (who took the guitar solos originally played by Gilmour). Jess Wolfe and Holly Laessig, both of the Brooklyn-based band Lucius, occasionally helped on lead vocals as well, in addition to singing backing vocals and playing percussion.

Especially on the opening sequence of “Breathe,” “One of These Days,” “Time,” “Breathe (Reprise),” “The Great Gig in the Sky” and “Welcome to the Machine,” Waters and the band pulled off the rare feat of playing very sophisticated music in a raw, viscerally compelling way.

Waters, who has sometimes come across as dour and angry in the past, smiled often throughout the evening, and even encouraged audience members to do “the wave” during “Comfortably Numb.” He also got emotional, with his voice shaking a bit as he thanked the crowd before the encores for its response to his music, as well as his message.

“We can turn this ship around,” he said. “The sooner the better.” 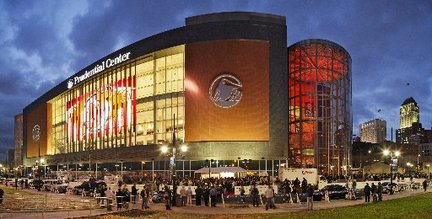 Prudential Center is a multi-purpose indoor arena in the central business district of Newark, New Jersey, United States. It was designed by HOK Sport (now Populous), with the exterior designed by Morris Adjmi Architects. Opened in 2007, it is the home of the New Jersey Devils of the National Hockey League (NHL) and the Seton Hall Pirates men’s basketball team from Seton Hall University. The arena seats 16,514 patrons for hockey and 18,711 for basketball. Fans and sports writers have affectionately nicknamed the arena “The Rock” in reference to the Rock of Gibraltar, the corporate logo of Prudential Financial, a financial institution that owns the naming rights to the arena and is headquartered within walking distance of it. In December 2013, the arena ranked third nationally and ninth internationally for self-reported annual revenue.