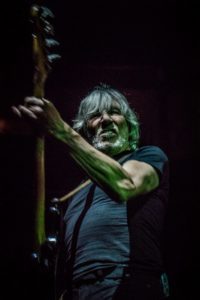 The performance—part of Waters’ “Us + Them Tour”—was divided into two distinct sets, with the first featuring the majority of the night’s selections from his 2017 solo release, Is This The Life We Really Want? Pink Floyd’s 1973 masterpiece The Dark Side of the Moon was well-represented during the show’s opening stanza, which found Waters’ and his band working through “Speak to Me,” “Breathe,” “Time” and “The Great Gig in the Sky.”

Speaking of the touring band, the nine artists backing Waters’ were undoubtedly up to the task of bringing Pink Floyd’s catalog to life. Jess Wolfe and Holly Lessig—of the indie rock outfit Lucius—shined particularly bright when reinterpreting the introspective wails of “The Great Gig in the Sky” in a manner that, while different from the original version, captured the mortal salience that is the essence of the song. Laurel Canyon folk rocker Jonathan Wilson also did a great job of holding down David Gilmour’s vocal parts, while Joey Waronker’s effortless drum work came through brilliantly on the crisp surround-sound system.

After wrapping up a four-song run of obligatory solo material, Waters and co. offer up a poignant “Wish You Were Here” before closing out the night’s first half with an “Another Brick in the Wall” show-stopper. The number took on a special intensity when children from New Orleans’ Dancing Ground studio joined the band on stage for a coordinated dance. At first the kids were clad in orange jumpsuits, but the prison garb was eventually ripped off to reveal the “RESIST” shirts they were wearing underneath.

The end of the first set marked the beginning of the night’s political theatrics, which only became more prominent during the second half of the show. In fact, the theatrics became more prominent all around. The night’s first set found Waters backed by a impressive LCD display and all of the psychedelic imagery that went with it, but things were taken to the next level when the band returned to the stage. That’s when a series of shape-shifting projection screens descended from the arena’s ceiling, effectively cutting the venue in half. When the band came out the gate with the Animals selection “Dogs,” the screens took the shape of London’s iconic Battersea Power Stations, which famously appears on the cover of the 1977 album.

With the nearly 20-minute behemoth that is “Dogs” out of the way, the show’s visuals took a decidedly political turn with the onset of another Animals number, “Pigs (Three Different Ones).” Originally recorded 40 years ago, the song was reimagined as an anti-Trump anthem. The president’s face was emblazoned on the side of massive, remote-controlled pig that flew over the audience while the numerous screens displayed his photograph above the word “Charade” every time the band sang “Big man, pig man / Ha, ha, charade you are.”

And that was just the beginning. The visual insults continued throughout the song, and included Trump’s face superimposed over a pig, Trump’s face superimposed over a baby that was being cradled by Vladimir Putin, and an image of a poorly-endowed romanesque statue of Trump. At one point, a litany of the president’s most controversial quotes were projected in rapid succession. Finally, all subtlety was thrown out the window when the words “Trump Is A Pig” appeared at the end of the tune. The rendition of “Money” that followed wasn’t quite as in-your-face, though it still came with plenty of visual references to Trump, as well as other figures like Putin and Attorney General Jeff Sessions.

Pink Floyd’s music—especially the stuff found on albums like The Wall and Animals—has always been overtly political, and Waters has never shied away from making his own views known. That’s why it was a bit surprising to see some of the reactions in the crowd during the anti-Trump pageantry of “Pigs (Three Different Ones)” and “Money.” A few people could be seen walking out in anger during these tunes, and some even took the time to boo, flip the bird or shout profanities toward the stage on their way out the door (a few more stuck around after lobbing their boos). One must presume that these people were unfamiliar with the nature of Waters’ recent tours or the lyrical content of Pink Floyd’s music, as it’s difficult to imagine why they would be so shocked by his brazen politics otherwise.

In any case, politics stayed at the forefront during “Us and Them,” albeit with much less of a focus on Trump. The gorgeous Dark Side of the Moon composition stuck with the universal anti-war message that has always been embedded in its lyrics, coupling the music with images of child victims of American drone bombings, protesters facing off with police, and the border wall between Israel and the Palestinian territories, among other things. Musically, the song was as solemnly beautiful as ever, and featured plenty of heavy-lifting from saxophonist Ian Ritchie.

“Us and Them” was followed by one more solo tune before the band dove into the bombastic Dark Side of the Moon finale of “Brain Damage”/“Eclipse,” and politics fell to the wayside as the album’s own imagery took center stage. A pyramid of light rose up over the audience, and a multicolored array of lasers was projected through the pyramid to create a massive, 3D rendering of the the album’s classic cover art. If any boos were shouted during this number, they were drowned out by the oohs and ahhs that emanated from every part of the arena.

As the crowd settled down from the high of “Brain Damage”/“Eclipse,” the band shifted gears into another, more subdued pairing. The group’s rendition of The Wall two-piece “Vera” / “Bring the Boys Back Home” made for a briefer foray into Waters’ anti-war mindset before ultimately giving away to the “Comfortably Numb” that closed things out. The stage was awash in psychedelia as the rock classic triumphantly flowed from one guitar peak to the next, making for a truly grand finale to Waters’ first New Orleans performance since Pink Floyd and the Allman Brothers Band played The Warehouse in 1970. 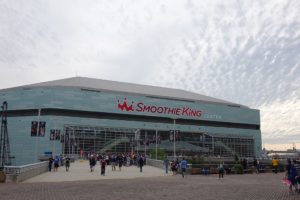 The Smoothie King Center is a multi-purpose indoor arena in New Orleans, Louisiana. It is located in the city’s Central Business District, adjacent to the Mercedes-Benz Superdome. The arena opened in 1999 as New Orleans Arena and has been home to the New Orleans Pelicans of the National Basketball Association (NBA) since 2002. The New Orleans VooDoo of the Arena Football League played their home games in the arena from 2004 until the team disbanded in 2008. The VooDoo resumed play at the arena in March 2011, until after the 2015 AFL season when the franchise folded