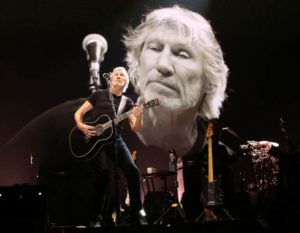 Much about Roger Waters’ “Us + Them” show is a slow-build.

The first two songs of his show at Infinite Energy Arena in Duluth on Sunday focused on the gargantuan video screen spread behind the airy stage as Waters and his taut six-piece band unspooled Pink Floyd’s “Breathe” and “One of These Days.”

The bassist – shaggy-haired and craggily handsome at 73 – grinned as he strode to each side of the stage to acknowledge the sold-out crowd, but it wasn’t until the somersaulting clocks on the screen indicated “Time” was on the way that Waters stepped to the mic, extracting a roar as he uttered its opening verses.

His songs – both with Floyd and solo – are best experienced with headphones, but he turns them into a visceral live experience with his audiophile tendencies (surround sound speakers dotted the arena) and arresting visuals. Even the blonde-bobbed singing duo Lucius (Jess Wolfe and Holly Laessig) were as striking to watch as to hear during “The Great Gig in the Sky.”

Throughout the two-set, more than 2 ½-hour (including a 20-minute intermission) concert, Waters conjured his expected optical magic.

Under a cascade of blue lights, he swapped his bass for a Fender guitar and hit a few well-placed chords on “Welcome to the Machine” as animated rats and hollow-eyed skulls skittered behind him and the crowd, barely prompted, threw their fists forward to chant.

Among the quartet of songs from his new album, “Is This the Life We Really Want?,” was the stark “The Last Refugee,” which featured video of a homeless woman dancing in a warehouse as she imagines herself in an alternate reality and as a child on a beach. For “Picture That,” Waters abandoned an instrument and stalked the stage to better emphasize his incisive lyrics as they reverberated off the nudging beat.

But it felt as if Waters was deliberately lulling the audience with the layered musicality of many Pink Floyd songs – which allowed guitarist Jonathan Wilson to provide his angelic vocals as a lead singer, as well as a brilliant harmonizer with fellow guitarist Dave Kilminster – until the always-searing “Another Brick in the Wall.”

The two parts of the classic rock staple were delivered with musical crispness and bite. Waters seemed to revel in the presence of the kids from Atlanta’s Destined for Greatness Outreach Youth Center who reliably grooved and sang in their orange jumpsuits that gave way to black T-shirts bearing the word, “Resist.”

The phrase lingered on the video screen heading into intermission, and Waters’ second set heightened the tempo, the visuals and the political expression that has been part of his oeuvre for as long as he’s been making music.

A stunning projection screen lowered from the ceiling and ran the length of the arena floor, with smoke stacks depicting England’s Battersea Power Station the initial backdrop as Wilson offered lean vocals on “Dogs” while Kilminster uncorked another stinging guitar solo.

The musical complement to the “Animals” portion, “Pigs (Three Different Ones)” featured the band donning pig masks for a table sit-down that mirrored a surreal scene in “Eyes Wide Shut” before the song kicked in with Waters’ unfiltered rebuke of Donald Trump.

The crowd mostly cheered (a few boos were heard) as images depicting a grimacing Trump on a baby’s body and as a tiny toy for Vladimir Putin to command lit up the massive screens. Words including “charade” and “joker” flashed as that regular co-star at any Waters show, the giant inflatable pig – stamped with “Piggy Bank of War” – took an aerial tour of the arena.

As “Pigs” blurred into the clanging sounds of “Money,” some of Trump’s most notorious quotes (“If Ivanka weren’t my daughter, perhaps I’d be dating her,” “The beauty of me is that I’m very rich”) were blasted in black and white lettering.

The bluesy swing of the song, which included shots of Trump Tower juxtaposed with images of homeless kids sleeping in the streets, was accented with a bright sax solo by Ian Ritchie and a growling vocal from Waters.

The Floyd favorites “Us and Them” and “Brain Damage” were sonically flawless, and the latter ended with a spectacular sight – shards of lasers morphing into a pyramid and jumble of colors to re-create the “Dark Side of the Moon” cover.

Waters didn’t speak much throughout the show, but after “Brain Damage,” he repeatedly patted his heart and repeated “Wow,” at the sounds of his enthusiastic fans.

Not everyone might agree with Waters, but his creativity in crafting a memorable presentation rooted in theatricality is unsurpassed. 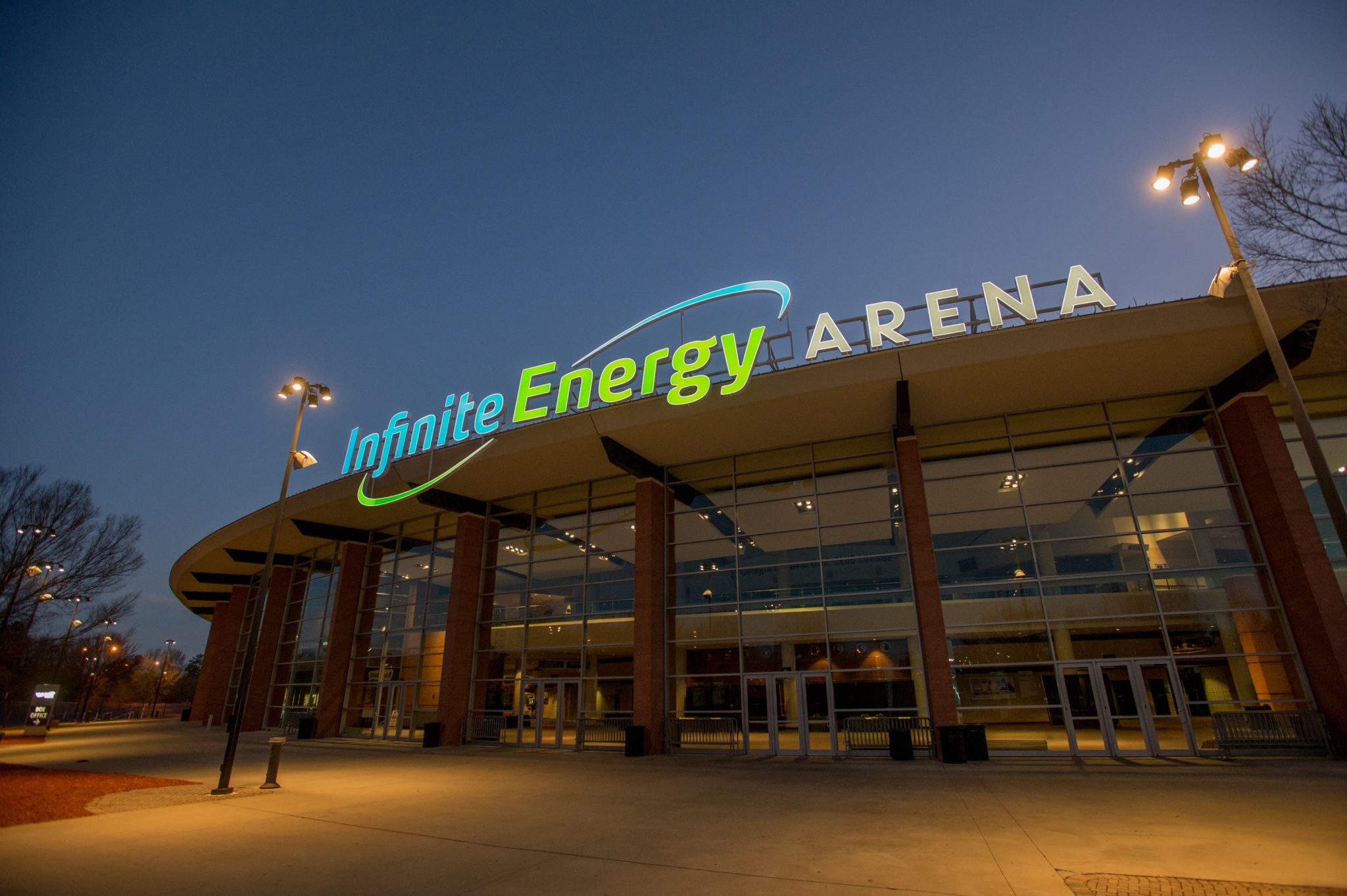 Infinite Energy Arena (formerly The Arena at Gwinnett Center, Gwinnett Civic Center Arena and commonly known as the Gwinnett Arena) is an indoor arena outside the city limits of Duluth, Georgia, within the Atlanta metropolitan area. The arena was an expansion to the Gwinnett Center, which also includes a performing arts center and a convention center. It is the home of the Atlanta Gladiators, an ice hockey team in the ECHL, and the Georgia Swarm, a professional box lacrosse team in the National Lacrosse League.