The show was great tonight, the band were tight, the sound was good, and the atmosphere was just how it should be. The crowd were up and down a touch early on but stood mainly for most of the show which I was glad about.

Dave’s Comfy Numb solo just doesn’t falter now night after night, it’s hard to even pick a single flaw up in the shows from the last couple of weeks even!

The wall fall was pretty good tonight, Kami and I both felt the wave of wind brush past about 5 seconds after it fell, the crowd goes wild when they see the wall falls, I’m pretty sure even though most of the crowd are aware of The Wall’s music not many of them know about the production of the wall and how the wall actually comes down at the shows until it actually happens! It’s always great to watch peoples faces at this point in the show.

We stayed in our seats tonight for Outside The Wall but could still see the facial expressions of the band and were still able to see how much fun they had had and were having by the looks they gave each other. 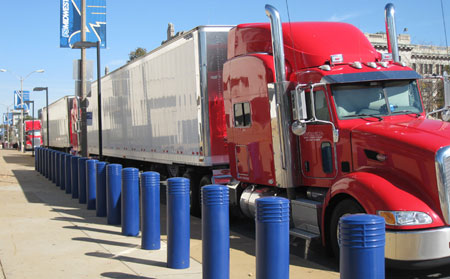 Equipment trucks outside venue with thanks to Will Taber