Thanks to ediskrad73 More Here

I was looking forward to hearing what Bob and Andy though of the show after they had not seen the show since the first three so I was hoping for a great show and it was! On the rail for the first half and dead centre 13th row for the second half really it doesn’t get any better than these positions for the sound and seeing the band up close! The sound was the best I’d heard it at any of the shows, it wasn’t without fault though as there were a couple of times when the projections were out of focus or the wrong thing was projected.

The music was fantastic though I didn’t spot a single mistake music wise. The guitar solo during Comfy Numb was unreal, never heard a solo like it. Kami swears blind it was because Dave was so excited to have met her and he was buzzing from hugging her, it was however a different reason that Dave explained to us is Washington DC!

There was one thing I noticed in Buffalo, I mentioned earlier that the bricks are getting a bit worn and a few marks etc but one brick in particular has what looks like a corner torn off it!! This must have been the brick that Jens sabotaged while he was here in the US!! lol 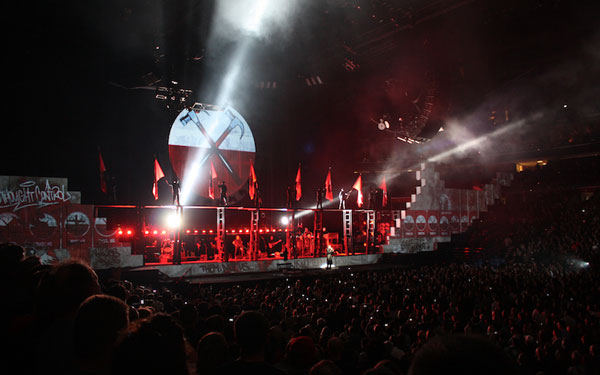