……Even having seen the show twice before I still was completely overwhelmed.

This was my one and only initial fanclub presale success, and at the time I baulked at the $500+ for a pair of best seats, and went for the cheaper option. I don’t think I could have possibly got a better place to sit if I picked it out myself. Absolutely dead center in the front row of the third block back on the floor… the mixing board was four or five rows of seats behind me. The wall completely filled my field of view, sound was astounding, wonderful stereo separation of the front and impressive surround effects. I’m not usually one to fuss much about saving money, but I did feel a little smug knowing that the people three feet in front of me with much less legroom had paid $90 more than I had

Show was amazing as ever – no mistakes that I noticed… kids were great… at the start of his Mother speech Rog mentioned the closing of the Spectrum, asked if the Electric Factory was still open and commented that this was “always a great music town” before relating the story about how him being sick before a Spectrum show and given a shot by a local doctor was the inspiration for C Numb… intermission is shorter now – I actually missed the start of Hey You after a quick smoke, drain and beer refill… piggy flew directly overhead so low that had I stood on my seat I could have touched him and I could feel the wind from his propellors … wall fall seemed particularly impressive

Review thanks to sysyphus

It was a cold and wet night in the city of brotherly love when 20,000 Pink Floyd fans congregated at the Wells Fargo arena. A stones throw from the arena is the old Spectrum. The venue in which Roger, upon feeling ill, was injected with some kind of tranquilizer making him “Comfortably Numb.” He aknowledged this momentous occasion in his opening to “Mother” along with praising the city for being a “music town.” The crowd was awed by Roger’s awesome power to take a rock show and turn it into an emotional experience. Brick by brick fans watched as a wall was built between them and their icon. One woman next to me said during “Hey You” “Are they gonna play like this for the rest of the night?!?” I turned, gave her a smile and replied, “You’ll see.” You can cut the angst with a knife in the room leading up to the chorus of “C Numb” with all in hopes that this would be the “sunny day” in which David and Roger “would meet again” after a slight sigh everyone was blown away by the way Robbie and Dave K. One criticism of the night, “Waiting for the worms” is one of my favorites from the wall and I felt they played it sort of sluggish and melodramatic to what it could have been, luckly “the trial” scene is mind blowing and erased any short term bad tastes from my mouth. After the show the fans filed out with permanant smiles plastered on their faces from the spectacle they had witness. Everyone felt they had seen something special. Everyone from the tour has felt they have seen something special. They have. Our icon, Roger Waters, playing his music for us to enjoy and learn from. Witnessing Roger on this tour shows how he has torn down most of his own personal walls be it with fans or former band members. Roger is in a happy place and he wants all to know 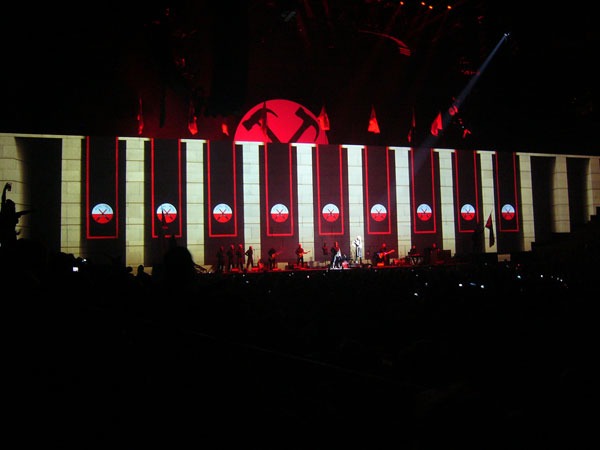 I remember from the Dark Side tour that the shows in Philly always attract a great crowd and tonight was no different. Our seats were 14th row on the aisle in the front section of the floor, Phil and Laila were behind us in row 16, Greg was a touch further back off to the side but still on the floor and our friends Jim and Chrissy were front row right, right in front of Jon and Harry.

As Kami and I were sat waiting for the show we could see Jim on the front row and he was right where Roger takes off his armband after Waiting For The Worms. Kami suggested we let Jim know so we went down to see him and explained where to be and at what time and to be on his guard to try grab the armband when Roger throws it into the crowd.

As soon as the show started I could tell the crowd were gonna be great! They were all standing the second Roger hit the stage and remained stood after In The Flesh and throughout the whole first half.

Roger was really talkative to the crowd tonight, especially before Mother, asking if the Electric Factory venue was still open and letting people know he had heard about The Spectrum closing down. He commented on how he always knew that Philly was always a music town and how the crowd always gave them a great welcome.

Roger has changed the images during Comfy Numb, well not changed them but has added some images to what used to be the pain white screen, I think they look fantastic and the images change as the show goes along. It’s like bricks that all move around and blend into each other as the show goes along! He’s also changed a few images in Mother and Another Brick which I’ll mention in the review for the second show in a day or so.

I would say the show was probably in the top three of the tour so far for definite. After the show we headed down to congratulate Jim on getting the armband, him and Chrissy really enjoyed the show and were so excited to have seen it from the front row and to have caught the armband!

A memorable show last night. Overall a great show, David was a no show, you would feel the sighs after it wasn’t him on the top of the wall. The solo was well played none the less. The sound was good, clear vocals however, in certain songs the sound would be distorted a little. This was not a major problem, and almost expected the first night at a new venue. I’m sure they will iron out any sound issues for the rest of the stay. I gotta say the trial was incredible! The original video/art seem to work best for me at least. It’s no secret Roger is against the war in iraq, the show had took a lot of time focussing on iraqis and their suffering.The thing is I fought in iraq on two deployments and the new spin Roger put on the wall felt a little forced. It was too much I’d say, too many pics of iraqis, too many picks of the confict. Also durring the intermission the entire time, there were pics of fallen veterans from all conflicts since WW1. I get it believe me I do, still it felt like an over kill. To give a good example pics from Abu Ghraib, and captioned video of our gunship taking out iraqi journalists when we mistook cameras for weapons. Maybe its just me, so don’t mind my comments. I guess for me it was something I dealt with on daily basis and not something I wanted to enjoy at a concert. Anyway overall it was a blast, don’t let my complains keep you from seeing the show. Its well worth the money.

Review thanks to chrisman210

A new perspective of ‘the wife’ sent in by George Skroumbelos