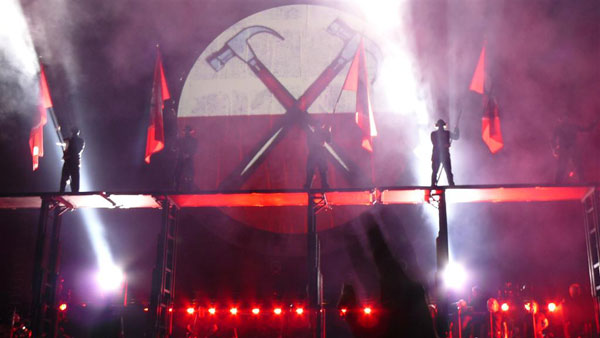 All images thanks to Simon Wimpenny

Sunday November 14th in Ft Lauderdale was my fourth show of this tour (the first two were Nassau Coliseum and third was in St Paul, MN). After buying tickets and making arrangements to attend the last 2 shows in Philadelphia and then not being able to make it I had thought I would not have any more opportunities to see this amazing show again. Then at the last minute work called and needed me in my former hometown of Ft Lauderdale. Sunday afternoon I hooked up with a few old friends from college who had gone to the Saturday night show and were going again. Well they didn’t have to ask me twice.

We had great seats 9 rows up in the closest section to the stage on the right side. This was the first time I didn’t have floor seats and was excited to see the show from a different perspective. There were several changes from the other shows and I noticed the first before the show even started. At the other shows about 10 minutes before they would play clips from various comedians (George Carlin’s 7 words, Sam Kinison, even Cartman from Southpark). Now it was music right up to when the “homeless” guy throws the doll on the stage then “I am Spartacus” and the show begins. I noticed there were several changes in the lighting cues during The Happiest Days and a few other minor tweaks. It also seems like they trimmed some of The Last Few Bricks and Dave’s Solo during CN seemed to happen a little quick as well though I could be wrong. Intermission was also shorter which was a welcome. IMO it was too long before. One very noticeable technical glitch occurred during Don’t Leave Me Now, when the inflatable did not come down properly. It somehow got stuck and did not come down.

All in all another great show with a great crowd. The couple next to us came from France to see the shows and can’t wait to see it next year in Europe.

Review thanks to Thanks to Jon Harmon 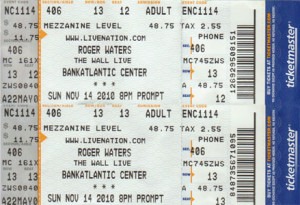