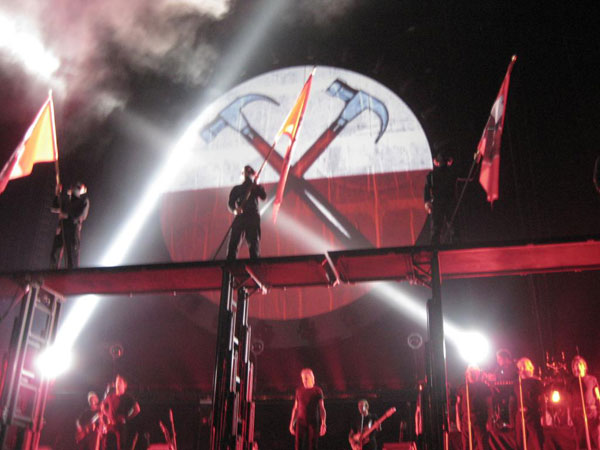 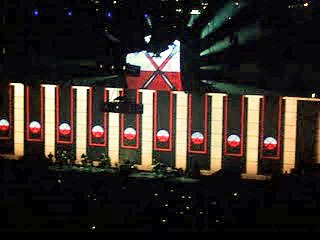 This is a concert I’ve waited all my life to see, and now I have seen it. Of course, its not the full Floyd, it was just Roger. But still, I feel like I saw the whole thing. The whole shebang. A Full performance of my favorite album of all time. Lets begin:

I drove through the traffic jam infested and treacherous skyway of Chicago to arrive downtown at the United Center (otherwise known as BULLS’ STADIUM). To be in the place where Michael Jordan won so many games and took home championships was awesome in itself. I used to be an avid basketball watcher back in the 90’s of the BULLS’ heyday. Only problem, the seats are STEEP! 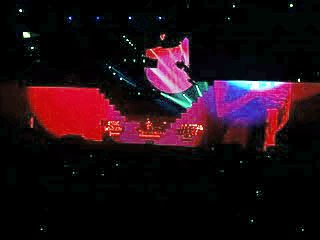 I found my seat in section 307 on the top level and immediately my vertigo set in. There were no guard rails and if I stood up there I would get all dizzy and want to fall over. The seats were damn close together too and considering I am a man of size, it wouldn’t have been good for my poor neighbors. Luckily for me, right next to my section was a bar lounge. The ledge looked out onto the concert floor, giving me the same angle and view I would have had anyway. But-without all the people around me, the people talking through the show and the pot smoking. So I hung out there at the bar. There were people on the ledge with me looking out, including this nice couple whom I chatted with during the show. Man, could they drink! I scored a Sam Adams and waited for the show to start. 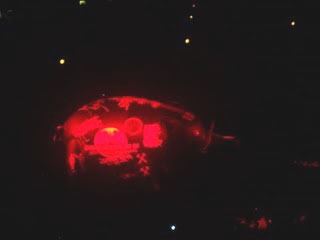 It started off with a bang with fireworks, chanting and explosions galore. And what followed next was what I feel to be, a very faithful (and very modern) re-creation of the 1980-1981 WALL TOUR Pink Floyd put on. Complete with teacher, wife and mother puppets, wall construction, Gerald Scarfe animation, and costumes. The only thing really that has changed was there was no “surrogate band” and there was a TON of updated and modern graphics that were projected onto the Wall itself. Alot of eye candy.

Oh yeah, and the famous PIG made an appearance…

It really is hard to reconstruct the visual feast I was presented with. But all in all, it was a stunning performance. I really noticed no mistakes or miscues on a part of the band or the massive lightshow. Everything seemed to be pretty on. Perhaps the kinks are now worked out on this, the sixth show of the tour. 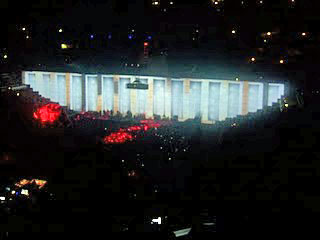 I had bought my ticket back in July/August before we had to move and I had a bit of money. After we found out we have to move come November and how tight everything is as a result, I tried even to see if I could generate some funds by getting my ticket refunded. I could not. So I decided to go anyway and just have fun. and I am soooooo glad it worked out the way it did. It was a wonderful show. Only a few times did I feel the twinge of remorse that it wasn’t the full monty of Floyd on the stage instead of just Roger and his band. But there were some really good musicians with him. Including G.E. Smith from the Sat. Night Live band. Remember that dude? Yeah, he wailed. Snowy White and Jon Carin were in, as well as Harry Waters on organ (yes, Roger’s son). There were some touching moments, such as when Roger sang harmony perfectly with his audio track from 1980, and him walking outside the wall during the solo to comfortably numb, lightly caressing the wall.. his baby. His masterpiece. The thing he’s built. I couldn’t help but think that in that moment. There was also a massive amount of anti-war graphics and feel to the projections. Including a list of lost soldiers and people from 9-11, Iraq War, World War 2 and other various evils from the past 80 years. Some touching videos of soldiers coming home and surprising their kids at school with their arrival. The look on the kids’ faces when they saw that daddy was home was a real tear-jerker. This played on a longer version of “Bring the Boys Back Home.” 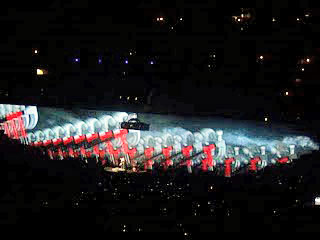 All in all, it was a great show and I am extremely glad I went. It kind of sucked to not have anyone to share the experience with cause I went solo. But really, THE WALL has been MY favorite album. Usually all my music peeps appreciate it, but not nearly as much as I do. I fell in love with it when I first heard it. and I fell in love with it again last night. Cause now I have memories to relive with it even more now. I am not so much the angry and bitter young man that I was when I first heard and related to the album so long ago. But I can certainly see new things in it and relate it to how things feel for me now. In short, it still holds up, even over thirty years later.

I wish the band the best of luck on the rest of this tour. And urge anyone interested in seeing possibly one of the greatest rock shows ever put on, to go. There’s tons of dates across the US and it will venture across the pond for next year. Just go. You’ll thank me. We’ll all stagger and fall, after all its not easy… to bang your heart against some mad bugger’s wall.

Thanks to Adam Talley for the review and above pictures.

Finally had some time to post some thoughts about the shows I attended earlier this week. (20th & 21st)

Let me begin by stating that the shows at the UC were fantastic, spectacular, awesome… I really enjoyed them. And taking into consideration that this is still early into the tour there seemed to be very little screw ups. I attended the original Wall show in NY in 1980 and while it seems unfair to compare the two it also seems inevitable as well.

As much as I enjoyed the 2 shows I attended I also have a few minor criticisms. As most of you know, Roger updated the visuals and themes to reflect a modern take on war and other current social issues. IMO, this really detracted from the original narrative of Pink, the rock star, and made the entire concept seem a bit schizophrenic. I found myself getting carried away/mesmerized with some of the updated concepts/visuals but when the show returned to Pink’s story it felt a bit abrupt and out of place. Having said that I personally didn’t mind the updated visuals at all… they were fantastic, and I had no trouble following any of the story even though some things felt a bit out of place.

Roger has insisted on keeping the music as faithful to the original as possible. Dave K nails most of Gilmour’s guitar parts (from a technical side anyway) with Snowy and GE filling in whenever needed. Harry and Jon faithfully reproduce Rick’s parts. So why the fuck doesn’t Roger rein in Graham Broad a bit to sound more like Nick? He’s just too much over the top, IMO, with too many fills and fancy drum work. I caught myself a few times noticing this and felt distracted. And the thing is that I like Graham and have always defended him in the past but not now. And what’s with the end of Comfortably Numb? I mean WTF?!?!? This was one of the biggest disappointments to me… it just peters out! Where’s the big dramatic finish with Nick’s 4 big drum hits leading to the final flourish? It’s as identifiable and iconic as any other bit of the music in The Wall and it’s gone. All the new inflatable puppets were cool with the exception of the Wife… there were aspects of the original that I liked a lot better (like her hair). My final gripe is the actual Wall coming down in the end… talk about being anti climactic. The bricks just seem to lazily fall over with much of the Wall left standing. The original shows had more smoke and strobes and lighting effects which disguised the simplicity of the bricks falling but not here. Maybe the folks in the 1st few rows found it to be more dramatic.

All complaints aside the shows were still great. The music was spot on for the most part and the sound just loud enough and clear as a bell. Roger knew when to keep the original iconic animation and where it could be updated. The 1st part of Waiting for the Worms featured all the original animation while the marching hammer sequence was all updated with CG work cleverly (and faithfully) reproducing the original. The Trail had a few new bits inserted into the original animation as well. The second half of the show really blew me away. Songs like In The Flesh and especially Run Like Hell had mind-blowing graphics. Vera and Bring the Boys Back Home were emotional and very moving. It was all a blast and a half.

My final observation is that Roger plays the trumpet (during Outside The Wall) about as good as he played the clarinet in the original shows. Give it up Roger and let someone else handle it.