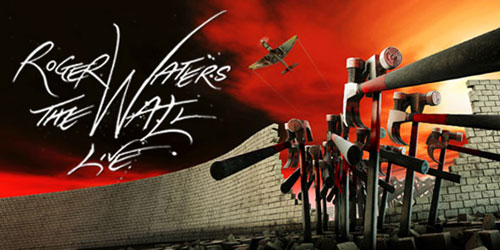 It’s All Over Roger Waters amazing Wall tour concluded in Paris on 21 September (With Nick in attendance but not playing) after sell out shows around the globe. We hope you enjoyed our coverage of every show, something we have achieved since 1999! Thanks to all who contributed. See you on the dark side.Col (Added 21 September)

Harry Waters Solo Show Those attending Roger Waters show in Prague on 7 August may be interesed in catching Roger’s son Harry along with his quartet on the day before (6th) in a solo show. Tickets and information (Added 20 July)

Low Attendance Roger kicked off his 2013 Wall show in Holland on the 18th July to a half empty Arena in Arnhem Holland. The show was added very late in the planning of the tour, so that may account for poor ticket sales. In any event the crowd seemed to enjoy themselves and reviews, pictures & videos are now available. Arnhem Holland (Added 19 July)

Here We Go Again! Preparations are well underway for Roger’s 2013 leg of The Wall show. First pictures are now in of the stage at Arnhem Holland and we are delighted to tell you that AFG contributor Simon Wimpenny is again sharing his most excellent BLOG with us all and assisting AFG with our coverage of the tour. (added 15 July)

Athens Date & Venue Change It’s been announced that Roger Waters Wall show that was to be held in Athens at the Olympic Stadium (OAKA) on July 31st has now been moved to August 1st at Terra Vibe. Tickets already purchased for July 31st will be good for the 1st August but we understand that no refunds are available if you purchased your tickets from Ticketpro as stated on their web site . However it does appear that if you booked your tickets from rogerwaters.com and are unable to attend on the 1st Aug that you will get a refund, as their policy is ‘Should you be unable to attend the new date, we will credit you the cost of your tickets plus the service charge (the ticket transaction fee is non-refundable). We will notify you about the new show details and the refund process via email’. (Added11 July) IMPORTANT CHANGE OF PLANS!!! It has now been announced that due to due to the reaction of fans to the change of date & venue of the Athens show, and as production problems have been solved the show now returns at OAKA on July 31. A win for common sense at last! (Updated 15 July)

Venue Changes. Due to technical, production and curfew issues the August 7th show in Prague has moved to the O2 Arena and the September 1st show in Belgrade has moved to the Belgrade Arena. All previously purchased tickets for these shows will be honored at the new venues. Please contact your point of purchase for information on how this move will affect your seating. RogerWaters.com customers will be contacted directly. (Added 6 June)

Another Wall Show Announced Not unexpected, another show has been added to Roger Waters 2013 Wall Tour. This one has been slotted for 18 July at the Gelredome Arnhem The Netherlands, now making this the first show of this years tour. Tickets go on Pre-Sale at rogerwaters.com on 26 March and will be on pre-sale and general sale through THIS LINK soon. (Added 25 March)

Manchester Date Announced As we predicted, another Roger Waters Wall show has been announced, this one for Manchester England at the Manchester Arena on September 16. Pre-sale at rogerwaters.com starts 27 February and pre-sale at Ticketmaster from 28 February @ 9am (UK Time) (Added 26 Feb)

Athens Venue Confirmed The venue for Athens has been confirmed as being Athens Olympic Stadium (OAKA). Tickets on pre-sale as from 21 Dec. (Added 20 Dec 2012)

CONFIRMED DATES – The 2013 tour will consist of open air/stadium shows, to include such venues as Rome Olympic Stadium, Amsterdam Arena and Berlin Olympic Stadium, etc, as well as two Oslo Telenor Arenas. Roger Waters will be talking about the tour via a special web cast on RogerWaters.com and Facebook.com/rogerwaters on Thursday 15th November from 12:30pm UK time, when more dates will be announced. Tickets for announced shows will go on presale on 12 November at rogerwaters.com/ 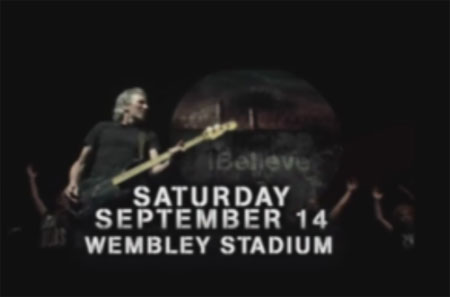 Taken from video that’s doing the rounds. Not yet confirmed but every picture tells a story don’t it.
(Added 11 Nov) NOW CONFIRMED!!! (Added 15 Nov)

Announcement of 2013 Wall dates expected on or around 14, 15 or 16 November. (Depending on your part of the world) Put THREE German Cities (Berlin, Frankfurt and 1 other at a guess) & one in Austria (Our guess is Vienna) on your list of places to visit. Update. We are told that Roger will be holding a press conference on 15 November although this is not confirmed. (2 Nov 2012) (Now Confirmed 9 Nov)

The Wall For Paris In September 2013? We can’t verify it, but it’s being reported that Roger Waters will be visiting Paris and presenting his Wall show at the Stade de France on 22 September 2013. We have not been able to verify this through our sources, but you can read the report for yourself. It’s in German, so if you don’t speak that language, copy the text into a translator! (23 Aug 2012)

2013 Tour We have had a ton of emails asking us about where Roger will be playing his Wall shows next year in Europe. We wish to stress that nothing is finalized at the moment but Roger is DEFINATELY heading in that direction. The cities whispered below in the previous article are NOT CONFIRMED and should not be relied upon at this time. (July 2012)

Roger For Europe 2013? Rumours are running hot that Roger Waters will take his Wall show back to Europe in 2013, playing stadiums, or so we are told. We wish to stress that at this time this is purely a RUMOUR, so please don’t start making travel arrangements just yet! (Added 19 June 2012) UPDATE!!! Although still not official it’s almost certain that Roger will be touring Europe with his wall show in 2013. Tour dates will be announced here as soon as they become available. (Updated 26 June) WHISPERS ONLY!!! Vienna – Austria/ Götheburg – Sweden/ Bergen – Norway/ Horsens – Denmark/ Warsaw – Poland/ Brussels – Belgium/ Amsterdam – The Netherlands/ Frankfurt – Germany/ Rome – Italy/ Bern – Switzerland/ Paris -France/ London – UK (Updated 30 June 2012) UPDATE July 7 2012 Roger confirms he is looking at Europe late summer 2013