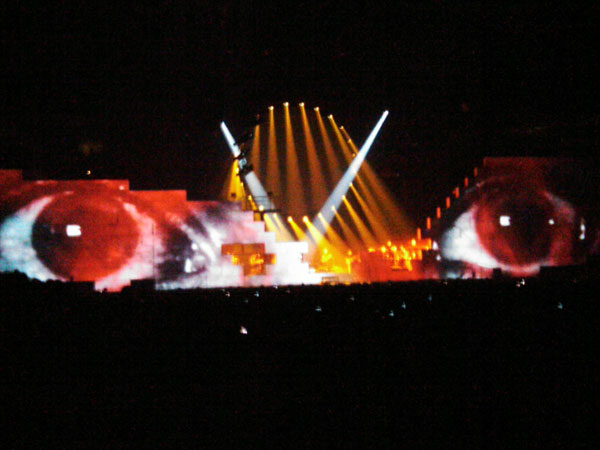 Thanks to Mark Schutte

I had good seats, we sat in the lower part of the arena, section 128, 4th row. I’ve seen Floyd a few times in ’94 including the first Dark Side performance in 15 years in Pontiac, MI, and several Waters and Gilmour solo shows, but this show exceeded all my expectations!! What an amazing concert!

Review and above pictures thanks to Mark Schutte

I was 15th row dead centre for this one and the sound and visuals don’t really get much better than from this position. I would says 10th to 30th row is the ideal, to be able to see the bands faces and interaction obviously row 10 is better, to see the full impact of the visuals then row 30th is best.

The flag bearers came on at the start of the show but unfortunately the platforms that raise up approx 30 feet only went up about 2 feet before coming to an abrupt halt! Roger had to hop on the platform, swing his legs over and then lower himself down onto the stage area in front, he had a little smile on his face when he did this. To everyone that had not seen the show they would not have known anything had gone wrong.

The sound was incredible, I thought it was better than 2 nights before in Pittsburgh but others thought Pittsburgh was better. The little tweaks to the show are still ongoing as are the technical glitches! G E Smiths guitar went down during Another Brick and Harry quickly took over one of the solos on the keyboard until Smiths guitar was back online! Again, to most people they wouldn’t have noticed but to the seasoned showgoer we all noticed right away.

Roger’s hand held mic went down at the beginning of Run Like Hell in the second half of the show, he shouted into the mic “come on, enjoy yourselves” but nothing was heard, he quickly went over to the mic stand and picked up the mic from the fixed stand, however this was also dead. At this point he looked a bit frantic as the tracks intro was coming to an end and the lyrics were due any second! He pointed to the mic and pointed to the crew, within second he started singing the opening lines and the mic was back online.

Roger has been very clever with the projections during the ending of one song and the start of another, he throws your attention to a place where it’s needed whilst appearing somewhere else on the stage and you don’t notice this until he wants you to! This is clear at the end of Is There Anybody Out There, everyone’s watching Dave and G E Smith and the projections until the very end while the hotel room scene is being set up at the other end of the stage and you don’t see this until Roger is seated and the lights and TV come on in the scene, very clever misdirection!

Roger’s nuances are beginning to carry over from show to show now and he looks to be really settling into a routine. There’s a great little thing in The Trial that I pointed out to Jake who was sat next to me for the second half of the show. The projection imagine turns 360 degrees on the flat wall “screen” however as Roger’s walking back on the stage he ducks down so the projected imagine doesn’t “hit” him!

The wall fell great tonight, it fell forward in nearly one piece!! The crew started to wobble the wall at the top and the first couple of rows fell backwards then the rest of the wall fell totally forwards onto the stage area in front, didn’t hit the crowd at all though.

With the exception of the small technical glitches the shows are now getting better and better each night, the band are settling in, the crew know what’s going on and where to be at the right time and everything just feels to be a lot more relaxed.