Thanks to Christopher from Salt Lake City

Some random thoughts on last nights show in Las Vegas aka Sin City.

Very nice to meet several familiar faces at the pre-show meetup, along with some new ones …Ratcub and son, and Simon’s friend Simon, and of course Simon himself along with several others. After a final drink at the bar, a few of us made our move at 7:45 to get to the venue which was bascially a hop, skip, and a jump from where we were inside the MGM complex, but it was an absolute madhouse getting into the venue with the line backed up and everyone being funneled from the bar/restaurant area down a hallway to get to the main entrance. I mentioned out loud we were all sheep being led to the slaughter, and while some people laughed, others were getting annoyed with the whole process of being stuck shoulder to shoulder and moving half a step at a time. Indeed it was slightly annoying, but I thought it was all part of the vibe and festivities, and made the best of it with those who were on a similar wave of pre-concert giddiness.

Once finally in the main arena hallway, we could hear Imagine being played over the sound system, and then literally had seconds to spare before we found our seats and the “I’m Spartacus” bit started. My friend Mike and I had very nice seats 1/4 back and 10 rows up lower loge/right side. Beforehand I thought the quad sound may suffer from that section, but it actually seemed more pronounced with all the bells and whistles humming and buzzing in every direction. Add a few beers and some nice smoke, and it was completely disorienting. Unfortunately many had been stuck in the line to get in, and people were trickling in throughout the entire first 10 minutes. There was some wasted/drunken buffoon behind us yelling/singing during the first couple of songs until we finally had to tell him that yes, we are all fans and we all know the lyrics…but we didn’t pay to hear him sing his karaoke version of the Wall…lol..I mean really! We passed him a joint, he smiled graciously and took the hint, and he was very cool and mellow after that….like a subdued maniac who had become comfortably numb.

Several subtle differences and changes since Chicago and New York, and even some since I last saw the show in Kansas City a few weeks ago. It seemed there was lots of different imagery projected on the Wall, including the massive spiral wave during comfortably Numb along with different images of people, war, etc. throughout the show. Maybe there were some that I just haven’t seen before, as I always catch something new each time, but there definitely was some new added twists and turns. And something I don’t believe I’ve seen yet was at the very end after Outside The Wall, Roger thanked each member of the band individually out loud by first name as they strolled off the stage. And finally, Roger gave some sort of “thank you” speech addressing the crowd and thanking everyone for being there, etc. It was a very sincere personalized gesture, and a nice way to tie up loose ends and end the show.

Needless to say my friend Mike was completely in awe and blown away with this being his first time to see Roger’s Wall. And for myself, it’s also needless to say that I was completely in awe and blown away. This was the 8th show I’ve seen on this tour so far, and it never gets old for me. There’s always something that captures my imagination and/or strikes an emotional chord, and whether it’s a new addition to the show, or perhaps something I may have missed in the past, the show is always full of surprises. I honestly don’t think I could ever really get tired of experiencing it, and with the Wall finally hitting the West Coast in a few days, there will be several more similar (yet different) experiences to follow….all of which will be stowed away in my memory bank for the rest of my life. Stay tuned…

With thanks to Eric “DiamondHead” 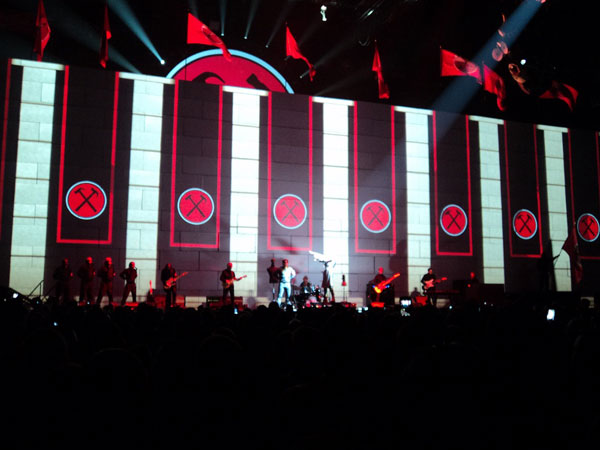 Another month, another trip to see Roger Waters perform “The Wall” again; the greatest concert tour in the history of rock-and-roll concert tours. Only this time I traveled 3 time zones from West Virginia to Las Vegas to see it again. Floor seats again. Only the best. 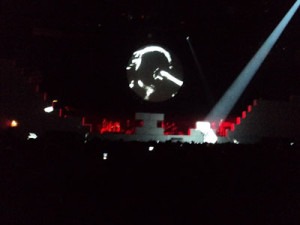 There were a couple small glitches, an audio drop-out during “Mother” and a digital projection pixelation during “The Last Few Bricks”, but who the hell cares? Also, the sound seemed MUCH more thunderous in this smaller arena, the Grand Garden Arena. My hair seemed to move with practically every drum beat. That is a good thing – this monumental production needs to assault all audio and visual senses. And boy this one did.

Some things have changed since I saw it on October 22 in Columbus, Ohio. Seems like there are more sound effects during “In The Flesh?” and “Another Brick In The Wall, Part 2”. Maybe, maybe not. I know I heard some different things. The change in the projection during the first parts of “Comfortably Numb” was an added bonus, and reinforced the idea of Pink just twisting his way further and further down into his black hole. And, in a lighter moment, to “break” the wall into the psychedelia at the proper time, Roger butted the wall with his head. I wonder how many other people noticed that. There were new projections on “Mr. Screen” behind the completed wall during “In The Flesh.” 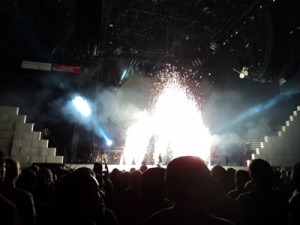 At the end of the show the applause was so vociferous that Roger stayed out for a few extra minutes and described his feelings now towards audiences, compared to what they were when he wrote the piece in the late ’70’s. This I thought was tremendous. Actually thoughout the show he acknowledged the audience in different ways: pointing the microphone to the crowd for “…thirteen channels of shit on the TV to choose from…” and thanking us when we shouted it; pointing out places in the crowd that a spotlight swung to and making shooting gestures with his hand and with the machine gun for “Run Like Hell”. Roger Waters is now having fun playing shows. And it does indeed show in the performances. There seems to be no letdown after more than two months touring with this gigantic production. 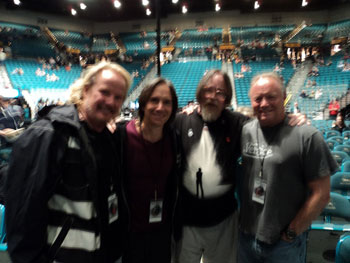 James with members of Venice

Beforehand the members of Venice were wandering around the floor, and I had to ask them if it was indeed them, to which they replied yes. I was stunned. That’s where the picture came from. Me and the three members of Venice! Made a perfect day even more perfect if that was possible. Also, Dave Kilminster walked right by me, but I couldn’t get my camera out and set before he passed.

All in all just the greatest single event of my life. If Roger uses next fall to do some shows in the Southern Hemisphere, I would hope he’d make a short trip back up through the US on his way home to New York. I will pull out all the stops to see this show one more time.

The greatest show before and since ever in rock-and-roll. Masterful. Roger Waters is a multimedia genius. There is NO ONE like him in the business today (or ever for that matter) and when he finally puts up his bass, it’ll be a sad day. But then there is all the great music he and his fellow Floyd members released, together and solo, to quell my sadness. Shine on you crazy diamond!!! 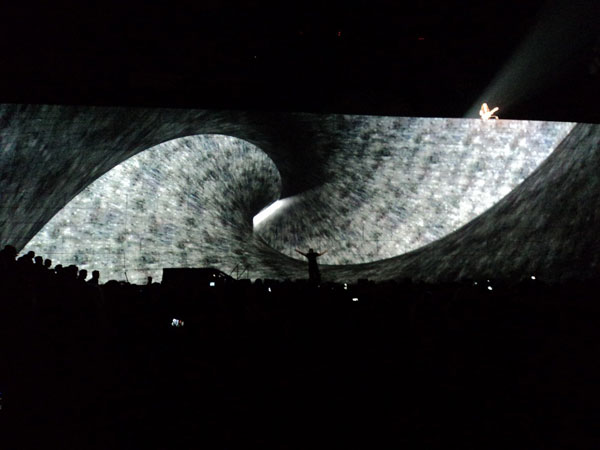 Review and above images thanks to James Sloan

Thanks to James Sloan 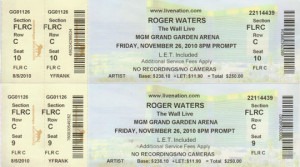