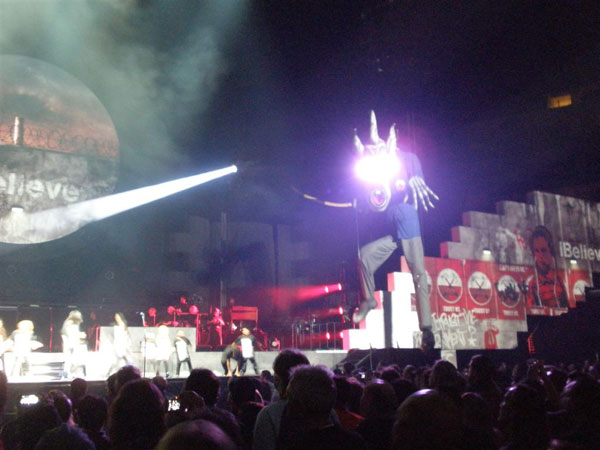 All pictures thanks to Simon Wimpenny

The year was 1977 and Pink Floyd had embarked on their “In the Flesh” tour. By this time in the band’s existence, bassist and lyricist Roger Waters had grown frustrated with concert goers, from what he perceived to be their poor attitudes. He imagined a wall that split him apart from the audience, and then expanded upon this idea, writing a story about one man’s descent into an inaccessible shell of isolation and the breakdown that follows. On November 30th of 1979, The Wall was released, an instant smash that would go on to be one of most critical and commercial successes in the history of recorded music.

Exactly 31 years later, Roger Waters arrived at the Staples Center in Los Angeles to perform a re-imagined version of “The Wall,” as part of a worldwide tour celebrating this monumental concept piece. Although there was no involvement of anybody else from Pink Floyd, this was the ultimate staging of the masterpiece, packed with over-the-top visuals, soul-stirring musical bliss, and powerful statements. For the 20,000 people in attendance, it may have been a pricy ticket, but in return they received an unparalleled live experience for the eyes, ears, and mind. 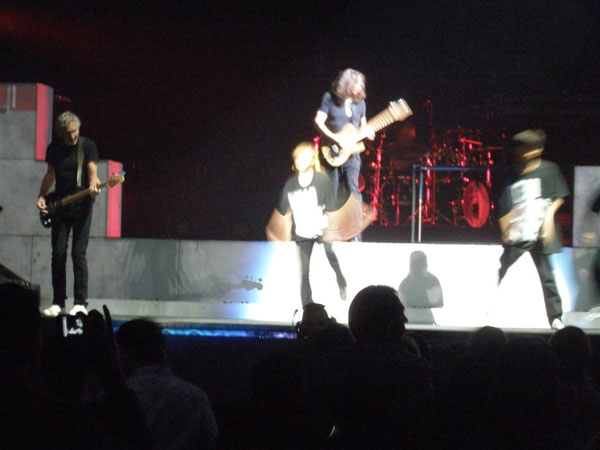 This was not the typical concert in which the musicians run through the numbers, complimented by the standard multicolored stage lighting and a few fog machines. Each song was accompanied by an array of groundbreaking props and dreamlike digital projections that brought the story to life.  50 foot tall puppets, enormous remote controlled inflatables, and unbelievable pyrotechnics would transport the audience from the home of the Lakers to a dark circus conceived by Waters and his imagination.  Some of artist Gerald Scarfe’s animation from the 1982 film version of “The Wall” was integrated into the narrative, but mostly, new artistic footage was used, presenting this epic piece of work in a refreshing way.  All of this visual splendor amounted to a countless amount of “oohs” and “ahhs.”

From an eruption and shower of fireworks during “In the Flesh?” to the destruction of the massive wall at the end of “The Trial,” it was nonstop thrills and nonstop action. “Another Brick in the Wall Part II” featured a giant puppet of a goblin-like schoolmaster lurching over the band on one side of the stage. A short while later, during “Don’t Leave Me Now,” a similar style puppet of a praying mantis-like ex-wife hovered over the band from the other side of the stage. Live actors would reenact classic scenes around the band, while thought provoking images beamed behind them all. And then of course, was the flying pig that made its way around the arena bowl through much of the second half of the show.

But these astounding sights wouldn’t mean much if the music had fallen flat. This music has meant different things to different people, but for all of those who grew up listening to “The Wall” and Pink Floyd, the music is nothing short of spiritual. For the tour, Waters put together a fantastic band mostly made up of the same musicians he took on the road a few years back for his production of “Dark Side of the Moon.” They would nail the melancholy of a song like “Nobody Home” and simply rock on “Young Lust.” They brought out the spookiness of “Hey You” and the radiance of “Comfortable Numb,” that made one feel anything but numb.  One of the most poignant, musical moments of the show was when Waters stood alone under the spotlight with an acoustic guitar, strumming the chords to “Mother” behind gritty footage of his younger self playing the same song. The band gently eased in behind him with a breathtaking landscape of sound. The music they made on stage was greater than the sum of their parts, in which the sound was living and breathing, very much alive.

Every song that the band performed was a chapter to a larger story, split into two acts. For those unfamiliar with the subject matter of “The Wall,” much of it is based on Roger Water’s own experiences. Many of the trials and tribulations that Pink (the protagonist of this magnum opus) is faced with are events that come straight from Water’s childhood and young adult life; the loss of his father in World War II, the abuse of his school teachers, the oppression of his overprotective mother, drug abuse, the disintegration of his marriage, and the mental breakdown of friend and Pink Floyd co-founder, Syd Barrett. All of these incidents would turn out to be “another brick in the wall.” 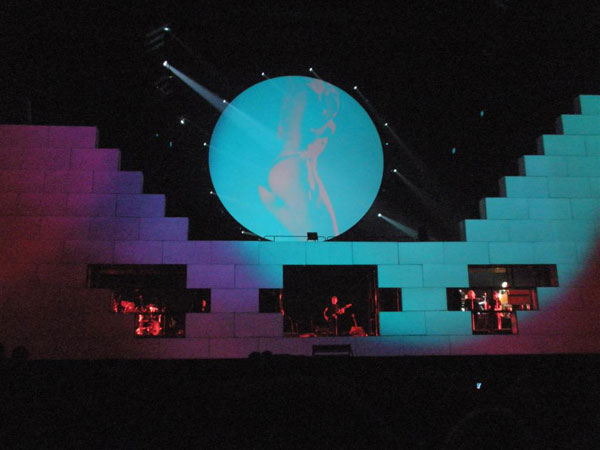 However, for the 2010 production of “The Wall,” the show worked on two levels; whereas the original story saw Waters addressing the wars he fought internally, he has now brilliantly shaped it to address the wars of the world as well. “The Wall” had always had political overtones, in its Orwellian ideas against totalitarianism and fascism, but now they have been expanded upon to address the all-too-real evils of the world we live in today. There was a clip of bomber planes dropping dollar signs, corporate logos and religious symbols over entire towns during “Goodbye Blue Sky,” while photos of soldiers who lost their lives, submitted via Facebook, were beamed across the massive wall during intermission. Later on, Apple’s iBranding was targeted in another clip, when the words “iFollow” were written alongside of sheep, as well as “iPay” next to tombstones. And was the footage of surveillance cameras zooming in on citizens during “Run Like Hell” a reference to the Patriot Act? There was definitely no shortage of material dealing with the Big Brother themes of 21st Century.

In the grand finale, the massive wall that was erected during the show came crashing down as a metaphor for both of the interwoven themes, and left the audience with an open-ended ending. One viewer might see light at the end of the tunnel, while another might see something grimmer. What road Waters himself chooses to believe remains unknown, but what is clear is that he seems to be in a more positive space these days. During one of the few breaks between songs, he spoke candidly with the crowd, stating he was no longer the “poor, miserable, fucked-up young Roger from all those years ago.” 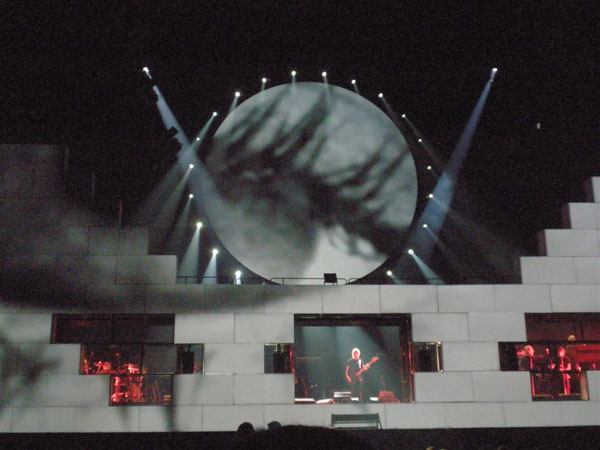 Today’s Roger seems to have traded in that well-documented ego and attitude for humbleness and warmth; Veterans have been invited to pre-shows, while children from less affluent schools have been invited on stage to play the role of the students during “Another Brick in the Wall Part 2.” He’s made appearances on late night television shows, something unimaginable years ago, and ever since the even more inconceivable Pink Floyd reunion at Live 8 in 2005, relationships with some of his former band mates have improved; drummer Nick Mason would play a handful of dates with Waters in 2006 and 2007, while guitarist David Gilmour joined Waters onstage for a couple of acoustic numbers benefiting the Hoping Foundation earlier this year. Gilmour is also expected to join Waters for one undisclosed show on this current tour to play “Comfortably Numb”.

The Wall stage show will definitely be on the road for much of 2011, with the European leg kicking off this spring. Following the tour, Waters’ future on the road is uncertain. He has stated that this tour could be his last. If that is the case and you have yet to see the legendary musician and mind behind most of Pink Floyd’s greatest work, and/or you want to experience a show that pushes the envelope perhaps more than any other concert in history, it is suggested you either book that vacation across the pond that you’ve been putting off, or cross your fingers for a second swing through the states. Rarely is it that a performer can harness sound, color and mood so remarkably on an arena level, and at the core of this marvelous spectacle is a story and statements that still resonate with the audience, perhaps even more  today than they did all those years ago.

Thanks to Joe Raniere 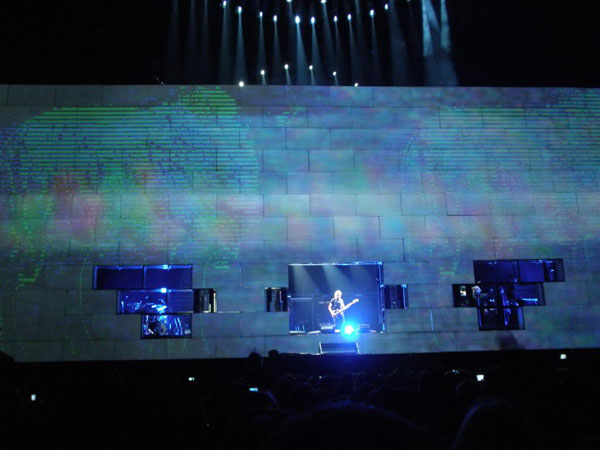