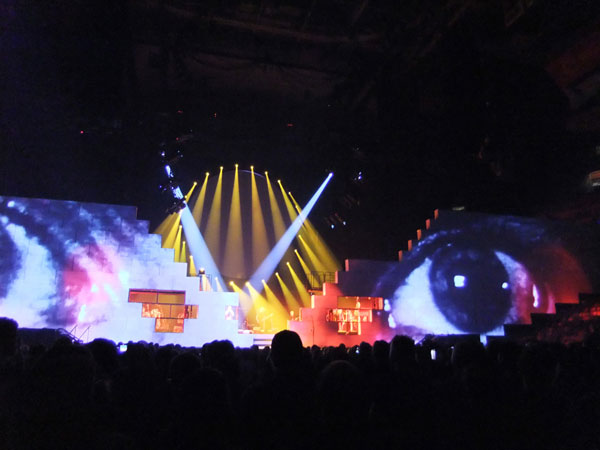 I was at the show last night and in answer to anyone’s questions about Roger’s voice I think that he sounded fantastic. The sound guys had an issue with him during Mother which resulted in some heavy feedback and his voice was non-existent during Bring the Boys Back Home but other than that he sounded wonderful.

The visuals are stunning. There is nothing else to say about them. The combination of Scarfe’s originals with the CGI effects is nothing short of breathtaking. I was lucky enough to score a ticket on the floor in the 14th Row Center so I had a fantastic opportunity to see the show up close.

For anyone who is worried about the new meaning that The Wall has taken on in Roger’s eyes I would not worry too much about it. I think that it is to be expected given his outspoken views on the state of world politics and the socio-economic divide that exists.

Robbie Wyckoff is a great singer but I would prefer Kilminster or Jon Carin doing the vocals on Gilmours parts. I suspect that he was brought in because his range is pretty high and that is required on songs like The Show Must Go On. His take on Comfortably Numb reminds me of Van Morrison’s version from Berlin. Venice did a fantastic job covering the harmonies.

The Wall was my gateway album for Pink Floyd and resonated so strongly with me as a young adult. I never thought that I would have the chance to see it performed live and to have this opportunity has been the highlight of 20 years of concerts for me.

Review thanks to carrols77

”The Trial” sequence was definitely the highlight last night….HANDS DOWN….Roger executed this marvelously and truly showed how brilliant an artist he is YET AGAIN…. I felt like I was transported back to 1979/80 lastnight…
The other thing that struck me is how the Wall made THE ACC look and feel…it was like I was in Massey hall and not some huge arena…the Wall staging takes up %20 of the venue….and lastly after seeing MANY concerts in my time the audio Roger brought was stunning…NO ONE has EVEN COME CLOSE TO WHAT I SAW LASTNIGHT………….THE PA USED IS MASSIVE …and spread around the ceiling in MULTIPLE AREAS..I’ve seen surround sound before but my JAW DROPPED…THIS BLEW AWAY EVERY OTHER SHOW OF THE HUNDREDS I’ve been to…and that includes multiple Floyd gigs

Thanks to Johnny P

The sound was FANTASTIC! The theatrics were amazing, the musicians were tight, Roger sounded….good.
Some of the themes he projected, weren’t of my liking, and that I was afraid of. However, putting that aside, it’s definitely a show well worth attending.

P.S., their was quite an annoyance with the LED screens of all the people taking pictures, video. I’ll admit to taking a couple pics, literally 3 pics of the show. This show was well documented last night!

Thanks to Ksenia Zubkov

I would suggest waiting to see it, it is worth the wait for the rush of seeing what he put together for the show, in person. The set up on entering is the entire stage side of the arena, like 20% of the entire room,, is the Wall. The middle empty section is filled in during the show, up until intermission, when the entire end of the arena is “walled off”. It looks fantastic.

Throughout the entire show, multiple ( and I really mean multiple!) HD projectors fill the wall with various pictures, films, animations, etc. It really works well, and is top-notch state-of the art stuff. The imagery is updated and the genuine reaction of the crowd to the “Bring the Boys Back Home” part was quite emotional and powerful. I can only imagine the effect on a war-weary U.S. audience.

There are the puppets, and they are updated versions of the originals,and they look really good. The mix of old/new, live action/animation, and other props and special effects seemed to strike a perfect balance to me. I’ve seen hundreds of shows over the years, and this was by far the best sounding live show I have ever been to. Like a fine pair of headphones good.

The quadraphonic system really does work, with crystal clear sound and separation. There were two small glitches, both with Roger’s mic, but with all of the sights and sounds coming at you, you hardly noticed them. I’m sure it was first-show problems, and should not be an ongoing concern. The band is note perfect. Really, that’s all that needs to be said. I know there will be the “it’s not Pink Floyd” crowd, but it does not take a thing away from the music, it literally sounds just like the original albums. Perfect. So, if you want an honest opinion, go see this show. It is expensive, but the old saying “You can see where the money went” certainly applies here. I can’t say enough about how good it is. Like I said, I have seen hundreds of shows, and this is hands down the best I have ever seen. (and as a Springsteen fan, this is not an easy statement to make!)

Review thanks to Mike Topham 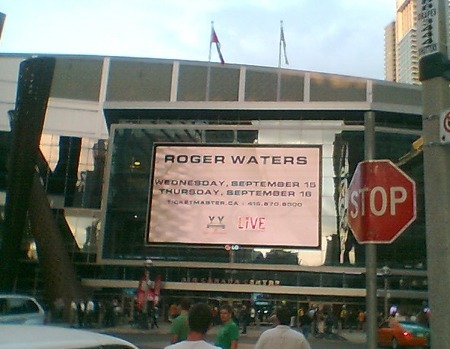 I saw the Radio Kaos Tour when Roger Waters stopped into Hamilton, Ontario around 1987 and both Pink Floyd tours after around the same time Delicate Sound, Momentary Lapse, Division Bell era. Music aside the creativity that went into those tours set a new bar for me as a teenager early in my concert career. Now almost 23 years later the anticipation of seeing THE WALL in it’s original format was building by the minute.

When we first walked onto the floor and saw the Wall going up each side of the hockey rink the size of this show started to sink in…. heck if I hadn’t seen KISS just 6 nights ago it might have seemed even Bigger!.. But this still had a stadium feel.

This was probably one of the best opening songs I have seen in concert. It was full steam ahead from the men on the bridge with flags, the fireworks, seeing Roger in his hoodie, lights swirling and that buzz under the hood of we’re seeing THE WALL !!!

… and the famous… “so ya thought ya might like to so to the show…” was truly electric and almost overwhelming. The lighting stretched back to the far end of the arena with additional speaker arrangements… not sure if it was quadraphonic or just for effects… as we were too close to the stage to hear….but as the helicopter sound kicked in this lighting unit above the main stage appeared to have a small speaker stack on it as well and it moved forward with the spot light shooting into the crowd as if to be the light on the front of the helicopter, the sound moved with it…really wicked…

Some kids ended up on stage to help sing over the track for Another Brick. The overall sound was really good for a 1st show and most of the other musicians including Roger’s son on Keyboards were hard to see or get into with this large production unfolding…. except a little at the end of Run Like Hell as the band were in front of the wall closer to us.

I actually heard “Mother”start with Roger on acoustic and have the video it but I will spare you listening to the faint 1st verse that seemed to fall down with technical difficulties… the song never really got back on track for me. The Wall of course was being built brick by brick as Side 1 Played out and the barrier starts to fill in… to the point yes where you could barely see the band.

After the intermission HEY YOU starts and the entire song almost is play behind the Wall…it’s cool and as the light shines thru the cracks and you hear the band playing it really shows what Roger was thinking about years ago of feeling that distance from some of the audience…those who were not engaged with him as he performed . The guy beside me after introducing himself 4 times and asking about doing ACID kept praying for David Gilmour to walk out and join in. I didn’t feel that was going to happen. The Gilmour stand in did fine at most points but this was not Pink Floyd we were seeing… it was Waters and The Wall.

The imagery on the circle screen in the back and the overall movies on the WALL itself were familiar from The Wall movie and previous Tours I had scene…all very cool to watch.. The actual Wall is said to be 240+ feet across .

“One Of My Turns” turned out beautiful as you can see below in the video and “Run Like Hell” with the flying pig got the crowd up, dancing and celebrating it seemed… ..as security told the front row to move back… and we all started to chant along with “THE TRIAL”… “bring down the wall, bring down the wall..” the WALL did come down..crashing faux bricks.

No encore, just The Wall and alot of entertainment to go along with an amazing album… I will leave the comments open here for others who visit the shows as the tour unfolds. 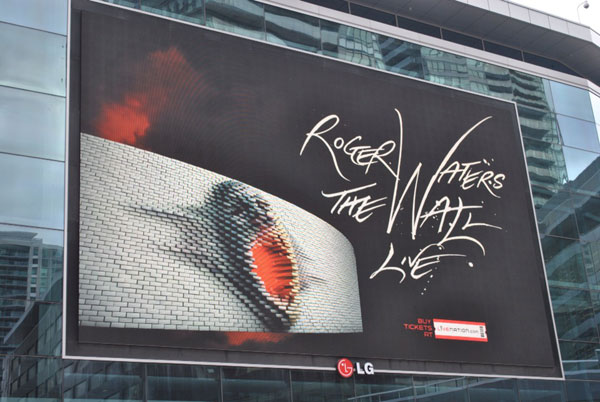