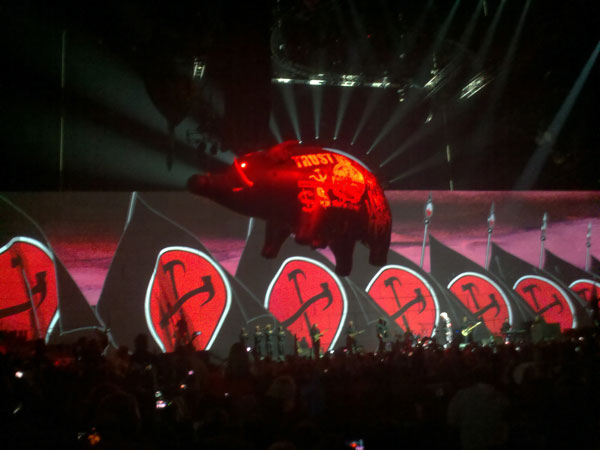 Thanks to Cliff Call

More random impressions and thoughts on The Wall 2010…

Amazing show last night in Kansas City with much of it being similar to the first shows of the tour, yet with several minor additional nuances added here and there since I last saw the shows in Chicago and NY. The sound was phenomenal from my location on the floor, serious hallucinatory quadraphonic-overload with sounds and noises flying left and right, and then behind and in front….sometimes separate and other times all at the same time. The dancing kids during ABITW pt.II were absolutely great, smiling and really getting into it, with several of them given a mini-solo spot…one doing an Irish jig across the stage, while another was doing cart-wheels at one point. If Roger ever gives up music, I think he has a future as a choreographer! Roger himself seems to be way more animated and at ease since I last saw the show, fully getting into the vibe and the character throughout the show. One example involved the addition of the machine gun. A while back, I saw the video of the machine gun when it was first introduced to the show, and had thoughts that it might be veering on the cheesy side…well it wasn’t. With Roger acting full-throttle as the dictator, with grimacing facial expressions (with tongue-in-cheek and a wink of the eye), and militaristic body-language, he definitely looked quite sick and evil, and the addition of the machine gun only added to this theatrical element. He looked quite satisfied after blasting away at the audience, and everyone seemed to love it as far as I could tell. Of course there was a little but of humor and campiness to it all, but in no way would I call it cheesy. It was simply great theater and done very well.

The bottom line: the entire Wall show that was built up and torn down in Kansas City was another mind-boggling experience of sensory overload with sound and vision, where at times it was breath-taking and at other times gut-wrenching coupled with thought-provoking, inspirational, jaw-dropping amazement. To quote the great man John Lennon: “Tears of sorrow, waves of joy”….this show had me in it’s grips on all emotional levels throughout the night. I want to see it again….and I definitely will. Stay tuned…

Just got back from the gig. In Short, absolutely astounding! Every effect and cue was present tonight without a single hitch. The Teacher puppet dangled menacingly, the Plane crashed, etc.

The Only real bummer was that the sound was just a bit fizzy. This was my first concert so I’m not exactly sure if that’s normal or not…oh and everything is INCREDIBLY LOUD! If you’re even considering bringing earplugs, bring them.

Apart from that, the show was brilliant, tear-jerking, moving, explosive, and refined. All in all another very good gig from Roger!

Thanks to Fish Paste

WOW what a show!! and what an after party!!

We made our way down to the floor, and headed over to see my friend Mark Strand who had been at the four shows previous with us. We had a chat about how good the previous few shows were as Mark hadn’t seen the shows since Chicago and the band were so much tighter now!

I wanted to see the show from the side again tonight so we headed up to the side level next to the stage on the right and took our seats in the second row from the front, behind the yellow tape which separates where the wall fall used to happen!

The whole section where we were was pretty empty and one of the security guys came over and told us to sit wherever we wanted in the section, we were perfectly happy so stayed put! The kids during Another Brick were great tonight and really made the best of their time onstage, a lot of them coming out in front of the others and dancing about and doing step dancing. When they exited the stage they stood at the top of the steps waving to the crowd and encouraging them to applaud louder, which they did!

It was a great first half with no mistake that I noticed at all. Kami stayed in her seat and I ventured down to the floor to see Mark again. They have shortened the intermission by ten minutes now so the intermission is only 20 minutes in total. I walked back up to our seats and took my place for the second half, for some reason the section was packed for the second half! Not sure what happened, whether they sold some cheap seats at the box office for a cheap price or what but it was pretty much full for the second half.

Robbie has started singing a bit more melody during The Show Must Go On, personally I don’t like it but just pointing it out as an observation, he started doing it at the St Louis show and did it at the Kansas City show after that. Looks like it’s gonna be staying!

Roger came onstage in his usual leather jacket and black biker boots, saluted Robbie, wagged his finger for Roger to follow him and then made his way to the podium in front of the mic stand. He pointed to his mic and Robbie handed it to him, he also pointed to the machine gun on the floor and Robbie picked it up and put it over his shoulder. Roger took the machine gun from Robbie at the end of In The Flesh and started to shoot into the audience; it’s changed slightly in that he fires a few shots, moves around then fires a few more and then does it again, I think it works better than doing the whole sweep around in one shoot! After he fired the gun he took his mic and said “So how many did I get?” and then grinned. Roger again got a little confused between the microphone and the megaphone that he talks though during Waiting For The Worms and sang into the megaphone instead of the mic towards the end but made a quick recovery!

During Nobody Home roger held out the mic for the crowd to sing into but held it out at the wrong time and the crowd singing “on the TV to choose from” was heard back! He still thanks the crowd though.

The wall fell good and in a couple of large pieces but the sides are still not falling, all the people that saw the shows earlier on in the tour really got to see something that will probably not be seen again!!

So after the show we headed out to the outdoor plaza that we had walked through earlier, the place was absolutely packed with people dressed in Halloween costumes! Its not really a celebrated holiday in the UK and while a few kids dress up in costumes there’s not many adults do and certainly nowhere near as many as here in the US! In fact we had seen people in costumes at the shows for the last 3 nights!! No one blinks an eye it’s just normal to see witches, sailors, wizards and zombies at a show!