Roger came out for the opening of In The Flesh and has taken to actually running across from one side of the stage to the other, not walking but actually running. He’s done this for the last 3 or 4 shows and is clearly enjoying himself from the second he steps on the stage!

The crowd were VERY reserved tonight, the centre and right section all sat down after IN The Flesh and i counted at least 3 people around me all sat on their Iphones/Blackberry’s all on Facebook!! WTF!! I tried to not let it bother me and enjoyed the show the best i could while still sitting down!

The kids tonight weren’t very good at all, they seem to have really gone down hill the last 4 or 5 shows, not sure why! Three of them did run over to the left hand side of the stage and stood on the riser there and did a bit of air guitar but it wasn’t anywhere near as good as Chicago or Philly or some of the other places. Snowy made a couple of mistakes on his solo that were really noticeable, i think that’s the first time I’ve heard him mess that up!

When Roger introduced Mother tonight he did the whole Thank you, No Thank YOU thing about four times tonight and at the end of it said, “pantomime, don’t you just love it” When he explained what he was going to do with the track Mother he told the crowd “I’m going to sing along with that poor fucked up miserable Roger “ He was clearly having fun tonight.

Noticed the vocal separation a lot more on Mother tonight, usually you cant hear the new and old Roger vocals much but tonight there was definitely two separate tracks, a lot more noticeable than any other show I’ve seen and it sounded great. The projections have gone back to the original for Mother as well with the red blood NOT coming in front of the camera tonight!

Goodbye Blue Sky was just as good as ever and i think the symbols at the end falling down works really well now, a lot better than how it was before.

I had to laugh tonight and in front of me was a family of three, what i presume was mother, father and son. When the images of the naked women came on the wall during Young Lust the father covered the kids eyes and wouldn’t let him look at them! i thought he was joking at first but he was being serious, the kid was probably 11 or 12 and his dad just wouldn’t let him see them!! as soon as they had gone he took his hands away from his eyes!!

Just as the last brick had been placed in the top row of the wall there was a huge problem!! it looked like the whole middle section of the wall was going to fall down! It juddered and the whole middle section raised up about 6 inches!! I’m not sure if one of the hydraulic lifts moved when it shouldn’t have done or if one of the hydraulic rams that go through the bricks was caught on something but it could have been a huge problem if the bricks had cone down and it really wasn’t far off from that happening! the roadies came out and started to manoeuvre the bricks on the first 5 or 6 rows back into place and soon sorted it out.

One thing I’ve been meaning to mention is the lyrics in Empty Spaces specifically the line “ send flowers by phone” it still amazes me that that line was written 30 years ago and has so much relevance even today as its something that’s done even more so these days, the lyrics are just timeless!!

At intermission i went over to see Jeff and his wife, they were absolutely speechless and were completely blown away by the whole show! I know Jeff’s and HUGE Gilmour fan and i knew he as a touch worried just how well Dave K handled the guitar parts but after hearing the first half of the show he wasn’t worried a bit and was really looking forward to hearing Dave’s solo on Comfy Numb.

I went back to my seat with a couple of minutes to spare before staying seated for Hey You, Is There Anybody Out There and Nobody Home, the crowd finally started to rise out of their seats at the end of Vera and remained standing for most of the second half which was great!

Dave missed a couple of notes on the Comfy Numb solo last night in Houston and he commented on this when we were chatting before the show, i love when this happens as you just know that he is going to be putting 200% into the next nights solo and he did exactly that it was absolutely fantastic.

The second half was totally faultless, and the more i hear it the more it is m favourite half of the show, i was actually never a huge fan of Waiting for the Worms or even the Trial but its so much better live and takes on a whole new meaning seeing it performed and acted out in front of you.

He again used the light flashes when he uses the machine gun.

The crowd had just about woken up during Run Like Hell and i have to say i think more people were clapping along with Roger than at any other show I’ve seen! i looked around the venue when Roger encouraged everyone to “enjoy yourselves” and it looked like at least 75% of the crowd were clapping!

I love seeing the hammers when they are full screen all the way across the wall, i never tire of seeing these projections! As i said above i also enjoy the trial a lot more now after seeing it performed live!

The way the wall came down tonight was excellent, the top 3 rows fell forward and then it looked like the rest of the rows were all going to fall backwards but just before they did they actually al fell forward, i counted about 8 rows falling all in one block onto the front of the stage, i got a great “wall wind” about ten seconds later!

The band then came out and the confetti came down.

Roger has started to talk the last few shows about the alienation he felt 30 years ago and how he doesn’t feel this any more but feels the connection to the audience.

Review and above images thanks to Simon Wimpenny 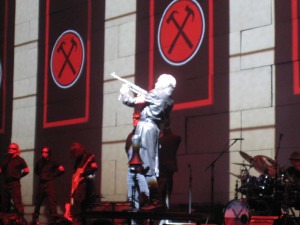 HOLY SHIT THAT WAS THE GREATEST F*CKING THING EVER

boy, I knew this was going to f*cking awesome, but Goddamn, even my high expectations on nearly everything were exceeded

yeah, no Gilmour , but still, there was not a moment I was ever “out of it” or bored, none of the filler tracks felt like filler, which is a miracle IMO (It’s a Miracle, ha ha)

anyway, there was one stupid, STUPID thing that happened before the show

less than TEN MINUTES after they opened the doors and I was about to find my seat, the damn FIRE ALARM went off, yes, you read that correctly, THE GODDAMN FIRE ALARM

at first, I thought it was some sound check but it was clear it was a fire alarm when some automated PA came on and jsut told everyone to evacuate, so EVERYONE including the event staff and vendors had to go outside, and fortunately it was decent outside weather wise

the fire truck, ambulance, police cruisers came by, it looked like “In the Flesh?” from the movie (except no police brutality or mass arrests going on thank goodness) 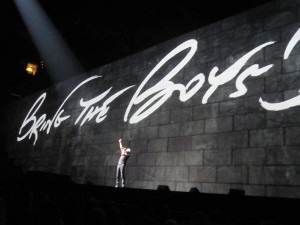 at one point some people thought Mr. Waters was simply in the process of making a grand entrance and was going to come out in full fascist regalia out of some stately limo and banners of the hammers were going to fall down the walls outside of the American Airlines Center and trumpets were going to play and bombs were going to go off and Waters would have a bunch of women and babies to kiss, etc., but no

eventually, whatever happened cleared up, and we all were allowed back inside and the show “went on” like nothing happened

I would like to know EXACTLY why the fire alarm went off, I heard all sorts of crazy rumors, someone threw a lit joint into a garbage can and it caught fire, a gas leak, a BOMB SCARE (WTF?!!), but I would seriously liked to know because I got scared and thought the performance was going to be postponed or canceled 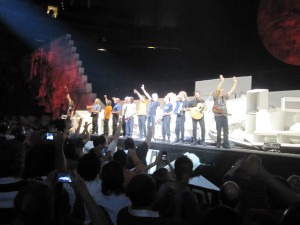 anyway, one thing I have to mention, the intermission, oh dear heavens the intermission, the showing of those dead from war and such, my God, I cried like a little girl, I do not know what got to me, whether it was seeing people like Gandhi, Sophie Scholl, Eric Fletcher Waters, Neda Agha-Soltan or men and women who died on 9/11/2001 or in Iraq or Afghanistan, or other resistance fighters, my goodness it was EXTREMELY moving, and I am not a guy like Glenn Beck who cries at the drop of a hat

kudos to you, Roger Waters, for paying proper respects to the unjustly dead.

Review thanks to Ferguson

Regarding the fire. I saw a hamburger stand over by Old No 7. It appears a grill was fired up before the exhaust vent was activated or a grease fire in the kitchen. It was real. My thoughts similar to Ferguson. Otherwise, The Show Must/ Did go on. I am still amazed. What a production.

Review thanks to Patrick

Thanks to Ron Webb