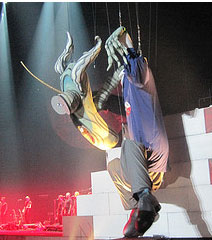 After seeing the 1st 3 Wall Live shows in Toronto last month I thought that would be enough live Roger to last me awhile. Well about 10 days ago I started to get that feeling that I really wanted to see just one more Wall Live performance by Roger before he winds down the tour in North America , so with the help of friend I was able to grab nice seat just stage right below Mr. Teacher in the lower bowl for The Wall Live 1st night in Montreal on 10-19-2010. I knew what to expect because of what I had experienced in Toronto for the opening 3 nights , but also knowing that I had an incredible seat I had decided to really soak in all the visauals , music and of course Roger’s antics for the show in Montreal last night.

Well I started yesterday morning by getting to the Via Rail station only to find out there was a derailment at Cornwall that may cause a delay in getting into Montreal , I was a bit worried but soon forgot about the possible travel issues by playing the Wall Live 2010 audio snippets on my mp3 player all the way to Cornwall( 3 hours ) and then continuing on to Montreal on a bus to arrive right on time. Nice! I was in the perfect mood for what I knew was going to be another incredible Wall Live Performance because I had been blown away by those 3 Toronto Wall Live performances in September and in fact since first seeing Roger live in 1984 with Eric Clapton on the Pro’s and Con’s tour, I have never been let down with the 10+ Roger live concerts I have seen up to the DSOTM final show in Toronto. 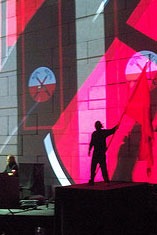 My expectations are always set high for Roger’s live performances whether they are solo-based or a mix of solo and Pink Floyd performances. I must say that The Wall is possibly my favorite Roger work of all time and as indicated I was not let down in the least after those 1st three shows in Toronto on 9-15 9-16 and 9-18. I really enjoyed each Toronto night from different location and took in many different aspects of the massive 2010 Wall Live production. On each different night in Toronto I saw and heard things I had missed from the previous night(s). That is how HUGE and complicated the 2010 Wall Live production is. So a bit of advice if you are attending a 2010 or 2011 Wall Show , make sure your senses are operating at 100%, you do not want to miss 1 minute of this faboulous show Roger is putting on for us. The ‘ puppets ‘ have been updated and are gigantic , the graphics are mixed with images from the past ( Scafe animation ) and have been updated to remind us of some of the more important issues going on in this world. The 3D and 2D projection is spectacular and it’s hard to take you eyes off the wall , even after it is built completely by the intermission.

Now to finish with my review of last night Wall Live in Montreal 1st night , which may be my last Roger live show ever. So I arrive at the bus station only to find out that the Bell Center is just 3 blocks away and the pub pre-show meetup is only 5 blocks away.Nicer! I have just enough time to have a quick drink with a few Floydian Friends old and and new and then head down to the Bell Center for the doors opening at 7PM( I always like to be in the venue early ). No issues with entering the Bell Center , very nice and friendly french-Canadian people over there. Once in , I head straight for my seat and not really knowing the layout I was blown away to realise that I will be just 20 feet from the edge of stage right ( where Roger does spend some time during the show) and just as I thought Mr. Teacher is tightly rolled up directly above me just awaiting a blast of air and the first note of ABITW Part 2. For all 3 Canadian Wall Live shows I have been to digital cameras ARE ALLOWED but there is a very strict NO FLASH rule and in fact they now announce something from Roger to that affect right before Outside the Wall\ In The Flesh show opener. Beware if you consistently flash with your camera , you will escorted out or your camera will be taken away.

That been said I did take a good amount of non-flash pics with some success despite the lighting challenges. Well after the first notes of Outside the Wall and In The Flesh Roger appears in his long black hammer leather jacket and the MONTREAL crowd goes insanely wild with cheers. I thought the cheers were loud in Toronto but for the first 2 minutes Roger could not even start to sing because the Bell Center crowd was cheering so loud , he thanked us and started the show in full swing with pyro and the great burning Stuka crash at the end of In The Flesh( see my youtube video ). As in Toronto Roger pulls up to the mic after ABITW 2 and intros Mother but I could not believe it last night in Montreal when he actually brought up the 1977 ‘ Spitting Incident ‘ in Montreal and told us how much of changed man he is since those days. Having watched and followed Roger since 76’ , I know this change for the better to be true. Every song that Roger and his band has re-created for the Wall Live 2010 is bang on. You should know the ‘ surrogate band ‘ by now , and they are doing a great job. Robbie W. is handling David’s vocals very well. and boys from Venice are more than handling the harmonies. There is really no BIG blowout moment in the 2010 Wall Live , the performance is more then a rock concert it is a modern rendition of what Roger created 30 years ago , the 2010 Wall Live shows are solid musically and tight and ENJOYABLE for 2 hours end to end and in my opinion no encore is needed , just a nice little acoustic Outside The Wall after Roger tears down the 2010 Wall at the end of the show.

I have a feeling I have witnessed some of the last great live rock and progressive music performances in the 2010 Wall Live performances , and if you are or have every been a Pink Floyd or Roger Waters fan, go and see the Wall Live this year or next year. Even a seat in rafters ( where I sat 2nd night Toronto ) is worth the price of admission.

Review & above images thanks to Onthewing

Thanks to Marc Samson 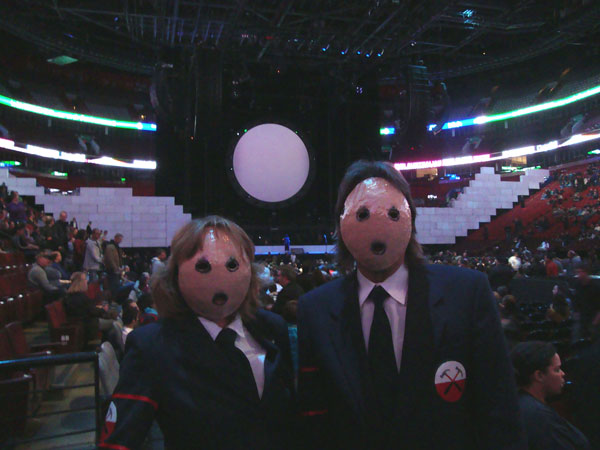 Here they are again! Brian Petruk & his wife attended their second Roger Waters show in Montreal after being blown away by the Ottawa show a couple of nights before.

This would be the third time I’ve been to Montreal to see Rogers shows and the crowd are always fantastic here and tonight was no different. Maria had rolled up a small bunch of flowers for Brent the homeless guy and gave them to him inside the venue, he later put these on the stage just before he threw Pink up there! Security at the venue was the strictest I’d seen, no one was allowed to even rest on the front rail, not even the people sat in the front row! I was sat at the right side again tonight, right under the plane, my second favourite place.

Dave’s guitar went silent during Another Brick pt1 and it was a good 5 or 6 minutes before it came back online. It was well into Another Brick pt2 when it was audible again. One of his amps went down and when the techs changed the amp they mistakenly pulled the power plug for the acoustic guitar amp so Dave never played on Goodbye Blue Sky either!

The teacher puppet came down as normal but its ass caught on one of the bricks behind and this fell onto the stage, didn’t take long for one of the crew to come out and pick it up and replace it on the wall, it was one of the ones with the metal frames attached as well so wasn’t one of the light cardboard ones!

It was evident from the off that the crowd were going to be loud but seriously, I’ve never heard a crowd cheer like they did while Roger tried to introduce the track Mother. They erupted with cheers as Roger spoke French and thanked the audience. He was about to start to his speech about the video from Earls Court and singing double track etc but every time he opened his mouth and spoke the crowd just went wild! I’ve never heard anything like it at any shows before! Roger made mention to the spitting incident here in Montreal as you can see above.

I noticed that one of the bricks above me looked to be held together with bright blue tape!! I couldn’t understand this and thought at least use white tape! 10 minutes later one of the crew reached out from behind the wall and pulled the tape off, it wasn’t holding anything together and had obviously just attached itself to a brick without being noticed.

As I said earlier the security guys at tonight’s show were really strict and they were stopping everyone from making video clips on phones, cameras and any other device. I could see them walking around and standing in two’s just looking out for people and then heading out to stop them!

Second half was a lot better than the first, no visible mistakes and Roger was as lively as ever.

I never tire of the second half, especially seeing the equipment come up from the stage and the whole Run like Hell sequence. I noticed Harry came out to get onstage with Jack, his brother and Roger’s younger son, He stood inside the rail rocking out and constantly watching Harry play the keys.

The crowd went wild yet again when Roger “found the door in the wall” and the screen went into 3D overdrive as above! Now, onto the wall falling.

Remember yesterday I said that the wall at the show in Hartford & Ottawa didn’t fall down at the sides just in the middle? well it was the same tonight and I know why! They had added some type of clamps to the bricks on the top of the wall on the right hand side, this now stops them falling!! so only the top couple of rows on the right side fall down and the whole area of bricks above the seats just don’t move at all [see above]! This is such a shame as its just not the same, I’m real disappointed they have done this but as I mentioned earlier I thought this was the case after the people getting covered by bricks at the second Nassau show.

The wall fell ok in the middle tonight and it didn’t take long at all for the crew to remove the bricks from the front of the stage so the band could get back on to perform Outside The Wall. The confetti fell really well tonight as well and looked great from my seat, picture doesn’t do it much justice though. 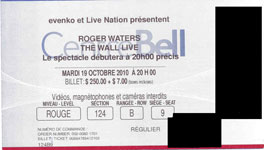 Thanks to Mike Arnason