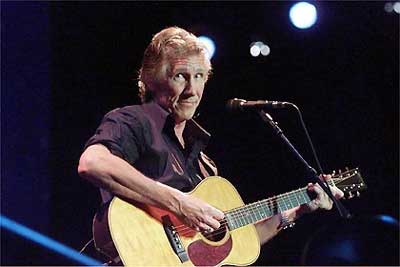 A Fleeting Glimpse From Roger Waters.

Thanks to Yujo Rodrigues for the pictures. 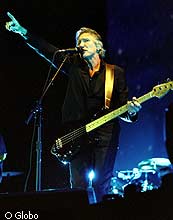 Having travelled for 12 hours by bus from Curitiba to Rio, me (43) & wife (33) & son (14) agreed that we could not loose the simplest detail of this show. Arriving right when the gates were being open (6 pm), we crossed/ran over most of those 2000 people that were already awating and were lucky to take a place right in front of the stage (some 5-8 m from the place of guitarists Chester Kamen & Snowy White, and some 8-10 m from Roger’s place), where we stayed for 3 hours until the show begun. In such a position we were able to see every datail and face expressions of the performers, but of couse, it was Roger that hipnotyzed us most of the time (behind us, some 40000 people who were not so lucky). It is interesting that in such position you have the opportunity to try to attract the attention of your idol, and Roger particularly demonstrated so much attention and kindness to his brazilian fans.

Many could be said of the setlist & the performance itself but I prefer to leave this to the specialized press that certainly will make their own comments. On the setlist, i would say that is was exactly the same as the previous shows in Chile/Argentina, with Each Small Candle at the end. However, its those details above mentioned that i would like to make my comments. 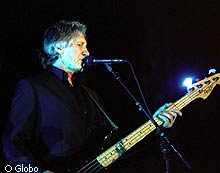 It was interesting that as the show was going to the end, during the Brain Damage solos, Roger went to his right corner of the stage and, in the dark with no light & no microphone, he cried a “thank you” for the closest fans. Then moved slowly to other 4 places until until his left corner and repeated his action, demonstrating great kindness & love to the audience.

We waved our hands many times as we tryed to attrach Roger’s attention, but it was my right neighbour that was more lucky: he raised a white t-shirt with the words “Roger, The God of The Gods”. He made it for some 10 minutes that Roger finally could read it (sure he read it) and then he pointed to the guy and smiled. Very interesting.

On Roger’s left side of the stage someone cast a kind of a collar on the stage, that he took and put on himself and played the rest of the show with that collar. When the show was over and Roger was walking to the back of the stage, he took his collar and turned to the guy that sent the collar and pressed the collar to his heart, demonstrating his affections.

As Roger sung “mother should i trust the government” he made a face expression indicating clearly that you “should not trust”. During “Every Strange’s Eyes”, Rogers face expressions was so intense that sometimes appeared that he was about to cry. 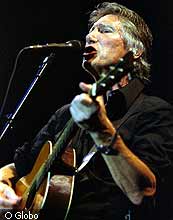 Some errors occurs while performing and that is not noticeable by most people. Kamen played a wrong chord during “The bravery of being out of range” and Roger started to sing the 2nd part of “Brain Damage” in the wrong part. At least this proves the he is as “mortal” as we are… However, clearly noticeable is that the sax didnt made any sound on the first appearance of Mr.Norbert, but he made the crowd go crazy on “Money”.

Having watched all fof the biggest international artists that played in Brazil for the last 20 years I can say that, whithout any risk of being wrong, this is the most impressive and sensational performance that i have seen. Maybe because the artist was so close this time, but certainly because Roger gives you a differente impression than other artists: that he is not interested in being an eternal idol or getting mountains of money, he got deep feelings as we, from the closest audience, could check while he was playing. 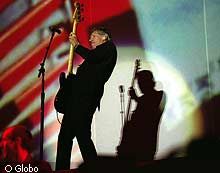 Me, my wife, my sister in law and her boyfriend arrived at the show venue before 3 hours it started to get better places to watch it. We sat on the (hot) floor and stayed there, around 10 meters from the stage set. I couldnt say anything, I was so filled with emotion at that moment, looking at everything and trying to believe I was there waiting to see ROGER personally.

The temperature was very high, something about 35 C, and the pre-show music played Genesis and Eric Clapton songs until the beginning of the Waters show. The place was at maximum capacity (about 30.000 in attendance), but everybody was so polite, and calm, there were loud speakers and sound equipment over all the place, up, down, left and right becoming a sound evolution of feeling. Really there was absolute histerya when we saw Roger coming in at the sound of IN THE FLESH. I couldn’t believe I was seeing the man who I never thought I could see live.

Roger followed your custom set list. IN THE FLESH The sound very high and pure, and SNOWY and CHESTER’s guitars were unbelievable. At the end Roger said in Portuguese: “OBRIGADO – thanks for coming (in English), and he repeated OBRIGADO (thank you) several times during the show. When he came on the stage set he was wearing his traditional black coat, but soon he took off, because the high temperature in RIO.

THE HAPPIEST../ANOTHER BRICK The crowd went mad, this is the most known PINK FLOYD song in Brazil, everybody jumping and screaming..fantastic!!!

MOTHER- We could appreciate the nice voice of KATE KISOON (In this moment I remembered a friend because he told me at one time that KATE was a personal friend of him in Holland.

GET YOUR FILTHY / SOUTHAMPTON DOCK Super sound!!!! The Final Cut is one of the my favourite albums. I sang together with Roger and my eyes were wet, but my feeling was only happiness.and what happiness!!!!

I was paying attention to the crowd, and some guys who were near me, and I could hear them saying: I CANT BELIEVE IM SEEING ROGER, and other saying NOW I CAN ALREADY DIE!!! ..and another THE SLIDES AND PROJECTIONS ARE FANTASTIC!!!!

PIGS ON THE WING/DOGS – This was the most spectacular part of the show for me, it was very good to see the PIG flying on the screen, and after the best song of the show DOGS, Roger playing cards with the other members of the band while his son HARRY and ANDY WALLACE were making the long solo keyboard.

WISH YOU WERE HERE SEQUENCE – The crowd was so excited because its a very known piece of the Floyd career , SHINE ON part 1, Welcome To The Machine (the projection of the video clip like we know, that mechanical monster, and that head cut by a knife, after which, we could hear that sound from the beginning of WYWH, and everybody was screaming and singing the song… VERY COOL.

Finally they played SHINE ON part 2 to finish the first half of the show. N, and we heard nothing of his solo sax, but… everybody understood and applaused him anyway. And I can’t forget the shining mirrored star circling high above the set during this song. After Roger thanked the audience and stopped for a twenty minute break.

Returning he again thanked the audience for their patience, and the crowd responded by chanting a brazilian “OLE, OLE, OLE, OLE, ROGER, ROGER”in unison.

The second half began with SET THE CONTROLS (for me a great piece but the people here in Brazil didn’t know this song very well like we PF fans.) The general audience loved the next song sequence because DARK SIDE is a phenomenon in Brazil, everybody has a copy in their houses. There was a special feeling and everybody sang BREATHE IN THE AIR, TIME (Graham Broad showed how to play drums!), and MONEY.

Afterward ROGER did a sequence of his solo carrer playing EVERY STRANGERS EYES (Andy Fairweather Low is GREAT!), PERFECT SENSE 1 & 2 (I heard one guy saying: I came here only to listen PP ARNOLD singing, she is the best!), BRAVERY OF BEING…, ITS A MIRACLE (everybody put their hands on the air when ROGER sang “A BRAZILIAN GREW A TREE”, and finally AMUSED TO DEATH.

I must to say that so many people there didn’t like this piece because they don’t know ROGER SOLO CARRER, but even so, they gave applause in the end. Everybody loved the BRAIN DAMAGE, ECLIPSE sequence (everybody knows these songs), and ROGER committed a mistake singing YOU LOCK THE DOOR before the right time, ….he stopped for a moment and then went on singing, and when he sang YOU LOCK THE DOOR again in the right time, everybody applauded showing Brazilian politeness. After, ROGER was so excited like us, as he received a souvenir from somebody in the audience (a neck lace) and he wore it for a short while.

This segueyed into COMFORTABLY NUMB and there was a delirium around the place, chiefly when the two guitar players were playing the solo on the high riser of the set. During all this time we were dumb struck seeing all the projections on the screen, and lights and sounds coming from, behind, left and right (THUNDERS, BARKING, EXPLOSIONS, etc), simply the BEST.

Roger introduced all the members before the encore of EACH SMALL CANDLE. He sang it in a different way, making his voice more thin. This made the song all the more beautiful and special.

Well, after this, ROGER went out at the door and left us all very satisfied and hoping some day to watch another show again, because this was not simply a rock show, THIS IS THE GREATEST SHOW ON EARTH! I dont want to any other shows now, only if it is PINK FLOYD coming, or ROGER again.

Many thanks to Charles Portilho 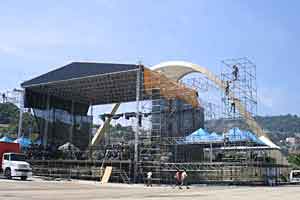 In The Flesh
The Happiest Days Of Our Lives
Another Brick In The Wall, Part 2
Mother
Get Your Filthy Hands Off My Desert
Southampton Dock
Pigs On The Wing, Part 1
Dogs
Shine On You Crazy Diamond, Parts 1-5
Welcome To The Machine
Wish You Were Here
Shine On You Crazy Diamond, Parts 6-9 INTERVAL
Set The Controls For The Heart Of The Sun
Breathe (In The Air)
Time
Money
The Pros And Cons Of Hitch Hiking, Part 11
(5:06 AM – Every Stranger’s Eyes)
Perfect Sense (Parts I and II)
The Bravery Of Being Out Of Range
It’s A Miracle
Amused To Death
Brain Damage
Eclipse
Comfortably Numb