For me, this was the concert that nearly didn’t happen. Over the previous months, I had been half expecting to miss it as my wife was expecting a baby on 30th May. As it turned out, our daughter was born on the day before the show. The next day, there were some unexpected problems and we had to check her into a specialist children’s clinic in Frankfurt on the afternoon of the performance. Of course my family had priority, so I’d already accepted that I would miss the show and nearly gave away my ticket to one of the hospital staff. I’m glad I didn’t. With 45 minutes to go before the start, my wife told me to go. She knew how much I wanted to see the concert. I made sure that she and baby were OK then sped off in my car for the short ride across the city.

An avid Floyd fan since around the time of the Animals album, I knew all of their music but had seen them live only twice. Both times it was the post-Waters line-up, first at Manchester’s Maine Road in 1988 and then again at the Frankfurt Festhalle in 1989. I’d never seen Roger live and I even missed The Wall in Berlin, despite having lived in Germany for the last fifteen years. So, this was my chance to correct this.

I arrived at the hall and parked up about 20 minutes before the start, which is cutting it fine, I know. Even so, many would agree with me that the organisation at the front gate was abysmal. Many hundreds of people were still cramming forward trying to get past the two girls who were checking the tickets. That would be OK for the usual all-day trade fairs they hold here, but was laughably inadequate for a rock concert with a fixed start time. Whistles and catcalls showed the queuing crowd’s disgust at the slow progress. However, the crowd’s general impatience probably allowed me to get my digital camera in so easily – the security guy frisked me in such a rush that he didn’t even see the pouch attached to the back of my belt.

My seat was on the first row of the right hand side balcony about halfway back. Bounding up the steps leading into the hall I heard the closing bars of In The Flesh. A man behind me swore as he fell heavily in his haste to get in. I had read somewhere that Roger hates to be even slightly late for anything, and he wasn’t about to change this habit now. Many people were still waiting behind the ticket barriers. (In the interval, I talked to the guy next to me and he said that despite being sold out, the hall had looked around one fifth empty before the lights went down at the start.) I squinted at the seat numbers and found mine just before the end of Happiest Days of our Lives. I’d made it!

I love the moment when you get into a concert hall or stadium and the vastness of the place opens up in front of you. For years, Mercedes have always rented out the whole of this hall for the biyearly Frankfurt Motor Show and that was the last time I’d been here. It looked a lot bigger today. The arena below was all seated, so it was far less crammed with people than for your average Festhalle concert. It was only when I compared the size of the behind back projection screen with that of the band members that I realised how large that single screen was. It spanned the whole length of the stage.

The lighting was non-spectacular when compared with, say, the Pulse show, so it seemed to fall quite some way below PF’s standards. But, according to the interview in the tour program, Waters says he feels that overly fancy light shows detract from the music. Overall the stage design was good and I soon found myself concentrating on the constant pictures, film and animation being projected onto the screen. I don’t know how it was for the other people there, but the first half dozen songs sailed past me leaving little lasting impression. I had a printed copy of the set list from your site with me so I knew what to expect but now I think back, I can’t even remember Southampton Dock being played. I do remember feeling a bit disappointed during these first few songs because it all seemed so average. In hindsight, it wasn’t and my feelings were probably due to my mind being elsewhere after my personal turmoil over the past couple of days.

The point in the concert that changed it all for me was Dogs. They played it well and I liked the way the other band members went off to play cards to the side of the drum kit during Harry Waters’ long synth break, with quadrophonic barks and howls echoing around the hall. Harry Waters was particularly true to the original music whenever he played anything, no doubt because he grew up with it first hand. This was pure Floyd and now I really got into it. From then on the sound seemed better, and the band stayed tight together. Even Chester Kamen’s hairstyle made him look like an early 80’s Dave Gilmour from where I was sitting. By the way, when the lights came up for the interval, all seats seemed to have been filled.

The songs were well chosen and skilfully played, so it’s quite difficult to pick out highlights. Wish You Were Here is my favourite album and, much to my delight, they performed all of it apart from Cigar. Shine On was excellent as were the tracks chosen from Dark Side of the Moon. The Amused to Death songs were also performed particularly well, though I sensed that the people in the crowd who hadn’t heard them before grew a little bored.

Unlike the spectacular PF light shows, there weren’t many truly ‘goose pimply’ bits to the concert, but I particularly remember the way all the main house lights were turned on for the “But first our global anthem…” part of ATD’s Perfect Sense II, giving the sense that the entire audience was singing along. That got a big cheer. Another nice touch was the chance the audience got to travel back in time to the Floyd’s early years when flowing paint was projected onto the screen (I think that was during Set the Controls but am not sure anymore – I know they did it at least twice). The backdrop tribute to Syd during Shine On and clips of the early band were also nice to see. One thing I was really pleased with was that I managed quite by chance to start filming a short motion picture clip at the point on Shine On where the large rotating crystal globe appeared and rose from the back of the stage.

Much of the crowd in the arena who hadn’t already forgotten about their chairs surged to the front of the stage just before the first encore (Comfortably Numb) and Roger surprised me by bending down to sign several autographs for fans at the end of that piece. I call myself a fan but have to admit that I had never heard Flickering Flame until tonight when it was played as the final encore. To be honest, I didn’t really take to it and felt that it was an anticlimactic finish to the concert.

Waters didn’t say very much during the show but still he interacted quite well with the crowd throughout. He also seems to have accepted some of his deficits, for example the backing vocalists covered for him during the points when his voice tends to give out on the albums, sometimes to the point where he didn’t sing those lines at all. I have the feeling that he has tickled his own taste buds with this tour and that we will get the chance to see him on the road again soon. On the whole, it was a polished and impressive concert – the music took centre stage, and the effects fitted in nicely around it. The band of very talented musicians rounded everything off very well. Most of all, the fact that I managed to get to see the show at all makes me very happy. 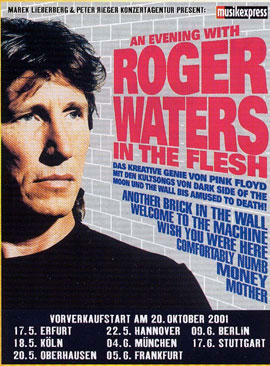 Thanks to Rainer Schneider