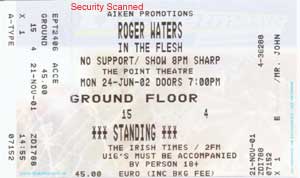 So ya thought ya might like to come to a show? Well, this ain’t quite The Wall, but it’s not exactly a pile of nostalgic rubble either. He may have lost the lucrative Pink Floyd brand name in a custody battle, but the original architect of The Wall is determined not to let people forget who it was that held all the creative cards.

On his current In the Flesh tour, Waters wisely avoids trying to replicate a Floyd show, but instead delivers a compact spectacle, using simple background visuals, smart surround sound, and a band of veteran musicians, including Andy Fairweather-Low, backing singers P.P. Arnold, Katie Kissoon and Carol Kenyon and guitarist Chester Kamen, along with the former Thin Lizzy guitarist, Snowy White.

As the unmistakable intro from In the Flesh boomed out, and those familiar animated hammers strode across the screen, the grey-mulleted Waters strolled out along a ledge behind the band, and opened with an extended segment from The Wall, incorporating The Happiest Days of our Lives, Another Brick in the Wall Part Two, and Mother.

For the next three hours, Waters and company performed condensed versions of Pink Floyd’s greatest albums, replacing their characteristic sheer bone-crushing power with some light, stylish interpretations. It may not have pleased the hardcore Floyd fans, but it gave Waters a dignified way to avoid becoming a threadbare pocket Floyd.

Not that this show was lacking in head-swimming moments. Extended works like Dogs, Set the Controls for the Heart of the Sun and Wish You Were Here came close to blowing the mind, although the triptych of Breathe, Time and Money seemed somewhat skeletal without the full Floyd muscle behind it.

Waters cleverly slotted solo pieces such as Perfect Sense, It’s A Miracle and Amused To Death into the Dark Side of the Moon segment, rounding everything off with Brain Damage and Eclipse, then ending on an exuberant Comfortably Numb, with Chester Kamen admirably handling vocals, and Snowy White leaping on to the ledge for a final guitar duel with Kamen.

(Above) Our globe trotting friend John E managed to get his Tour Programme autographed by Roger and the rest of the crew at this gig.

From ‘Hot Press’ Billed as “an evening with the creative genius of Pink Floyd,” this rare appearance from a key member of one of rock’s most successful outfits was always going to be something special. And so it proved.

Greeted with rapturous applause by the capacity crowd, Waters, silver-haired and grinning stalked around the stage, his bass strapped around him like a sci-fi weapon. Accompanied by a top-notch band including ex-Thin Lizzy axe-man Snowy White and the legendary Andy Fairweather-Low, he took complete command of proceedings from the off.

The faithful were rewarded in spades with highlights from throughout his career including ‘Another Brick In the Wall’, ‘Money’ and ‘Comfortably Numb’ all delivered via a stunning 360° quadraphonic sound system. Other early highlights of this two and a half-hour marathon included a breathtaking version of ‘Shine On You Crazy Diamond’, Waters’ epic ode to Syd Barrett and the equally memorable, ‘Wish You Were Here’. The sheer majestic sweep of these timeless Floyd classics heard in a live setting left most of the audience open-mouthed in awe.

Inevitably, there were a couple from the Floyd’s magnum opus, Dark Side Of The Moon (the ninth greatest album ever made, according to a recent survey) including the aforementioned ‘Money.’ and ‘Eclipse’ which was accompanied by a near life-size total eclipse, courtesy of the giant back projection.

Pigs didn’t fly but this was as close to a Pink Floyd gig as made no difference.