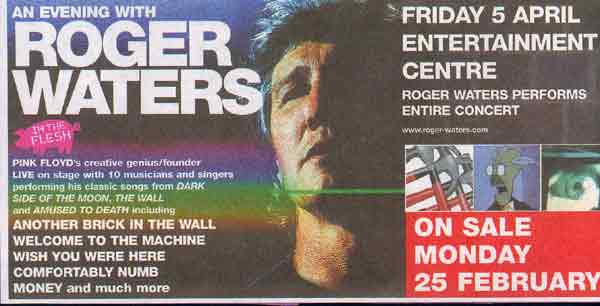 I headed over to the Glasgow Arms in the afternoon to say Hi to Colin and all the other Floyd freaks, which was pretty enjoyable in itself. Colin was, understandably, beaming about his imminent meeting with Roger. (READ ALL ABOUT IT) I collected some “Flickering Flame” posters (and a few beers) and headed off to meet up with my concert going mates.

As has been the pattern, the show started right on time. I never could have imagined how good Floyd would sound live, through that mind blowing quadraphonic orgasmo-sound. The songs were pretty much the same as In The Flesh, but as I said, it was a million times more moving and magical when it was live.

Roger’s voice was really very good (I still think he may have lip sinked a part or two). His classic aggressive bass playing was out in full force. Roger certainly appeared to enjoy himself, at times walking to each side of the stage to rally the crowd (in perfect sense) or just to wave. He did seem like he was going through the motions once or twice, but I couldn’t really

see his facial expressions. I don’t know how the Sydney crowd compared to those of the past few weeks, but I thought it had an awesome vibe through it. Roger got standing ovations to CN and one or two others (I think I stood for most songs!!!). Thunderous applause to everything else, not surprising when it’s been well over ten years since any Floyd was here.

The band sounded quite fantastic. I’ve always been a member of the “without Gilmour it doesn’t sound right” camp, but I think the band were quite faithful to the originals, and did a fantastic job. Of particular note was Harry Waters, who did an excellent job with both the Floyd classics (including the last part of Shine On) and Roger’s solo stuff. The guitar solos were more faithful to the originals than the versions on ITF, and I was quite surprised to find myself grinning like an idiot during the Comfortably Numb duelling guitar solos (I had always thought it would suck without Gilmour). I also grinned like an idiot during the drum solo at the beginning of Time, bloody awesome sound. Shivers! Flickering Flame was very well done, and in my opinion, is a much nicer song than Each Small Candle. I was very pleased to see Roger do that one.

The visuals were tasteful and appropriate. The video to Money was very cool. The Memorial to Private Bill Hubbard at the end of Amused to Death was quite moving.

That’s about all I can say. I was so immersed in the music that I didn’t really take mental notes of the various details. If you are lucky enough to have tickets, you are sure to enjoy it. We all agreed it was the best show we have ever / and probably will ever see. He is certainly one of the greats. THANKS ROGER.

Thanks to Pete Molloy

Waters thumped out Floyd classics with power and authority. With such a rigorous set list one might have thought he might have just been going through the motions by now – but no, he and most of the band, were loving every minute of it. Through the opening crashes of ‘In the Flesh’ to an emotional rendition of ‘Mother’, I lived the dream of hearing live those songs – you know – the ones that kind of change your life forever.

And what followed – the other songs – yeah, you know the ones that would have had the same effect if you hadn’t listened to ‘The Wall’ first, but none-the-less have a huge impact (come on, some of you must know what I’m talking about!). First half highlight (imo) – ‘Dogs’. Chester Kamen was brilliant, the keyboardists – brilliant, the drumming – brilliant (and I’m not a fan of Graham Broad), Roger – brilliant (he pulled some great faces tonight, but none greater than at the card table after losing a hand – if anyone has a photo please put it up somewhere).

Could the second half of the show get any better than the first was the question. The answer (imo): It did!

Maybe because it didn’t feel like Messrs Gilmour, Wright and Mason were missing so much (as it did in the first half, particularly during ‘Shine On’) – not that I was expecting to see/hear Floyd as such (it was great that this was a different band and they played like this band and not as a poor imitation of the others) – but some pieces (or parts of pieces) are so filled with the original artists personality that it’s ‘just not the same without them.’

Second half highlight (imo) – ‘Perfect Sense’. PP Arnold – WOW!!!!!!!!!!!!!!! The set followed the usual list, except ‘Set the Controls..’ was played before ‘Shine On’ (if I remember correctly) and with ‘Flickering Flame’ as the encore.

My only disappointments were: Snowy White (as usual he doesn’t appear interested, doesn’t play as if he’s interested, and after 25 years still hasn’t learned how to play ‘Floyd’ style), Chester’s guitar – a little too ‘dirty’, but Chester is a fine replacement for the brilliant Bramhall. The rest of the band: brilliant. And Roger – well he was at the top of his game, vocals, guitar, even on the bass too!! Off to bed now. Might just put on my ‘In the Flesh’ CD to gear me up for tomorrow night’s show.

Thanks to Mark Jensen

Simply Outstanding ,Seat was excellent . The Best Show I have seen in Twenty Years.

Shine on You Crazy Diamond in it’s entirety 1-9 was wonderfully perfect.. Dog’s was incredible . Roger sang on Every Strangers Eye beautifully and even the high notes he sang it.His distinctive Bass Sound was great . The sound was fantastic every note was heard perfectly ,Quad Sound !Chester Kamen is a real find , played Dogs wonderfully also Shine on 6-9 the guitar part after the drowning of the Wind noise was played just like the record. Harry Waters is a great syth player ! Some of the sounds he got from that syth was just amazing . Just listen in the middle of Dogs you know what I mean . Snowy White played Shine on literally to the record just a great guitar player .

All in all I didn’t want it to end . I had been in physical agony all week and yesterday also but that not going to stop me to see the greatest musician of the last 30 years. The Visuals was stunning . The band truly professional . Anybody who hasn’t see Waters go and see it Truly Wonderful.

Thanks to Simon Macdonald

The In The Flesh concert last night (Friday 5 April) was great. Not just really good great, but absolutely bloody fantastic really really good great. The pre- show meeting was good, with about 10 or so Echoesians turning up and a number of other fans. It seems that Echoes is full of a top bunch of blokes and lasses. I’m sure Col will put a few pictures up on his website when he gets back.

Having not seen Pink Floyd or Roger Waters live before, I had no idea what to expect. We were seated about half an hour before the show. We were about two thirds of the way back, so we were a fair way back, but close enough to be able to see everything. By the time the show started, I had worked myself up to a very high level of excitement. When Roger appeared I was clapping and cheering along with everyone else, with a very large smile on my face.

The smile remained on my face for the whole of the show. A few points why:

– – Rogers entrance made me smile. It was quite cool with him walking along towards the centre of the screen in the dark, raising his arms and encouraging the crowd to go mad.

– – I quite liked the images which increased in size almost unnoticeably (I first saw it in Mother). It wasn’t anything special, I just liked it. It was also a bit of a recurring theme.

– – Set the Controls was just tops. It was possibly my favourite song of the whole show. It makes for an excellent live piece of music.

– – The projections of the stills with pictures of televisions, but moving pictures showing on the televisions was a nice effect. The film showed during The Bravery of Being out of Range seemed to be of the Vietnam war though, not the Gulf War, which it seems the song is referring to.

– – The sun shaped mirror bally type thing was cool. The object in itself was of no great interest, but the light sparkling around the room kept me entertained.

– – The music, of course, was brilliant, and I loved every second of it.

All simple things, but then I’m a simple person. I can’t wait to hear some recordings of this show. Roger Waters in Sydney, 5/4/02 recordings will be something quite special, because it’s _my_ show. 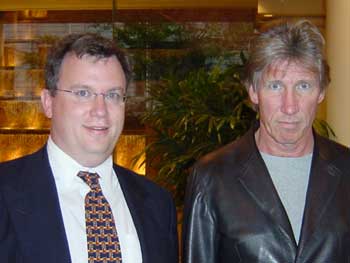