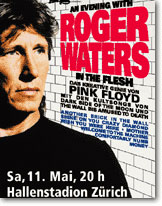 On May 11th 2002, I was fortunate enough to see Roger Waters for the fifth time on his current world tour – and it was by far the most exciting, the most unique and unforgettable show so far. I must say that, after having seen his performance in Milan the day before, I would not have thought that there might ever be another gig that would possibly top the one in Italy, but I was wrong – quite obviously! I was blown away by the amazing sound, and the extraordinary atmosphere in the Hallenstadium in Zurich (Switzerland). I was one of many people who was having tears in the eyes – not only during the opening song of the evening. Having followed Roger Water’s career for many years, and having seen him performing for a dozen times, I know what I am referring to when I say that this was a show that will go down in history as one of the most stunning one’s ever.

Roger, thank you for a brilliant ‘Perfect Sense’ that night, and an ‘Amused to Death’ that still gives me the creeps when I think back!

Thanks to Bruce Kramer

thanks to Rainer Schneider

He wrote music history with Pink Floyd: Roger Waters. On 11 May 2002 he comes with a Megashow including all his Floyd songs to the Hallenstadion. VIEW met the genius in Paris.

The live double CD from the US tour is called “In The Flesh”. A prick in the meat because of Pink Floyd?

Roger Waters: “Not at all. In English “In The Flesh” means that someone is there – me.”

Did you have hard times? 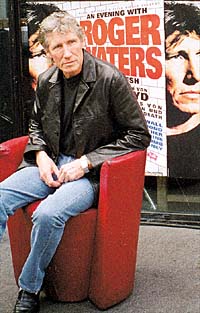 Roger Waters: “The last ten years were hard actually only in my private life. I was separated from the mother of my two oldest children. I married in 1993 again. Also this marriage unfortunately hit the rocks. I try to think positively. Perhaps someone lives just around the corner from me, that I can try a new relationship with.”

What happened in your music?

Roger Waters: “I wrote many new songs, which will appear in 2003 on a new CD. These songs are not any longer as strongly coined/shaped by my childhood as the earlier work was.”

Pink Floyd publish a “Best Of” CD with many of your songs, in the next few days. Pink Floyd manager Steve O’Rourke said, you inquired whether Floyd with the “Best Of” will do a world tour. When he answered in the negative, you said “Then I will do this tour”.

Roger Waters: “That is a complete lie. I have not spoken a word with O’Rourke for over 15 years. That has not stopped the frequent lies. He always did that.”

Why did you really leave Pink Floyd at that time?

Roger Waters: “Because my musical, philosophical, political and emotional position was so different to all the others in the band. It would have been ridiculous under those circumstances to continue working together.”

Why was there controversy over the name Pink Floyd?

Roger Waters: “I wanted that neither the others, nor I, could perform under the name Pink Floyd. I lost the fight.”

The Floyd shows without you ran quite well, despite being tore into by critics world-wide. For you was there a kind of satisfaction?

Roger Waters: “I would have had satisfaction at the most if she had not bought.”

In your music is much blues, much melancholy and emotion. Are you a melancholy man?

Roger Waters: “I have a large potential for melancholy, I am very emotional. I have however at least just as large apotential for joy. If you are a well-rounded human, you can hardly escape depressive tendencies.”

You wrote “The Wall”, a kind of metaphore for isolation, practically all just you alone. Many Floyd fans do not know that. Isn’t that frustrating?

Roger Waters: “Not really. Many find this out when I tour.”

You play in the Hallenstadion. Memories of old times?

Roger Waters: “New memories. Last year I sat with the public at the Eric Clapton concert. Two of my tour musicians play with Clapton.”

You wrote the Song “Money”. You are surely rich. What is luxury for you?

Roger Waters: [To be able to buy] “Airplane tickets. Journeys to be able to see miracles of nature that is nowadays a genuine luxury.” 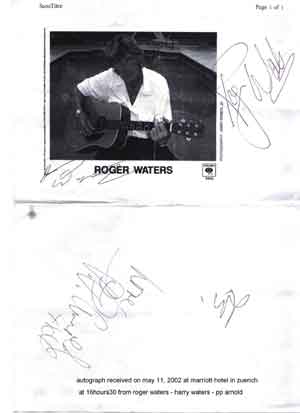 Signed by Roger at the show. Thanks to Bibiane