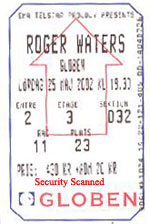 Thanks to Mikael Eriksson

I bought my tickets on the day they were released here in Sweden. I got seats down on the “field” on row 31, with the soundboard a couple of rows behind me. My seats were pretty much right under the left center speaker cluster.
My fiancee, who doesn’t really like neither Pink Floyd nor Roger, agreed to go to the show with me. For her it should be a nice weekend in Stockholm, for me it was perhaps my only chance to see Roger live.

On the day of the show a fan meeting was held at a restaurant not too far from the venue. Lots of people going to the show met up there and chatted. Pink Floyd was blasting at full volume through the speakers. I had hoped to meet Simon W. there but had to leave before he got there, since I had to return to my hotel to meet up with my girlfriend and grab a bite before the show. Still, we had to rush to get to Stockholm Globe arena in time, and just got to eat a sandwhich. Bummer.. 🙁

The show started about 15 minutes late. It seemed like Roger was in a good mood anyway and it was a really great show.

Still, I must say I prefer the way “the others” do the older Pink Floyd material. Some songs just lacked from Daves touch. The songs that are mostly Rogers worked ok though, like the stuff from TFC. “Set the Controls” was one of the highlights in the first set. His solo material sounded just excellent, with the songs from ATD being the highest point of the show. The songs from ATD has really matured over the 10 last years. The “Stop Dave…” from “2001” really takes Perfect Sense to a new level.

The visuals and the scene worked very well. It was enough on the stage not to be too disturbing from the music. A rather good mix between stills and movies. I really enjoyed the visuals used with “Money”. I assume it was quite close to the one originally used.

However I thought it would have very been fitting if he had layed out the lyrics during the “Global Anthem” part in Perfect Sense II. That way he would have gotten all of the crowd to scream out that lyrics. I did sing along in most of the songs anyway so. 😉

And is just me or is the sound somewhat badly mixed and VERY loud sometimes? The lyrics are drowned by the music every now and then. I don’t know if this arena has bad acustics, but I don’t think so. They use to have a lot of musical events there. The sound was much better when I saw PF in -94, but that was an outdoor arena.

Out of four reviews in the press the day after the show, two were very negative, one was quite neutral, and one was very positive. According to one of the papers 12.500 attended the show. In the unlikely event of me a spare moment I might scan them and translate them. 😉

A Special Floydian Event
On 24 May, the night before Roger’s Stockholm Show there will be an exclusive Tribute to Pink Floyd by P-Floyd at “Brobergs Matsalar”, an restaurant and party lounge in the southern part of Stockholm, close to the Globe Arena. The event will start at about 7 pm local time and go on till about 2 am.

There will be a special food and bar menu for the evening and of course a lot of beer available.

P-Floyd are a pure Pink Floyd tribute band and have a line up of professional musicians who have been together for 8 years.They have appeared at an event in Sweden every summer for the last 5 years and draw crowds of around 3000 people from all around Scandinavia. They are gaining a lot of media attention and have been featured on Radio/TV and newspapers.

In Sweden: Pay the correct amount to Postgiro: 69 76 35-1, receiver: D. Friberg, Write Your Name, Address, Telephone number and the amount of tickets. The tickets will be send in about a week.

In other countries: Email peter.rek@swipnet.se or daniel.friberg@telia.com for further information.

Only app. 400 Tickets being released so book quickly