All show pictures unless noted otherwise thanks to Ezequiel

Well, I’m the happiest man in the world!!! Yes, I saw Roger show last night, it was my third time but the others two I was very far from the stage, Now I was in the fourth row..

What can I say that no one said it yet??? It was the greatest show I have ever seen!!

The show was different from the last tours, now they have films, 360 degrees sound system, more effects, and of course, the new guitarrist Chester Kamen. He plays the solos movingly. Harry Waters was great!! The rest of the band were terrific as always.

Roger is God!!! Nothing more, nothing less. 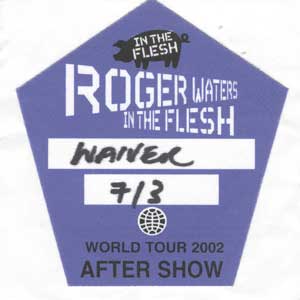 Set The Controls For The Heart Of The Sun
Breathe (In The Air)
Time
Money
The Pros And Cons Of Hitch Hiking, Part 11
(5:06 AM – Every Stranger’s Eyes)
Perfect Sense (Part I)
Perfect Sense (Part II)
The Bravery Of Being Out Of Range
It’s A Miracle
Amused To Death
Brain Damage
Eclipse
Comfortably Numb

Total running time: 3 hours (including an interval of 20 min.)

Wish You were Here

For me, it all started on Wed 6 march, when Roger arrived at the airport. He signed two of my Lp’s and I took some pictures with Him. Yesterday, Fri 8 march, He went to Rio de Janeiro on a XXXX flight, and I work at XXXX !!! You Know what I mean…. I took pics with almost all the musicians and of course ROGER himself… it was amazing…

About the merchandise, they sold black/white T-shirts

(Above) Thanks to Ezequiel

It was incredible, I think I do not need to say this. The show was basically the same as the American tour. The only difference I could detect is a longer “Shine on”, with all the parts included. Chester Kamen, for my taste, is too noisy and dirty playing, and for some solos (for example,”Shine”) he doesn’t have still the correct melodies, but I trust he will improve that during the tour. The solo parts were equally divided between him and Snowy, who did an outstanding work in spite of his limitations. Snowy is a clean bluesman, while Kamen is a distortion lover, but an accomplished slide player, which came out perfect.

The sax player, Norbert Stachel, wasn’t at the same level as the other members of the band in my opinion. Harry, on the other hand, had all the main keyboard solos at his command, and did it fairly well.

The overall show was good enough; Roger sang as good as he can now, did the regular voice syncing on “Every stranger’s eyes”, to my frustration, and his voice failed a bit in a song or two (“In the flesh”, for example). For me, the most incredible part of the show was the second half, with the new stuff. I was breathless. The sound system is incredible. The highest point, again from my point of view, was “Perfect Sense”, with the crowd (about 40000 people) shouting at the same time “Can’t you see?” and an histrionic Roger going up and down the stage with the hands moving like saying “come on”. The images that ran behind him in the giant wall were amazing. I was particulary moved during “Southampton Dock”, with the poppy fields with anonymous faces painted on them, and the crosses brought pain to the people that are still thinking in the Falklands. When he said “Galtieri took the Union Jack”, an incredible, constant whistle came out of the crowd and took Roger by surprise.

He didn’t play the new song, and played “Each small candle” instead. Here I am, still shocked, dazed and confused. A truly unique experience.
Thanks to Trucoto 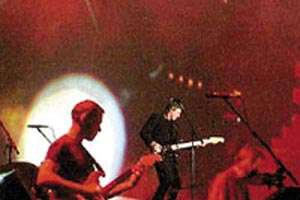 Roger performed in front of a giant screen where images of the film ” The Wall ” were projected . Dressed in black the

The spectacle began on time but later there was rain. There were also delays getting into the venue.

In a climate of nostalgia and emotion, the musician Roger Waters touched last night, before a stage of overwhelmed Vélez, the classic subjects of his old Pink band Floyd.

Theshow In the Flesh, began with the mythical subject ” The Wall “.

The British musician crossed around 20 classic songs of the band that madehim famous: ” Another brick in the wall “, ” Mother “, ” Money “, ” Time ” was some of favorites. When they played ” Shine on you crazy diamond ” an image of Pink Floyd founder Syd Barrett was projected to thunderous applause from the audience.

The spectacle began precise, to 20,30, with many problems for the organisers, since many of the public had still not been able to enter.

The impeccable quadraphonic sound system and the wonderful effects made up fot the dismal weather.

Then it started to rain

While watching the show suddenly lightning was added to the sound effects to loud cheers from the crowd. Then comforting rain ended a night of intense heat.

The musician was supported by a great luminance infrastructure with visual effects and a great giant screen that the back of the stage occupied, where projected the classic iconographies of the film ” The Wall “, as the flying cemeteries of crossings, pigs, left factories, full fields of flowers and panoramic views of destroyed cities.

The bassist – dressed black , was joined by his son Harry Waters and eight other musicians.

With thanks to Leandro Fanzone 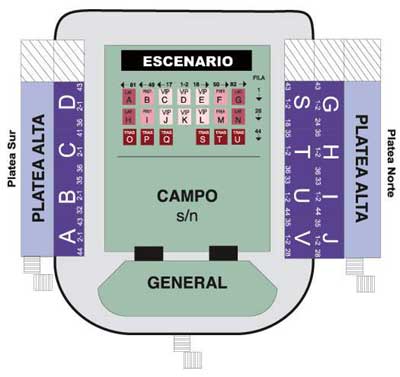 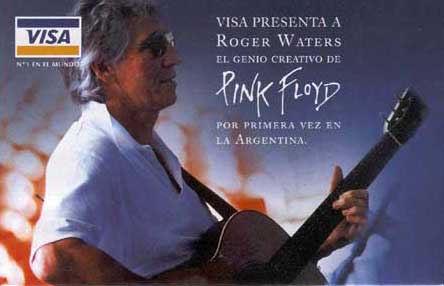 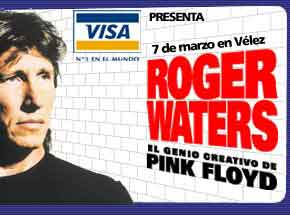 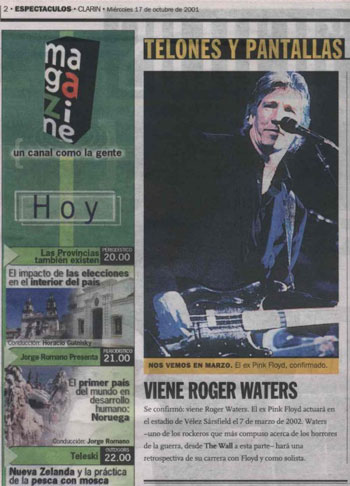 17 Oct 2001 from Clarin, Argentina’s largest newspaper. The paper is based in Buenos Aires. With thanks to Richard Mahon