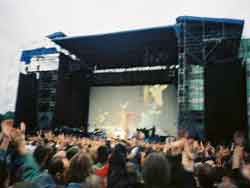 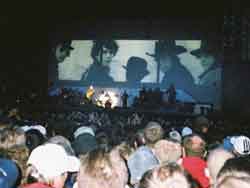 The day was very rainy and by the time we got very near the stage we were absolutely wet. However about 7 PM it stopped (it’s a miracle, another miracle – we all thought). The show started with a slight delay (about 10 minutes). The moment when Roger came on stage was incredible and he got a great round of applause from evrybody. He seemed very happy and chilled out all through the show. As for the rest of the band I must say that the backing singers left a huge impression on me (especially PP, who was wonderful in Perfect Sense). Snowy was great on his guitars (It’s A miracle, Set The Controls) but he didn’t do well in the intro of Shine On, but who cares? Andy FL played a terrific part in Money, but he seemed to be hiding behind Roger’s back for most of the concert. And I must say I wasn’tpleased with Chester singing and playing. I mean, he was trying to sound like Dave, but it’s simply impossible. He should try to play his own notes. His singing was clear but simply not interesting, totally impassionate (is that the word?). Keyboarders? Well, mr Wters junior did well, but with no special moments. Andy W was simply hiding behind his keyboards and didn’t play a single solo. Graham – good work, especially on Dogs. The sax player, Norbert Stachel – nice. 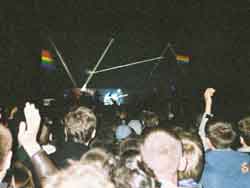 As for the setlist – guess what – it was the same as always. And that kind of worries me. Doesn’t he ever get bored? And for me the most ejoyable part was the solo stuff that he played. Perfect Sense and Amused To Death were brilliant. He should do more of that stuff instead of WYWH, Time, Dogs or Comfortably Numb which only reminded me how important Dave was for Pink Floyd (both as a performer and writer).

The highlights of the show were for me definitely In The Flesh (incredible Roger’s entry), Set The Controls (although I never really liked the original), Shine On part two (WOW!!!), Perfect Sense and I’t A Miracle. One real disappointment was for me the lack of Snowy’s solo in ABITW. Is that the way they always do it on this leg of the tour? And well, I’m not sure whether it’s a good idea to conclude the show with Flickering Flame (a friend of mine calls it irronically F@*kering Flame:), I mean it’s not even half as strong as Each Small Candle. Although, I must admit this version was a lot better than the demo. But it should have been played somewhere in the middle. And speaking of middle, the break was shortened to five minutes due to the possible return of the horrible rain, which luckilly didn’t happen.

And that’s that. An evening with one of my biggest (also literaly) heros. One of my dreams finally came true. Thank you Roger. 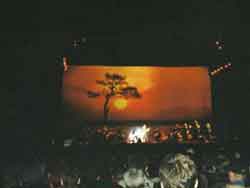 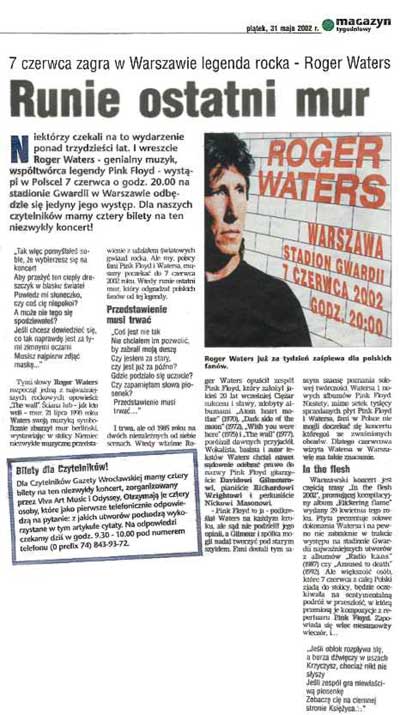 This article is from “Magazyn Tygodniowy” (Week Magazine) Friday, 31 May 2002 The heading “Runie ostatni mur” means “Last wall will collapse” Thanks to Marlena