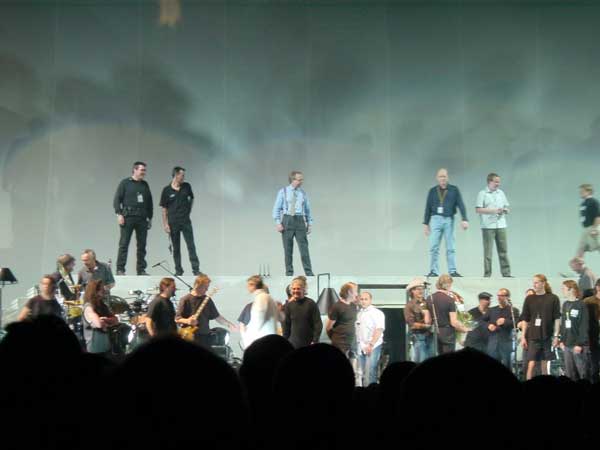 Roger thanking his crew on his final big night Just before taking a picture of the audience with the house lights on.

All show pictures with thanks to Simon

Set The Controls. Hear Nick Mason on drums. Thanks to John E

In the words of Roger about listening to music ‘if it moves you or not, nothing else is as important’ this is an account of such an evening!

I can’t believe it, I’ve missed the first 30 minutes of Roger’s show, and we’re still sitting in a London traffic jam at 7.30, still 4 miles from Wembley. I know there is no way we can get there in time. I’ve been looking forward to seeing Roger for years and I’m finding it hard to keep back the tears. My husband does his best and we arrive at 8.30. Lots of fans still running in, I can hear DOGS pounding out as we race into the arena and find our seats. I lean back and watch Roger looking great in black, finish playing a magnificent version. The atmosphere is electric; you could almost cut it, the way the fans are responding to Roger and the band and vice- versa! Everywhere illicit substances are being puffed, I sense this going to be a great evening! There are 2 giant screens to the side of the stage, and every time there is a close up of Roger, there’s much clapping and general worship! SHINE ON is stunning, with an ethereal photo of the wonderful Sid Barrett on the back screen. Everyone sings along, not just the chorus. That sets the tone, from then the audience sing every song, it is all very emotional. Roger is relaxed, quite a lot of chat, then a great surprise on SET THE CONTROLS Roger says he wants to do something different, and introduces Nick Mason. Absolute pandemonium as Nick walks on stage. We all leap up and Nick gets a roar of approval. He does well, must have been practising, interesting!!!. Another standing ovation at the end, and Nick gets a hug and a kiss from Roger.

The DARK SIDE OF THE MOON classics are beautifully played; there is no sense of any feeling of being jaded or not bothering. Snowy White——– I’m sorry for any doubts!!!

The audience appreciate Roger’s solo work, he sings with an emotional quality that is really moving. Most of the fans sing along which provokes an appreciative smile from Roger. He is now flying and it’s wonderful to watch the interaction between Roger and his fans. The band finish with a storming COMFORTABLY NUMB, Chester and Snowy White sharing the solo. All the words are roared out and Roger goes from one side to the other encouraging even more effort. Roger then gets all the backstage crew on to have their photo taken, and the cheering doesn’t stop! The crowd are so high, that I feel it’s going to be hard for Roger to bring them down for FLICKERING FLAME, he just about succeeds!!

Thanks to Roger and the boys, please do it again soon!

With thanks to Jenny Riley

Nick showed up again tonight and played considerably better than last night. Overall I thought the whole show was better – probably they were determined to go out with a really good one. And not content with introducing the band, Roger got the whole crew on stage to have a team pic for his photo album, plus all the girls got flowers. Old misery guts really is mellowing in his old age. 🙂