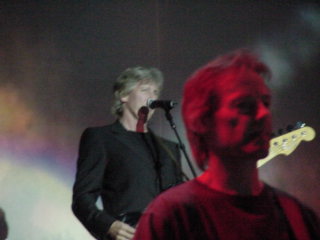 Others appearing at the Caracas Pop Festival 2002 are Korn, Alanis Morissette, Papa Roach and No Doubt . The festival runs March 13-17 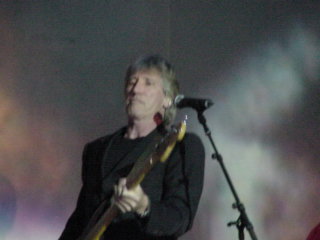 Quite an inspiration was this exceptional concert I’ve been to. first ten in line to enter, first row, first everything. That’s the experience I lived yesterday at Caracas. Unexplainable the feeling of being “in his range”. While waiting I gave 2000 orange fliers away with the request of his unpublished song “FLICKERING FLAME”. Everyone was excited and I thought we might convince him about playing that touching song. I also drew a couple of banners so he could read our request.

After waiting 9 hours, heat and sun, the concert started with the overwhelming ” eins, zwei, drei.” 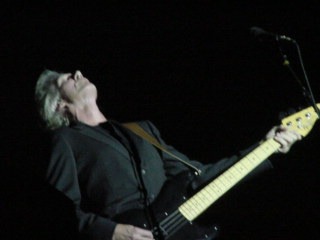 I couldn’t believe I was ten meters away from Roger, never been so close, never so excited about a concert before, including my attendance to In The Flesh Tour 2000 at West Palm Beach on June 3rd.

The hole thing was a combination of his greatest work and one of the greatest performance ever. We were yelling and screaming as the concert was taking place. Snowy White looked at the banner and smiled, Roger looked too and gave me a thumb up and a smile. Every song was magical and right before Brain Damage there was a silence, I screamed:

“ROGER!!!!”, what a surprise his was: “WHAT???” the crowd got mad and Roger said: “Why are screaming if I’m speaking to this guy over here” pointing at me. I went speechless and a loud: “HELLO!!!” came out of my mouth. I felt out of space: Roger Waters answered me!!!!!! What a reward for being his fan!!!!.

Comfortably Numb started, and so did everyone with the orange fliers I gave away and the Flickering Flame wish, he finished the concert and started to wave goodbyes and thanking phrases, we all yelled and asked him to come back.

He came back and said something about the next song, he had only sang it in South Africa and Brazil, and the reason of singing it was our persistence and again pointed at us. Then one of the greatest poetry he had created began, speaking about his freedom ideal and his justice wish.

I felt like everybody in the world could understand and speak my own language, the language of mercifulness.

I’ll like to believe I was one of the guys responsible for that last gift to all of his fans.

Now back at my city Maracaibo an emptiness fulfill my being, I feel orphan, I guess that’s the way everyone’s feeling right now .. Thanks for everything Roger… 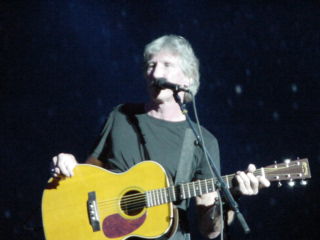 At eight o’clock we were surprised by the fireworks that marked to the beginning of the performance of the insurmountable Roger Waters, without a doubt the king of the festival. In the flesh, the first song, took the shouts of the fanatics who deliraban with notes of each instrument, which were completed with sound effects and of light. Of bottom the figure raised of Waters on a screen where scenes of the The film projected wall. Concluded the first subject the scene was darkened and began to be listened to the sounds of a helicopter which appeared soon flying over and illuminating with lights of colors the spectators who received inflamed the surprise. Thus the second Another subject began brick in the wall, to follow soon with Mother, in which it let the low one to touch a classic guitar. In Venezuela a concert with cuadrafónico sound was listened to for the first time: surround sound, which it contributed greater value to the performance of Waters, who one took a walk by discs like Animal, with his Dogs cut, of Wish you where here, the subject homónimo, Shine on your crazy diamond and Welcome to the machine. After about 75 minutes an interval of twenty minutes happened previously announced by the organizers.

Finished the rest same Waters with atuendo the black one reappeared with whom she initiated his musical intervention, interpreting Set the controls, to which they continued 75 minutes more of performance with subjects like Breathe, Time and Money, of the Dark disc side of the moon. They continued 5:06 a.m., Every Strangers Eyes, sense Perfect (parts 1 and 2), Bavery, Its to miracle, Amused to dead, Brain damage, Eclipse, Comfortably Numb, to conclude with Each small candle and Flickering Flame. 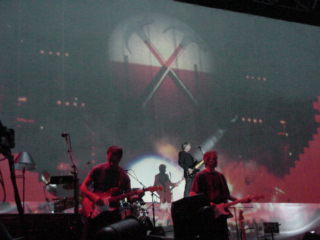 This was the best night of my life. I just wanted to thank you for arranging to have your Flickering Flame posters handed out. Many people were raising them . At first we thought that we had wasted our time but your posters seem to have worked because they played it. 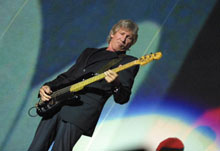 This was the greatest concert I have ever been… I found some VIP tickets for free but i got into non-VIP area because the VIP area was very far from the stage. I only need to see Pink Floyd to die happy…. 🙂 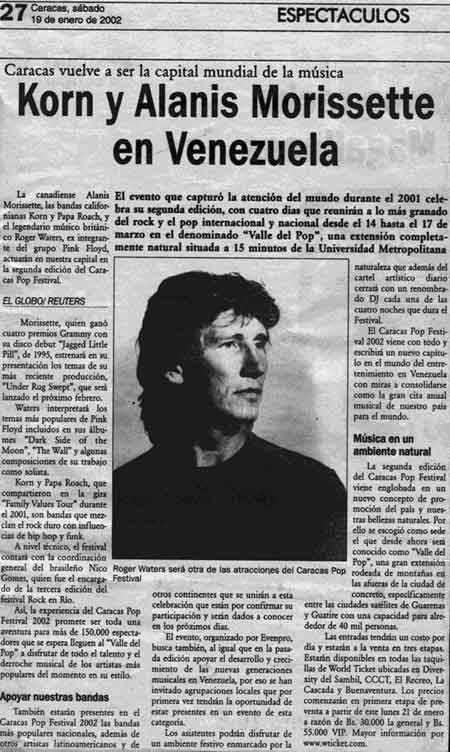 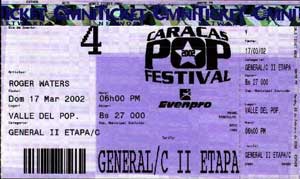 With thanks to E.C.