Gig was much much better than I expected. Unluckily I missed Breathe arfer the intermission, but I ran like hell to hear Time. If I had to compare the version of Comfortably Numb from Pulse to the version performed at Roger’s show I would have to say this one didn’t loose a bit. I even think it was better. Roger and mates were in good shape. Myself and my 2 friends had seats middle and in row 21 so that made the show even better. One other my friend had seat middle in row 3. No cameras or any other recorders were allowed to Arena, but maybe we get some images later. 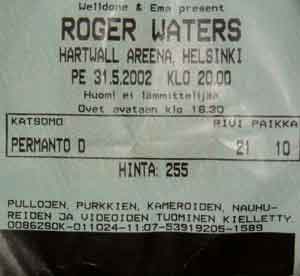 In The Flesh 2002 is Roger Waters’ first tour outside the US for 18 years. His In The Flesh concert showed the Hartwall Arena full of fans which one’s Pink after all. Compared to the the megalomanic Pink Floyd shows in the 90s Roger Waters seemed to trust in relatively small amount of equipment. The most notable object on stage was a large screen and a smallish wall. The set also included some lamps and tables, but the rest was just the amps and lines of Stratocasters waiting for the musicians. I thanked for some higher powers for the numbered seats since I got my tickets from the second row.

Before the show I had some blasphemic thoughts about Roger criticising Pink Floyd greatest hits shows and then doing practically the same himself, but as soon as the show got going I knew I was wrong. His attitude was so humble and he seemed to pretty much enjoy being up there. The setlist was the tour standard lasting about three hours with the intermission.

Personally I’ve always enjoyed a lot of the strong visual side of Roger’s music. The compositions create lively visions themselves, and get extra boost from the phenomenal artwork which have grown to be a part of the music itself. The Arena concert included a lot of magical moments – the marching hammers during In the Flesh, the slowly fading Syd Barrett imagery in SOYCD, the DSOTM pulse… There was also some new artwork by Tim and Katya Coupland (according to the tourbook) which was nice, but never got to the same level as Storm Thorgerson’s or Gerald Scarfe’s best shots.

I’ve seldom experienced such intensity and feel in a rock concert. The audience sat silent during most of the songs, giving only applause after some solos and between the songs. (It really was a taper’s paradise…) It was most enjoyable to listen to SOYCD 6-9 live with almost no disturbing noise! The slowly evolving Waters compositions and lyrics fit the situation perfectly.

The show itself was a slowly evolving memorial of Roger’s career so far. The set didn’t contain any surprises being almost identical with the In The Flesh Live CD. Still, I would have been nice to hear masterpieces like Hey You or Us and Them. Or Echoes. Or… Well, in my dream set the three hours would propably be way too little.

Roger himself seemed to be in rather good shape though he missed some high notes or let the background singers take care of them. Especially the solo career songs in the middle of the second set did the best job at giving goosebumps. Feeling that way I wonder why the have to keep on playing Money? It was the only song sounding boring and outdated despite the clever and ironic lyrics… Where was The Powers That Be? Or The Final Cut?

The sweet sounding guitarizmo of David Gilmour was replaced by three other fellas: Andy Fairweather Low, Snowy White and Chester Kamen. Most of the time their playing sounded enjoyable, but some times Kamen’s playing lacked soul… He had learned all the Gilmour parts note by note, but the feel side was way beoyond. I missed Doyle Bramhall who dared to play from his soul and not just copy somebody. Snowy and Andy seemed to have fun on stage which also sounded from their playing. Snowy let us hear some really good sounding licks with his old Les Paul Goldtop.

Another thing I missed was Each Small Candle. The replacing tune Flickering Flame never got to the same level which is a pity. The Flickering Flame just didn’t have the something what a song closing a concert of this caliber should have. Luckily the show had a lot of highlights too – a magnificent version of Dogs, the magical, mesmerizing feel with Set The Controls and SOYCD 6-9 in the first set and the Waters solo material in the second let Roger’s dark visions take their places.

This maybe wasn’t the gig for somebody looking for extraordinary musical innovations, but as a sensitive evening for a Waters fan it was perfect. The sound with the quadraphonic effects was excellent, visuals looked good and the audience contained no floyd-roolz-doodz. Roger showed he still has energy to recreate the magic every other night but will we be able to hear something new one of these days? We’ve heard rumours about some new stuff and heard a couple of new songs. Wish for the new album and the opera to get finished though every year is getting shorter and he never probably seems to find the time…

With many thanks to Aleksi Manninen 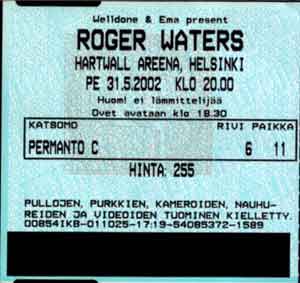 Thanks to Laura Lampinen