All pictures on this page thanks to Rami Harfouch

Pink Floyd founding member Roger Waters has embarked on his first international tour in 18 years, making stops in some dangerous territory. According to NME, the Flickering Flame World Tour 2002 played in Beirut last night (April 17), which lately is regularly buzzed by Israeli warplanes. However, that didn’t detour the more than 6,000 fans that attended last night’s show.

Waters played a wide array of material, spanning from his days with Pink Floyd with timeless classics like “Wish You Were Here,” “The Final Cut” and “Dark Side Of The Moon.”

However, Waters received the largest audience response, and not surprisingly so considering his geographical location, during a rendition of “Perfect Sense Part 1” particularly during the lyrics “The Jews killed the Arabs and the Arabs killed the hostages, and that is the news/Is it any wonder that the monkey’s confused?”

Waters had a very laid-back attitude when it came to the possibly dangerous situation he may be in by playing in Beirut, saying he had a bigger chance of being hit by a car than dying in a bomb explosion.

On top of his world tour, Waters is also releasing an album of previous work and some new material dubbed Flickering Flame – The Solo Years Volume 1. The album contains recordings from Waters’ past albums The Pro’s And Con’s Of Hitchhiking, Radio K.A.O.S., Amused To Death and In The Flesh. The album also has some Waters rarities, “Towers Of Faith” from the 1987 soundtrack to When the Wind Blows and “Lost Boys Calling” from the 1999 soundtrack to The Legend Of 2002. 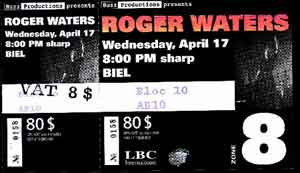