Thanks to Pavel Simek

Caught the 9.30 train from Berlin to Prague for another show. Got to Prague at 3pm and headed to the venue to sort out somewhere to stay. Luckily the venue is only a short walk from the train station we had arrived at. I checked into the hotel right next to the venue The room overlooked the stage door!! Went to a cafe that seemed to be a part of the venue – beer was 20 Kr – that’s about 40pence/60 US cents and the food wasn’t much more expensive – but it was great. In there we met some members of the Czech Pink Floyd club who were planning to unveil a banner that said “Welcome to the Semtex Machine” lol

I had bought my tickets online and had to go to pick them up in the centre of Prague which was a metro ride away – but got into the centre of the city and it is still as beautiful as I remember it.

When I returned I was told that the ticket office had front seats on sale!!!! Very bizarre that there were front row seats on sale at the venue a few hours before the show started – but they were 2200 Kr – which comparatively seems a colossal amount.

The venue is a hockey arena but from the outside looks dreadfully dilapidated. Inside wasn’t that much better. There were very flimsy plastic seats on the floor area and poor seats around the sides but the rear section of was just concrete steps for standing!!! The stage was not the normal affair – the huge speaker banks weren’t hanging from the ceiling – they were suspended off a temporary frame erected around the stage – very low to the ground. The surround sound speakers were on temporary platforms in the seating areas at the side whilst the projectors were at the rear in the balcony seating area. But this seemed to make for great surround sound and fabulously clear guitar sound. I did notice that the guitars seemed to be coming out the front whilst the keyboards were coming from the sides.

Another odd thing was that the seating blocks at the side in line with the speakers only started half way back on both sides – maybe the venue had heard about how loud the show was? This was the smallest venue that I had been to on this tour but in it’s odd state is one of my favourites. I must also say that security was none existent. After the show me and Phil just walked backstage and out the other side.

This was the best sounding show I’ve seen – I was in Row 10 and noticed very early on that the guitars were incredibly clear. The band also seemed to be in great spirits with Rog really getting involved with the crowd. At the beginning he spent some time at stage right interacting with the one person that stood up in the left seated area! Singing directly to her.

The crowd started very subdued and their reactions were difficult to predict – some songs got great receptions – others got very muted applause – but there was no pattern – even some of the Dark Side stuff wasn’t that well received whereas Amused to Death got the loudest cheer of the night. Another Brick was greeted with silence and got very quiet applause afterwards.

After Mother Rog spent some time talking to his guitar tech – but from where I was the guitars sounded great – maybe something else was wrong? The projectionists also seemed to be having some problems as at one point then both went out, just after the image on screen shook and had lots of horizontal lines running though it. It took a few minutes before an image reappeared.

The card game during Dogs is still played on the South African flag set of cards! Wonder if they will last the whole tour?

Something I have noticed and it happened again is that they seem to turn the sound up for the second half – why?

At the beginning of Time – Graham dropped his drumstick – probably the worst time he could have done it 😉 Also as lines “half a page of scribbled lines” was sung, Rog gestured with his right hand writing on a piece of paper – never seen him do that before.

PP excelled again and again, as did all the backing singers today. The whole show was fab and is probably my favourite so far.

On this tour I have met lots of people I have traded with over the years – and last night was no exception. Always great to put a face to an email address 😉

Best show so far, most interesting venue and quietest drinking sessions which given the cheapness of the beer was odd

Review thanks to John E

Thanks to Marek Grzesiak

Thanks to Marek Grzesiak 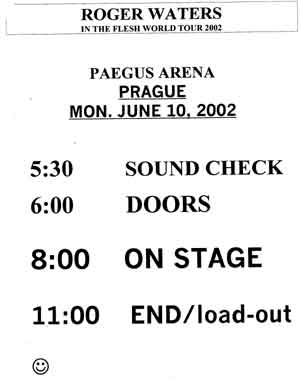 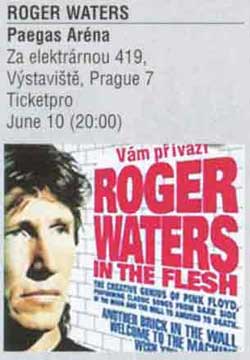 With thanks to John E 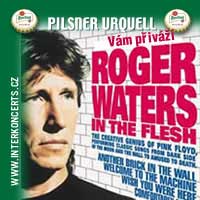 Thanks to Martin Smisek